Why would you need merely the term "collection" for pitches, but not "scale"?

In his lecture Understanding the Fundamentals of Music from 2006, Robert Greenberg says (on p. 119 of the transcript) this quote. Scan of that page is at the bottom.

Despite its overwhelmingly common usage, the word scale is, from a conceptual point of view, used incorrectly a good 99% of the time. The word scale is derived from the Latin word for ladder. So, when we say "C-major scale," what is implied is a stepwise ordering of pitches, climbing up or climbing down. The world scale, therefore, cannot properly be used to address a group or set of pitches in which no ordering is implied. That's where the word collection comes in. By using the word, collection, no step-wise ordering is implied. Instead, the word collection addresses a group of pitches arrayed around a single, tonal center (or tonic) pitch. Thus, a C-major collection means a collection of pitches in the major mode, arrayed around the pitch C. Now, I know this might sound like terminological nit-picking, but by using the proper terminology, explanations, conceptualization, and comprehension will be much easier as we progress through our examination of pitch. Trust me on this, please. 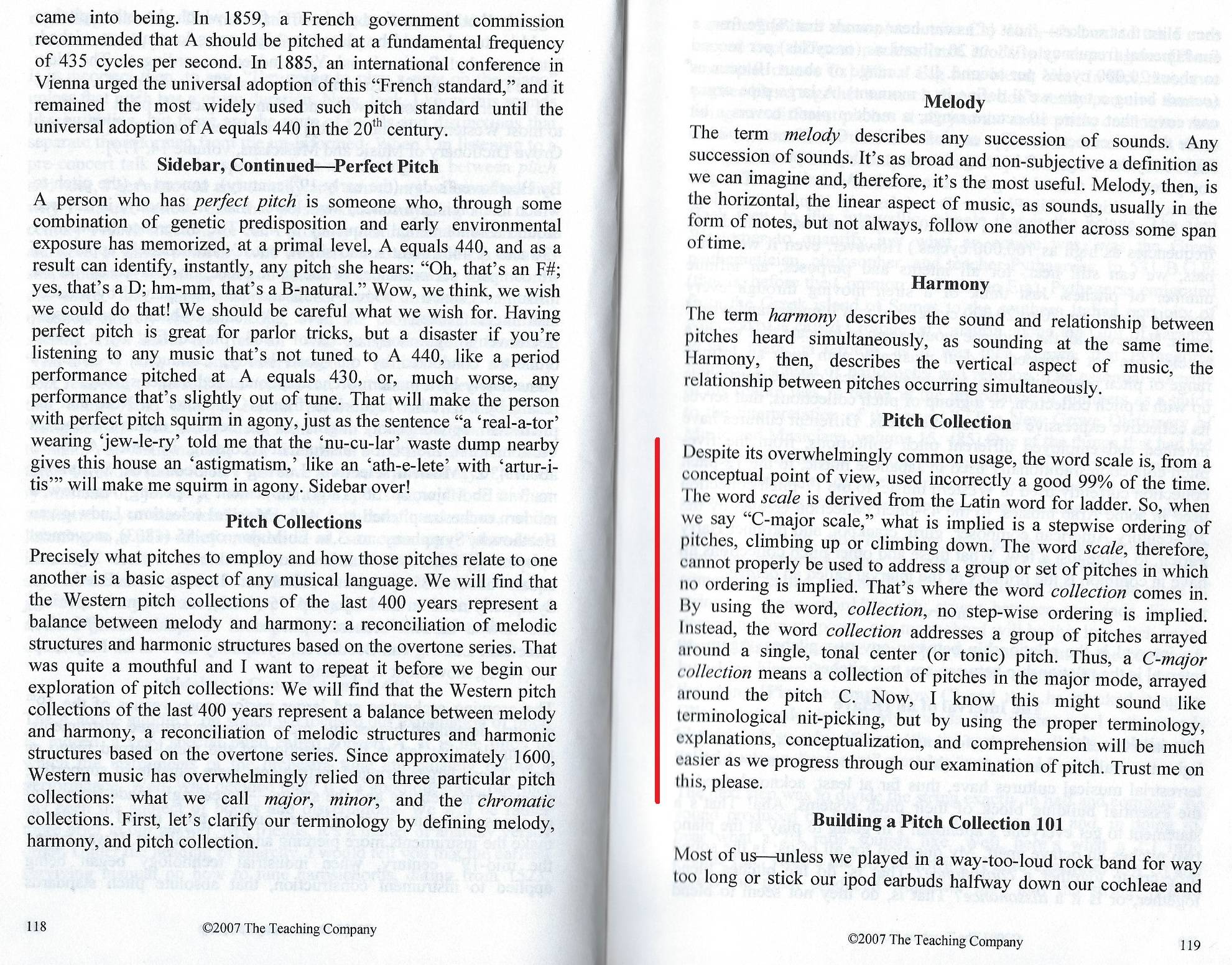 The author's claim here is that a scale is only the stepwise ordering (hence "ladder") like that shown in the following:

Contrast this with the following Debussy excerpt:

In my experience, the distinction between "scale" and "collection" mainly becomes important when dealing with twentieth-century (and beyond) techniques like modes. We would never say that "the C-major scale is the same as the E-Phrygian scale," but we can say that "the C-major collection is the same as the E-Phrygian collection." It's a bit like the square and rectangle issue: a scale is a collection, but a collection isn't necessarily a scale.

(Oh, and as for your request to quote only reputable musicologists: does having a PhD in music theory count?)

So I like Richard's Answer, and I think it's good, but I think it's worth adding as an addendum that his definition of "collection" actually disagrees with the author's. The author says :

Now, leaving aside that the author in the quest for terminological precision has used the very vague and difficult to define term "arrayed around" , the author clearly feels that "C major pitch collection" should denote the set of notes of the C major scale, with the tonic of C, but not necessarily arranged in the step-wise order of a "scale"

In this sense, it would be incorrect to describe the melody of Happy Birthday (below) a "using the C major scale" because there is no "scale proper" "true scale" (to coin new terms for an explicit, step-wise scale) in the melody. This would mean that it would only be correct to describe it as using the "C major collection".

According to the author's definitions, it would be incorrect to refer to Scarborough fair as using the "C major pitch collection" though, as it is centred around the "D dorian pitch collection"

However, Richard makes the following point:

In my experience, the distinction between "scale" and "collection" mainly becomes important when dealing with twentieth-century (and beyond) techniques like modes. We would never say that "the C-major scale is the same as the E-Phrygian scale," but we can say that "the C-major collection is the same as the E-Phrygian collection." It's a bit like the square and rectangle issue: a scale is a collection, but a collection isn't necessarily a scale.

This means that, according to Richard, it could be perfectly correct to describe Scarborough Fair as using the "C major pitch collection", since it uses only the notes found in that collection.

So in our quest for more precise terminology, we have ended up with a different ambiguity. We've resolved the ambiguity of the word scale meaning both:

1) a set of notes played sequentially in a stepwise motion
and
2) a restricted set of notes, with a tonic, used to construct a piece of tonal music

but introduced our own definitional ambiguity for "collection" of:

And in addition to this new ambiguity, I don't think the original ambiguity for the word "scale" actually causes problems, because it's clear from context whether we're talking about an "actual" sequential scale being played in a piece of music, vs "the scale" as a set of notes used to construct music.

Much like the word "alphabet" might mean "the set of letters used to write a language" and it could also mean "ABCDEFGHI..." in order, the difference between "English uses the Latin Alphabet" vs. "He wrote out the English alphabet" is clear from context, as is:

If disambiguation is really required you could say you could substitute scales and scale respectively for "stepwise C major scales" or "the notes of the C major scale", but imo neither is required in either of my (relatively typical) examples.

In conclusion, to borrow the verbage of to the author:

Now, I know this might sound like terminological nit-picking, but, for these reasons, I'll keep using "scale" for both of its conventional definitions. Trust me on this ;)

To my mind, the word "scale" does have two distinct common usages; when analysing the tonality of a piece of music, it often does mean 'collection' insofar as order in time is not a primary consideration; On the other hand, there is also the pedagogical form of the scale which presents the collection of pitches ascending or descending in time order (i.e. what you'd play if asked to present the scale in a music exam).

However, I think the author here goes a little far when he says:

The word scale... cannot properly be used to address a group or set of pitches in which no ordering is implied.

The word pitch itself refers to the sensation of frequency, which by most standards is an entirely objective, measurable concept. Any group of distinct defined pitches has an inherent order corresponding to the frequency values; In this sense, even the 'non-pedagogical' usage of scale still refers to something that has an order.

The appeal to Latin also seems a little over-wrought. Can the author objectively establish that the importance of the meaning of "scala" is climbing? I always considered that the important aspect of the analogy was that the "rungs" were at defined points in pitch space, corresponding to the notes defined to be in the scale (just as the rungs on a ladder are at set heights).

In this very book, the author concedes that the "overwhelmingly common usage" of scale is to refer to collections of pitches that are not ordered in time. He characterises this usage as "incorrect", but as discussed above, his argument seems specious.

Of course there is still a conceptual difference between the idea of a set of pitches separated in time with time corelating to pitch, and a set of pitches not separated in that way - and It would seem perfectly reasonable for an author to say that they will use "scale" for the first concept, and "collection" for the second. But it's not necessarily reasonable to say that the common usage of "scale" for the second concept is incorrect.

I never encountered the idea that - in English - scale means exclusively the tones all in step-wise order... except on this StackExchange forum! That singular meaning of scale has always struck me as strange.

Obviously, specifying the tones in step-wise order construes a performance aspect. Supposedly we could only refer to a scale when we have a step-wise execution of tones. That's a very concrete meaning.

I think the clearest proof of the point is the term scale degree. Scale degrees are referred to with no concern for the order of tones. The degrees are obviously identities in a collection of tones related to a tonic. That is an abstract idea. It's common to refer to a scale abstractly and not necessarily meaning a step-wise sequence.

Please quote only reputable musicologists and music textbooks. Are there examples from them where "scale" was misused and ought be replaced by "collection"?

I think the problem is going to be a definition versus usage.

...just about any definition of scale will include various wordings about tonleiter or conjunct motion.

Usage of term scale where there isn't a tonleiter: 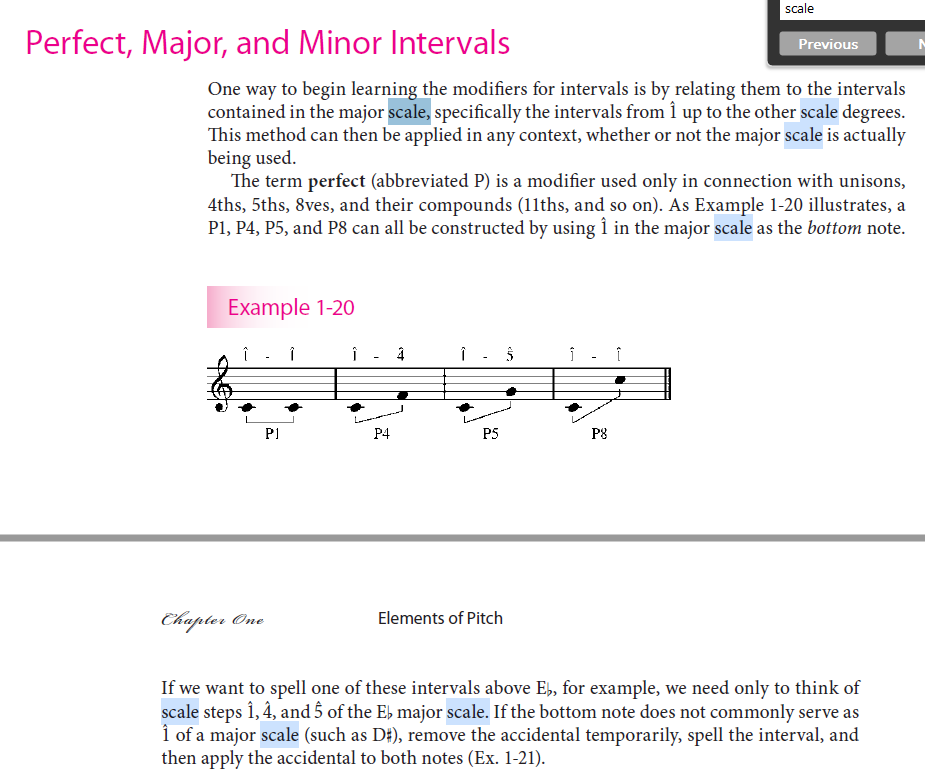 ...the author's could have used a wording like "^1 of the Eb major collection", but they didn't. Not because they are misusing the term, but because it isn't necessary.

...the word scale is, from a conceptual point of view, used incorrectly a good 99% of the time

It seems the author is odd one out. Kostka/Payne use scale in the general sense of tone collection and many others do the same.

Personally, I don't have any problem understanding the two meanings of scale from context. Examples: "I practice my scales everyday." The context is performance, they are talking about tonleiter. "This scale in sixteenth notes is merely an elaboration of a single chord." That's a concrete example of a tonleiter. "In this passage in C major the F# is chromatic and is a temporary leading tone from the G major scale." That usage means key, tone collection, tonality, etc.

If there was a deeper significance to the distinction Greenberg makes, I would be on board with him. But I just don't see it.

The author states that the word scale is used incorrectly 99% of the time. I find this claim to be wrong. In 99% of the time, we give functions to notes, bringing order to this collection. The vast majority of notes in compositions have two dimensions: a function (tonic, mediant, ..) and a pitch class (any semi-tone in the octave).

I still don't understand when you need collection but not scale. In what contexts would you need to discuss pitches without step-wise ordering?

In Music Set Theory, only one dimension is used - the pitch class. From this perspective, a collection rather than a scale could make sense.

5
What's the term for the intervals between notes within a scale that produces a chord
5
Naming pitch and interval collections
47
Why does the scale have seven (or five) notes? Why not six?
20
Why is it called the chromatic scale?
4
Is there a standard term for "has the same notes"?
2
Italian term for returning to the original tempo, but with more energy (or slightly faster)?
4
What would you call this scale?
1
What is the term for these scale repetition patterns?