I recently purchased a tenor recorder and can play the soprano recorder.

Does one play the Alto note line for the tenor recorder? 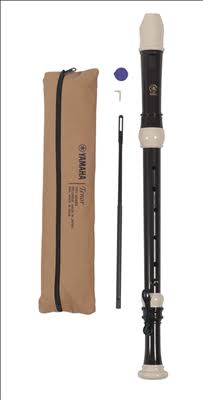 It depends on the music. Normally, in sheet music intended for recorder, you play the line that has the recorder's name. For instance, many quartets are for soprano, alto, tenor, and bass recorders, and of course the tenor plays the tenor line. But if you are playing a duet that's marked soprano and alto, the tenor might well play the alto line, if it doesn't go too high.

The soprano recorder plays quite high notes, so the music is written an octave lower than it sounds. For tenor, it plays exactly the pitch which is shown on the music.

Since the notes it plays are from middle C at the lowest, the music fits nicely on the treble clef.

You can always play any treble clef soprano music - it will come out an octave lower than it would on a soprano. Ideally, you need to play the tenor part if the music is written out for several different instruments. It's also possible to play the alto parts, as the higher notes on tenor are within that range. Although it makes sense if there's an alto player, that they play the alto part, leaving a lower part for tenor. Obviously if tenor parts are lacking, double up on the alto (or even soprano) parts.

Not the answer you're looking for? Browse other questions tagged recorder tenor or ask your own question.

7
High D on Tenor Recorder
7
Is piano and recorder sheet music the same?
3
Learn the alto recorder
3
Tenor recorder - Cannot reliably play middle C
0
The low e note on my tenor recorder is sharp
3
Overblown octaves on a tenor recorder
1
Recorders and Musical scores
6
How do I fix a stuck Joint on a plastic recorder
0
Recorder alto or soprano german or baroque
3
Which notes are played