Formula for finding relative chords/scales of the same notes

Is there a way to quickly calculate relative/enharmonic chords or scales that are based off the same notes as another, like you can with the notes themselves, i.e. C being equivalent to A minor? For instance, if you have a C7 chord, which has one flat, making it the equivalent of an F Major chord, correct? Is comparing the key signatures the only way to quickly find a relative chord?

...Is comparing the key signatures the only way to quickly find a relative chord?

Not necessarily for relative chords.

Relative chords are always a minor triad below a major triad with the root separated by a minor third.

The example above shows relative chord pairs - C & Am, G & Em - we don't really need to know the keys that are indicated before the Roman numerals. In fact, you will notice that pair C & Am in C major flip their order to Am & C in A minor when we take note of the tonic and mediant chord identities in the key. It's nice to know that about the relationship to the keys, but it isn't absolutely necessary.

You can apply the same rule for chords to scales but swap out the term root (for chords) with tonic for scales. The relative scale pairs are a (natural) minor scale below a major scale with the tonics separated by a minor third.

However, I think it may best best to know relative scales by their shared key signatures for the sake of know the specific tones in each scale. So it's fairly easy to say that B minor and D major are relative scales without knowing the key signatures (we know this because the tonics are a minor third apart) but it's very helpful to know that both scales have F# and C#.

Of course all of this relies on knowing the intervals of the musical alphabet. If you don't know A to C is minor third (and not a major third) you won't be able to find relative pairs.

...if you have a C7 chord, which has one flat, making it the equivalent of an F Major chord

I think you may be fixing up relative major/minor and equivalent with some way to know a particular chord belongs to a particular key.

C7 does indeed have one flat, and so does the key signature for F major, and the tonic chord of F major is the F major chord. But, that doesn't make C7 and F equivalent chords. C7 is the dominant chord of F major.

If that is sort of what you were thinking, the formula won't work for all chords/keys. Example, the Bb7 chord uses two flats and is the dominant of Eb major, but Eb major uses three flats. The number of flats doesn't match in that case. The chords B7 and Eb major both used two flats, but again that isn't a rule for all tonic and dominant pairs, example: Ab7 dominant to Db major, none of the flat counts for chords or key match.

If you meant some other association of chords and keys, please update your question with some more detail.

I’ll try to answer this once more, but because many words used in the question are borrowed from different concepts than what is actually meant, we have to get some things straight first:

The real question is something like this: if I’m presented with just one chord alone without any context, how can I quickly know possible contexts where that chord might occur, and the sets of other chords and scales that would be used in each of the contexts. And “context” here means a key, centered around a tonic note, and with a basic scale and basic chords and all possible harmonic changes that might happen inside the key while not losing track of the tonic.

If taken literally, this is an impossible task to do with any sort of theoretic logical deduction, because it produces too many possibilities. For example a popular song has F#7 - B7 - E7 - Am. If you see just the F#7 chord, would you consider the possibility that the key might be Am? How about if the same motion is done with dim chords, so A#dim7 - D#dim7 - G#dim7 - Am. Deduction rules for any dim chord would list basically all contexts as possibilities.

Or, an A major chord is often used to get to a Dm chord like: A - Dm - E - Am. If you see an A major chord, remember to add to the logic rules that the key can be A minor. Or the Cm maj7 example… let’s make it simpler: Cm. The key might be G major. It’s a common trick to use a minor IV chord. The list of rules and tricks to consider is endless. Any chord or note can be used in any key. But once you have some context: bits of preceding chords and melody, then the list of plausible possibilities is narrowed greatly. You feel what the tonic might be.

The only practical way to obtain the ability to do what you want is: practice, experience and training. You play songs in different keys and you develop a sensitivity to feel where the tonic, i.e. home base note is. You instantly remember sets of chords that are normally used in each key. You just think of a key, and it instantly brings a set of notes and chords to mind. You develop a sensitivity to feel when the harmony is leaning on the subdominant or dominant or tonic side. When you know your basic tonic - subdominant - dominant thing well, and then you encounter a secondary dominant, you’ll understand how it works. When you’ve played a few songs in G major that has the C minor trick, you’ll remember it. Once you’ve played tritone substitutions, you’ll remember that a dominant V can be replaced with a 7th/9th/13th rooted one semitone above the tonic.

Check out the circle of fifths... study it, it will change your life. The inner ring are the relative minors of the outer ring. 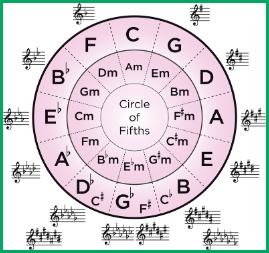 The major and minor chords within a key can be looked at and grouped “SHAPED” two different ways.

C major for example Method 1: the major chords will be on each side. The relative minor is below either the remaining two minor chords on each side.

The diminished chord also follows just after the the last minor chord on the wheel.

This a great visual tool to reference. It will help open up your understanding of choosing which key you want your music to be in. For example if you play a C major chord followed by its relative A minor.. you still have the ability to decide if it’s going to stay in that key (C major /Ionian) or F Major (C mixolydian) or G Major (C Lydian). It all depends on the remaining chords you chose to fill that “SHAPE”.

Please note this is only for the Natural Scale, although it covers the majority of the westernized music we hear today.

Not the answer you're looking for? Browse other questions tagged notation learning beginner or ask your own question.

17
How to memorize seventh chords and inversions on piano?
26
How many (major and minor) keys are there? Why?
15
What is the best way to learn scales in order to improve improvisation/writing of lead guitar parts?
8
What does the roman numeral notation mean for this borrowed chord?
3
Do notes from non-natural minor scales fit well in the associated major key?
6
Is it better to memorise each scale, or just memorise the patterns?
3
Sharps vs Flats - Formula to determine correct sharp and flat notes in a scale
5
Is there a key signature for harmonic minor scale?
10
What is the symbol for “is the enharmonic equivalent of”?