What is the relation of guitar chords to actual notes in the measure?

Often only 1 chord is played in an entire measure (sometimes more than 1 measure), but the sheet music may show a variety of notes other than the chords being played.

TL;DR: In sheet music, chord symbols are not a harmonic analysis of the song. Chord symbols are a guideline for accompaniment. It says "accompany this song with these chords". It does not say "after a rigorous and thorough music-theoretical analysis it is hereby declared and guaranteed that the following chord symbols are a complete and correct view of which notes should be felt as so-called chord tones".

It's a multipurpose vehicle, and different writers and readers have different ideas of what should be done with chord symbols. Quite often, chord symbols are used to only deliver a rough approximation of essential harmonic changes. Sometimes, people try to use chord symbols very literally and try to squeeze all aspects of the music into them, but in my opinion this is not very practical. Chord symbols can also be used in music theory classes and in composition and arrangement work, for writing down and discussing chords in a theory-oriented way. But an actual song is not a theory class.

Perhaps in this particular case, the person who wrote the sheet music thought, "the guitarists reading this will only be able to play so many different things in a single bar, so let's keep it simple". And frankly, that's a good way to think. For pianists, it's easier to change chords very fast, but if the song is to be played by a guitar pop/rock group, writing fewer chord symbols works better. In my own experience, the arrangements that I've written sitting on the piano and for groups where I'm playing piano myself, tend to have too many chord symbols for a guitar rock oriented band. For a guitar-oriented accompaniment, one or at most two chord symbols per bar is about right, except maybe for special hooks. It's a choice and a trade-off: I need to think about what sort of band will be reading the music.

Like Supercat says in a comment: "Unfortunately, publishers seldom give any indication of how their chord symbols should be used", and this is so true. Too much is left for guesswork. If the written-out notes have a iv minor chord halfway through a bar, but the chord symbols only show a IV major chord for the whole bar, than that's just plain laziness and bad quality from the publisher.

As an interesting example of how chord symbols might be used, here's one bar from the written sheet music of the tune Paint The World by Chick Corea: 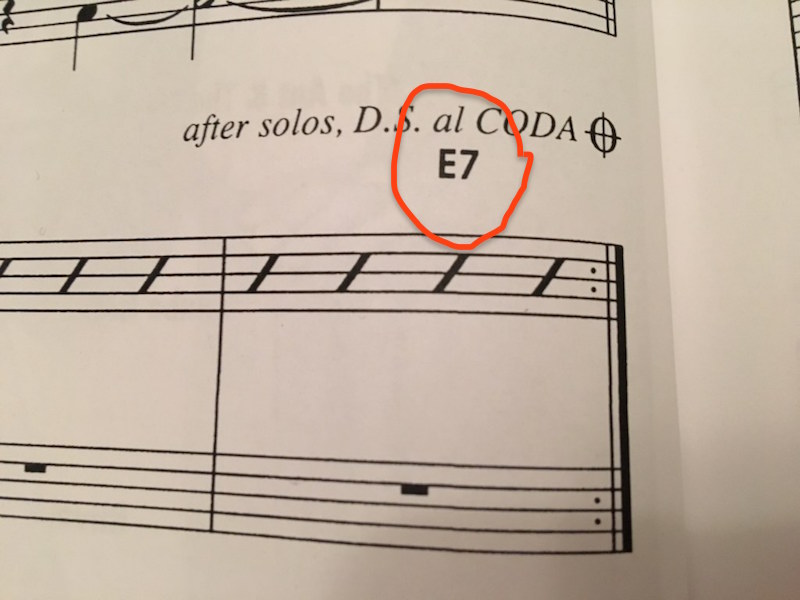 And on the recording the "E7" chord symbol is done e.g. like this: (1 minute 6 seconds into the video)

In the beginning of the song book, there's a two-page guide titled Use of Chord Symbols, Philosophy, where Chick Corea explains his principles for writing chord symbols and the reasoning behind the principles. For example, he writes:

I use chord symbols as a direct invitation to the player to improvise and add his own notes and embellishments. ...

I find it confusing to try to "write out" a voicing by only adding extra numbers and signs to the chord symbol itself. ...

This of course demands the player to be able to read notation, which cannot be assumed in many other situations. But the point is, every song book should come with such a "how to read this" guide, but unfortunately too few do.

One chord in one bar is a sort of compromise. Yes, every single note in that bar could have its own chord, but that, in the more listenable music, just makes things so busy that it's not listenable any more.

So, looking at the main notes in a bar - 1 and 3 in 4/4 time - chord tones often appear on those notes. In a bar of C, the notes C E or G may well be the 1st and 3rd beats of the bar. That's the basic idea of notes fitting chords - and chords fitting notes. Not always, mind, but quite often. It's been said that if they don't fit each other, obviously one of them is wrong!

That's not always the case, though. Take the 3rd bar of Moon River. In key C, it's an F bar, but has a B note as the main one, and in fact, the chord tones (A and F) play on the weaker part of the bar. But, it works. Writing that tune, most would have made that bar a G, or perhaps an Em chord for guitar. If they were working from what I said earlier. But it works.

Your best bet is to study many melodies, and see what chords are put to them. There is no hard and fast rule (it's music theory!), but you'll find that there are patterns of chord tones suggesting melody lines, and vice versa.

You can also try re-harmonising simple songs, and taking a chord sequence, putting a different melody over it. Jazzers make a living doing just that! So there is no magic formula, or scientific reasoning behind it. It will also depend on the thread of the melody, and the chords either side of the bar in question. So - no absolute reasons. Try, listen, like or throw out.

EDIT: you may be curious about which version (inversion!) of the chord stated may be played. If there's a chord window, usually, it shows the basic, simple, open version of that chord. But as a guitarist, you can play any inversion - a 3 string chord - the full six strings - or what you think fits best.And some will be a better fit than others. That's where experience comes in. Seeing a chord symbol, and going to the version of that chord that will sound the best.

Chords harmonize a melody - but that's not the same thing as every melody note being a chord tone. You don't need to (or want to) change chords on every beat or fraction of a beat.

So choosing a chord/harmonizing a melody is a compromise. You want most of the notes to be chord tones, and you want the ones that aren't chord tones (which are called non-harmonic tones) to make sense.

If you harmonize enough melodies you'll get a feel for where chord changes should happen. But in choosing what chord to use in your harmony you'll often find that you have many choices that work - because not every melody note needs to agree with the harmony.

Let's look at an example of sheet music...

...the sheet music may show a variety of notes other than the chords being played

Yes. In the example, in the bar with the G7 guitar chord on beat 3 the vocal part has an A and the piano part has E and A and those notes are not part of the G7 chord.

What is the relation of guitar chords to actual notes in the measure?

Those guitar chords match the basic harmony of the measure.

The E and A in the other parts which don't "match" the basic harmony are called non-chord tones.

Here is the rub: sheet music like this isn't necessarily intended to be an arrangement for an exact performance. It's more like a condensed reference sheet. Chord diagrams are given for guitarists, because so many don't reach staff notation, most pianists who read will read staff, so that's given for piano, same applies to vocalists who read.

In actual performance players might deviate from what is actually notated in the sheet music. I don't think the intention with this common format of sheet music (vocal + piano staff + guitar chord diagrams) is meant to be interpreted to mean vocalist and pianists play strictly what is notation, but guitarists are free to improvise their part. The notation choices for the different parts are simply using what is most convenient for the different instruments. Many songbooks that use this format include piano parts that don't even exist in the original records of songs! This kind of sheet music is neither a definitive score like a symphonic score nor an authoritative transcription of a performance or recording.

How an actual performance is executed will depend a lot on the actual performers and instruments. A solo guitarist/singer might just strum basic chords or they could get fancy with finger picking and adding non-chord tones. A solo keyboardist/singer might play the notated piano part exactly, or they might just read the guitar chord diagrams and improvise the accompaniment. In a group setting with a guitarist and keyboardist the guitarist might simply strum while the keyboardist plays as written, sort of realizing the sheet music close to it's original design. Or, the two might work something out before hand that one or the other might play a more elaborate accompaniment while the other hangs back with a basic chord vamp.

Regardless of all those details, the guitar chord diagrams in most sheet music simply outline the basic harmony of the song.

3
How to arpeggiate a seventh chord using only 3 notes?

27
What are the ergonomic / playing differences between the guitar and the piano?
15
What are the actual notes of each natural harmonic?
9
Guitar - How to play two-string mini-barre chords?
10
Do power chords have some kind of function/meaning?
2
Are there any specific criteria for notating guitar sheet music particular to the guitar?
2
(Classical Guitar) How to play artificial harmonic chords
7
What are (no3) chords?
10
Playing complex chords on a 6-string guitar
4
Finding the corresponding chords from sheet music