Filling in measures with rests in hybrid meters 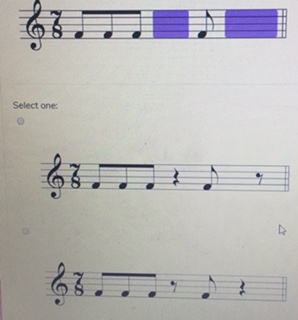 Hey everyone, I'm a bit stuck here. Apparently one of these options is better than the other but I can't figure out which. I thought perhaps I needed more context but that's all the context that's provided. Anybody know why one is more correct?

Beats are grouped in metric units of two or three beats. The general rule for notation is that it should communicate those metric units: with very limited exceptions, primary beams are broken at metric units, and notes or rests that span metric units should be written to make the metric units easy to see (with ties or multiple rests).

Either of the choices shown do that - but it's a terrible test question, because either one could be right - it depends on whether the remaining eighth is placed on count 5 or count 6.

But the spacing is a clue. Most copyists will try to give beats about the same amount of space in a measure - that makes it easier on the eyes. The first line shows a purple box that's about an eighth note long and another that's about a quarter note long. Based on that, I'd assume the written eighth note falls on count 5... and that would make the second choice correct (because it preserves the roughly proportional spacing of the beats within the measure).

I think the expected answer is the second option. I derive this only from the note spacing.

As mentioned, these are not real options - they aren't two ways of writing the SAME rhythm, but two different rhythms. Both would be 'correct' if that's what the composer wanted.

The two examples are musically different. In the first case the single eighth note is on beat 6, in the second example it is on beat 5.
The question here is not about subdivision: both examples imply 3+2+2 (the second one could theoretically also be 4+3). The problem here is the spacing of the rests in example one. The quarter note rest has too little spacing and the eighth has too much. The player would be tempted to play the note an eighth too early. Example two is correct.
The alternative way of looking at this is that the question implies how much space each rest needs to take. Obviously the quarter note rest takes the larger space. Either way example two is correct.

Your options are musically different. The first one seems to divide the measure as 3+4 eighth notes; the second as 4+3 eighths. The choice cannot be made without context. Either is correct depending on the accentuation of the music.

4
I need help understanding a complex (or maybe compound) time signature
6
Using the correct enharmonic equivalent
2
What key could the progression Dmaj7-Amaj7-A6-Esus4-E be in?
3
I need help figuring out some of these note values for my sequencer
1
Dropping the 5th degree and counting a C♯Dom7
1
Does this transition have a name?
5
Triads with thirds that aren't major or minor?
1
Consecutive fourths in melodic motion
7
How to clearly notate tuplets, both “simple” and “complex,” in irregular meters
9
Why do these chords from the plastic bag scene in American Beauty work?