I'm reading a functional harmony textbook and found the notation in the following passage confusing:

(The quote feels off because the textbook is not in English. Please excuse the awkward translation.)

What is the meaning of those superscripts in IVm, IIIn and Vv? I first saw IVm and assumed that the m just stresses that it is a minor chord. However, this textbook never used that notation before when dealing with II and VI chords which, in major key, are minor chords.

Then I saw Vv and was thoroughly confused. I don't have any guesses as to what this superscript might stand for.

And what does he mean by upper tetrachord being harmonised with I IIIn IV Vv? I know that the upper tetrachord consists of degrees V, VI, VII and I, but still have trouble understanding the meaning of the whole sentence.

I will switch to using a circumflex ^ for scale degree instead of Roman numerals.

The upper tetrachord ascending is ^5 ^6 ^7 ^1, however Semlek apparently is not mentioning that a Phrygian cadence is a descending bass motion!

There are apparently differences in Roman numeral analysis between the United State (where I am) and Estonia. So I explain what I think these symbols mean.

Semlek gives the harmonization for that descending tetrachord as I IIIn IV Vv. (The n and v are supposed to be superscript, but I don't know how to do it in this post, sorry.) Apparently the n mean 'natural minor' or in practical terms no accidentals altering tone from the key signature. Based on normal minor key harmonic practice I guess that v mean use the raised leading tone with the dominant chord, because normally a Phrygian cadence would end on a dominant with a raised leading tone. Semlek doesn't use figure bass numbers on his Roman numerals, because he provides a bass line which allows us to understand the chord intervals and what inversions are used.

In the Roman numeral system I'm used to Semlek's harmony would be this... 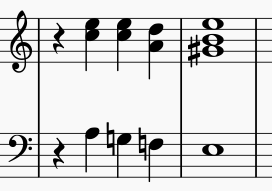 I'm used to the ^7 being harmonized with a v6 minor dominant, like this... 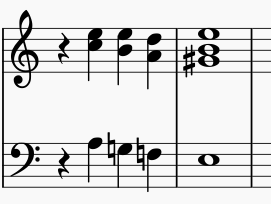 ...but that's only a stylistic detail.

I think the important things to understand are:

I'll take a guess based on your explanations. I think that your comment is correct about h,m,n in that as a chord superscript, the author means the chord build on the Roman Numeraled degree using the h or m or n scale. (Any noun may be verbed.)

Next guess with no evidence, Vv may be the II chord; the major chord (or seventh) build on scale degree 2 and acting as secondary dominant to the V chord. (Of course, I may be wrong.)

[Editorial: I don't like this notation very much as it's easier, in my opinion, to treat the minor mode as a single entity. Composers (classical anyway) do that. Separating the melodic, harmonic, and natural minor scales, to me, is over analyzing (except in jazz where it's a compositional technique) as the same piece often has all three scale patterns used together. /RANT MODE/=OFF]

Not the answer you're looking for? Browse other questions tagged chords notation chord-theory chord-progressions functional-harmony or ask your own question.

6
Finding out which scales contain a specific chord
2
Roman Numeral Analysis
1
Chord progression leading using B lydian (and others)
2
Determining roman numeral notation
5
Minor Key (and other key?) Roman Numeral Analysis
2
What roman numerals to use for chords borrowed from parallal minor?
3
Do Roman Numerals for a chord progressions change capitalization when played in a different key than the original?
1
Extended chord types for all major scale degrees
1
How to approach Iminor - VIImajor progression in a functional harmony way