I wrote two alternate fugue expositions for one subject does either follow good harmonic conventions?

The fugue subject comes from a placement test example for the Peabody Institute... 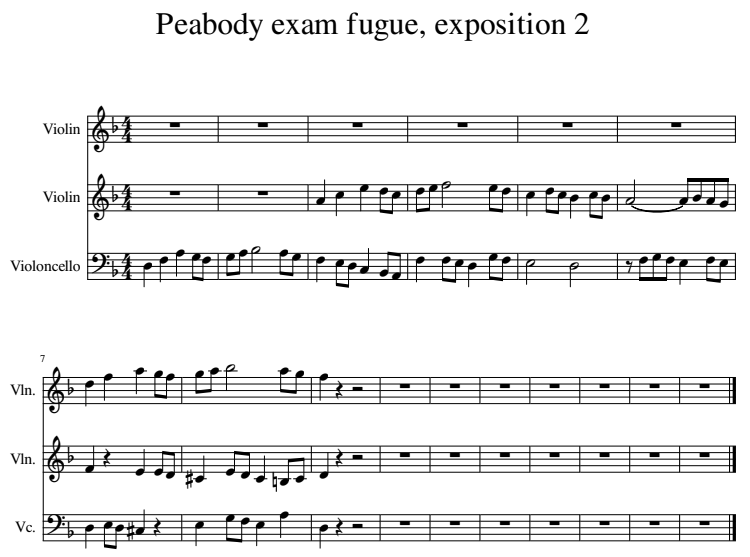 My question are about the interplay of harmony and counterpoint.

It seems to me the counterpoint of many fugue expositions weaves harmonically between the tonic and dominant or sub-dominant chords.

One might expect that when a subject (which is often an elaboration of tonic chord) is transposed up a fifth for the answer that the harmony of the answer should be the dominant chord. But this subject ends on the mediant scale degree, not part of the dominant. A quick check of some Bach fugues shows that in such cases the final mediant in the subject and initial dominant degree of the answer will form a I6 first inversion tonic chord. So in some cases the initial harmony of the answer may be tonic (ex. WTC I, no. 2), but other times the harmony could be dominant (ex. WTC I, no. 6), depending on the final tone of the subject. Are there occasions where the answer might start with another harmony, like the sub-dominant chord?

The second part of my question is about bar 2 of the subject/answer. In the subject bar 2 moves around the subdominant and that transposes to the tonic in the answer. However, in the answer there is a question of whether should be heard as returning to the tonic (D and F in D minor) or should it be heard as being of the dominant (D and F in A minor?)

I split the difference and wrote two alternate expositions.

In the first I treated the D and F as being of the dominant key and harmonized it with a G# to form a viio7 diminished seventh chord in A minor.

In the second I treated the D and F as being of the tonic key and harmonized it with a voice exchange F and D.

Are both options viable by 18th century fugue conventions?

Both sound OK to me, but I'm teaching myself so my confidence isn't too high.

BTW, if anyone recognizes the theme as one from a famous composer, please let me know. I've always wondered with there was a real finished product to study.

I'm making an edit after reading @guest's answer. For a composition question I figure one follow up edit to apply the advice is acceptable.

Turns out the main issue was about using a tonal versus real answer. After that I think the questions about harmony become clearer. I looked at the first two fugues from The Art of Fugue but I think better example is in WTC II, no. 14 the subject of that fugue is much closer to this Peabody subject that those in The Art of Fugue.

If I understand what Bach does in the four examples I looked at, the tonal answer (where to dominant is answered by the tonic at the fourth rather than the supertonic at the fifth) the initial harmony of the answer should be the tonic chord and then after that the harmony is on the minor dominant chord. So, in the case of a D minor fugue the initial answer starts with a D minor chord and then an A minor chord.

In both WTC II, no. 14 and the first two fugues of The Art of Fugue the following is a partial list of scale degree transformations:

The ↑ mean raised otherwise the tone is unaltered from the key signature.

The transformations in the answer are hard to describe briefly, because the tonal answer starts in the tonic key, but then changes to the minor dominant.

While the two The Art of Fugue examples use the raised leading tone in the subject it isn't used in the WTC example nor in the Peabody subject.

The other leading tone aspect to consider is the ^3 degree in the subject being answered by ^7 in the answer. The motions in the Bach examples are the reverse of the Peabody subject. Bach's motions are descending whereas the Peabody's are ascending. I think this make a critical difference deciding how to handle the answer.

In the Bach examples the answering tone occurs after the tonic where the harmony has shifted into the minor dominant. When the sequence and direction is reversed that answering tone precedes the tonic and occurs while the harmony is still tonic. In that context is seems right to raise the tone and treat it as a proper leading tone in the initial part of the answer. In other words, in the key of D minor a subject move of F to A should be tonally answered with C# to D all of which is in D minor, after that the answer will continue using C natural as the mediant in the minor dominant.

All of this is tedious to write in words, but I want to show what I think is Bach's consistent handling of tones in a tonal answer, in a minor key ...at least in these three examples.

When I tried to apply that I got this...

...the initial part of the answer is in the tonic D minor but eventually continues in the minor dominant A minor.

I suppose the Peabody Institute might hope that candidates realized that Bach has written an extended textbook on this exact situation, namely "Das Kunst der Fuge." Bach's fugue subject does have a C sharp to define a dominant harmony before ending on the mediant, but he often replaces it with a C natural to avoid the "obvious" cadential harmonic progression.

The rest of this answer is entirely about the first answer in the fugue, since two-part writing is inherently more ambiguous harmonically than three or more parts, and in that sense more difficult.

In both your versions, you chose to use a real answer. That has the consequence that you can't use C sharp as the leading note of D minor, and implies the harmony will tend to be in the Dorian mode instead of the D minor. There is nothing "wrong" with that decision, but it has consequences.

Without a clear leading note, you can easily end up with the audible tonal center ambiguously meandering between any pair of chords that happen to sound like a dominant and tonic - i.e. to F major or B flat major instead of D Dorian where you want it to be.

I think bar 3 of your first version suffers from that problem. Beats 2 3 and 4 sound like three C major chords which define a "tonic" by repetition, and that takes you off track relative to what a fugue is expected to be doing. Bar 4 recovers the situation by an unambiguous progression of E major - A minor, but the damage has been done before that.

The second version solves the problem by staying firmly in D Dorian mode for the answer, except that to my ears the B flat on the last beat of bar 3 sounds too much like a B flat major harmony which again is wandering away from a "dominant" of "A Aeolian." Try replacing beat 4 in the bass with a quarter note E or A and hear the difference. (To my ears E is harmonically OK but a bit insipid, but I don't know if the "Peabody placement marking scheme" would lose you marks for an unprepared 4th A-D.)

An alternative idea is to cut through all of this modal ambiguity and use a tonal answer with unambiguous A major - D minor harmony, as below. If the final F in the question was in parentheses, you are at liberty to replace it with anything you like in the answer, or subsequent entries of the subject.

Eighteenth-century fugal practice offers wide latitude as regards how strongly to tonicize the dominant in the answer. I would go with your gut instinct to move to A minor for this theme, as the melodic motion A-C-E sounds awkward in a purely D-minor context (because the note C has a downward tendency, I think).

In general, fugal conventions speak about the movement of voices and are silent about the choice of chords. It may happen that practically every answer (2nd voice entry) starts on the tonic or dominant chord, due to the conventions for first and last chords in subjects; but by the time the third or fourth voice enters, practically any chord containing the appropriate note can occur.

Your fugues could be improved by (1) strengthening the rhythmic independence of the voices (I'm looking especially at bar 3 of the first version) and (2) noticing that the first eighth note on beat 4 of both bars of the theme can be treated as a passing note.

5
Is 2 measures sufficient for a fugue subject?
1
Key modulation in a fugue, how to not lose sight of the tonic?
1
How to keep going in the fugue
5
How a chord is analyzed as a "chromatic mediant of the V"?
2
What makes a good fugue subject?
5
Why can't a fugue begin on the mediant?
3
Why the flat roman numerals in minor when they aren't needed?