Are extended chords assumed to have each extended interval below it and a 7th? [duplicate]

Ask Question
Asked 10 months ago
Active 10 months ago
Viewed 298 times
4
This question already has answers here:
How do you voice extended chords? (7 answers)
Closed 11 months ago.

Extended chords are created by a process of stacking thirds, where you continue to add notes from the scale, proceeding in intervals of a third (of whatever flavour) to the highest note. A 13th chord, therefore, is a seven-note chord that theoretically contains all notes of the diatonic scale.

In practice, however, most often used voicings will not contain all the notes that make up the chord. This can be done due to voice limitations (for example: four part vocal harmonies; only six strings on a guitar, etc.) or in order to clean up the sound - as we might expect, playing all notes of the major scale, say, at the same time can get a bit of a mess.

A typical voicing will include just the main tones - the ones needed to bring the character of the chord accross. For four-part voicings this will usually be the root, the third, the seventh and the upper extension (9th, 11th or 13th). The fifth is usually first in line for omission, but may be included if it is diminished, or if it is necessary for the inversion.

Why these particular tones? The root is fairly obvious, especially when the chord is not inverted. The upper extension, likewise (otherwise we wouldn't know we had an extended chord or what kind). The seventh is a bit less obvious, but it allows us to differentiate between an extended chord and an altered triad - C6 v. C13, for example. The third determines the mode of the chord, so we can tell the difference between, say, C9 and Cm9.

Also worth mentioning, as noted in the comments, is that in certain cases we may wish to omit/include different tones because of clashes, e.g. we would omit the third in a dominant 11th chord (which forms a minor 2nd/minor 9th interval with the 11th).

Other than that, any important alterations - like the aforementioned diminished 5th - should also be included, possibly at the cost of dropping a note we consider less important to the sound of the chord (for example, the root when playing an inversion).

You will notice that such simplified voicings may sometimes appear to spell out different chords than what we're supposedly aiming for. That's ok. One person's C6 (C,E,G,A) is another person's Am7 (A,C,E,G). When it comes to harmonies, context is everything.

Of couse, there's the primary triad to consider as well. 1, 3 and 5. So now, there could be a 5 note chord - easily playable on guitar - and obviously piano. As the P5 is heard to an extent in a harmonic of the root, that's the first to be let go. The root needs to be there - otherwise we don't really know what the chord will be called. However - if it's played on another instrument - bass/guitar, Sousaphone, trombone, for example, it needn't be in our cluster of notes.

If we played every note in a 13th chord, it'd be all the diatonics. Often a mess, with clashes certainly between 3rd and 11th, so it's prudent - and necessary on guitar - to leave some notes out. To an extent, it's down to the player, the instrument, and what voicings get used. But, as earlier, simplicity works.

All that, and, the 5s and 9s get altered a lot - especially in jazz. Could be &flat5 or ♯5, so those don't get left out, because they're important to the sound of the chord. Same fate awaits 9ths, so something like C7♭5♭9 will need all the notes,if possible, and on guitar could end up being played on the bottom 5 strings as C E B♭ D♭ and G♭ on top.

So, bottom line. Yes, they could all be played. No, they're not all usually played. Use ears (as ever!) and judicious voicing, and put whatever you feel is best. But at least use my opening gambit as a start point.

Sort of. We're all familiar with the 'pile of thirds' textbook examples. And a 13th MAY include the 3rd, 5th, 7th, 9th - but almost certainly not the 11th, unless it's sharpened.

But see this quote from Piston. Particularly note his comment that a 13th may often usefully be seen as a suspension (whether resolved or not). And, if tempted to describe his second example as 'quartal harmony' consider whether it's merely a quartal voicing of triadic harmony. 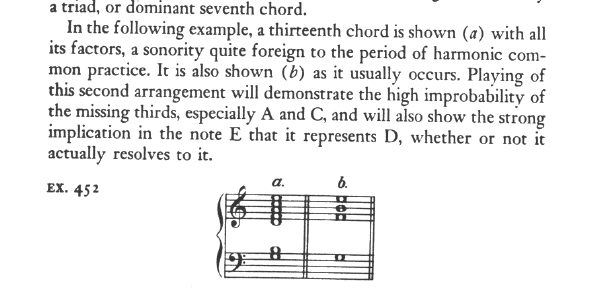 Not the answer you're looking for? Browse other questions tagged theory chords notation chord-theory or ask your own question.

15
How do you voice extended chords?

4
What are the notes in a 11th chord?
6
How do you properly define diminished 9th, 11th and 13th chords?
4
What is a chord consisting of Root, 9th and 11th called?
2
How are 13th chords with alterations “shorthand” written?
3
Is there an easier way to remember the notes in 11th and 13th chords?
15
How do you voice extended chords?
8
What are the diatonic extended chords of C major?
2
How To Build and Name 7th Chords
0
Do extended suspended chords higher than ninth (9sus*) exist?
10
13 Chord Voicing Without Root, 3rd or 5th