From time to time I see some unison / duplicate notes in piano sheets like this one: 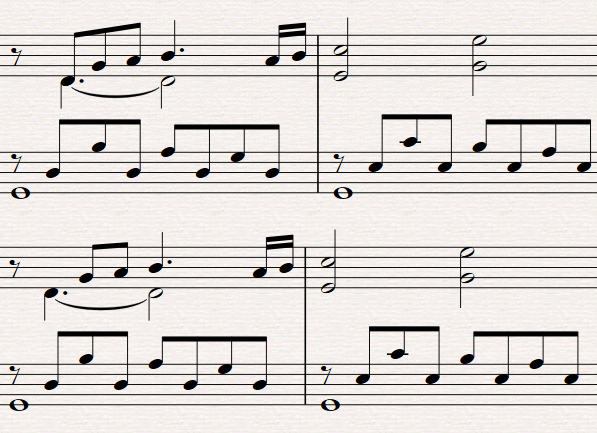 Is there a reason why you would write it like that, or would you actually play it any different?

I'm just confused why it's written like that, since you obviously can't hit the same note twice anyways.

It's written that way to make it clear there are two parts sharing that note, the melody (D G A ...) and the second part (D). Of course you only play the note once.

The second example is notated incorrectly, you need a quarter rest and an eighth rest above each other on the first beat. You would play it as if the melody started on the G.

Is there a reason why you would write it like that?

Yes, they are separate voices.

would you actually play it any different?

Yes. In this specific example it seems interchangeable, but you usually should see the role that specific note plays in each of the voices to which it belongs and play accordingly. When I say it should be played different I'm talking about interpretation, not that it should be played twice or anything like that.

As mentioned before, in this specific example it doesn't seem to be any great difference. It all depends on the melodic line the composer wants each of the voices to follow. If you take that note away from one of the voices, it may be incomplete.

You can see that these details are all very, very subtle. But if you ask, they're worth pointing out.

since you obviously can't hit the same note twice anyways.

Both the music examples are incorrect.

In the first, the two Ds on the top staff don't line up vertically with the D on the bottom staff. The player might wonder if the top staff D-G-A was intended to be a triplet, or something similar, starting after the left hand D.

In the second, there is nothing to say when the G on the top staff is supposed to be played (though in this example it's fairly obvious what was intended). There should be another 8th-note rest, to count the correct number of beats in the bar.

If the piece was a real song, originally with lyrics, obviously only one of those two options could be the correct one. In the other, the words wouldn't fit correctly to the notes.

50
How to know what notes will go together while improvising?
10
In piano music notation how are notes distributed between the staves?
8
Question about reading music sheets
35
What does this note - B# - mean?
1
Difference voices using same unison note
25
Why are double staff pieces of music not properly aligned for Middle C?
23
Is it true that cut time means "play twice as fast as written"?
1
Any recommentadions of DAWs that can interact with external piano?
5
why is guitar music written one octave higher?