How To Build and Name 7th Chords

I am trying to understand how to properly build and name 7th chords, the way of doing this is by adding a major/minor/diminished seventh to a triad, so having 4 chord qualities gives a total of 12 possible 7th chords, but there are exceptions as always.

-> Chords should be built upon stacking major and minor thirds <-

For a diminished triad you can't add a major seventh because the distance between the fifth which is a flattened fifth "b5" (diminished fifth) and a M7(major seventh) is an augmented third. (Gb to B)

For a major and minor triad you can't add a major seventh because the distance between the fifth which is a fifth "5" (fifth) and a d7(diminished seventh) is a diminished third. (G to Bbb) 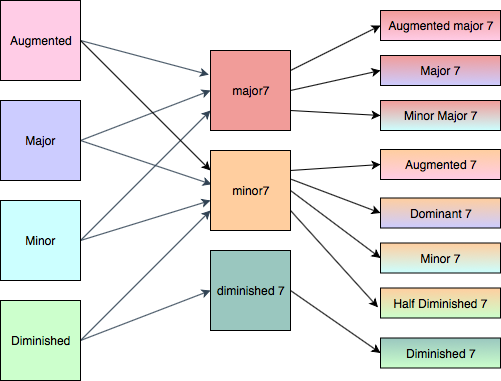 I have no idea if this is right or wrong, it is just the way I understand things, so do you think this is the proper way to build and name Seventh Chords?

I think the least confusing way is to start with diatonic seventh chords...

...note that those chromatic chords are commonly found in minor keys and the diminished seventh and diminished thirds found in those chords all involve the lowered sixth scale degree from the minor mode along with either the seventh or fourth scale degrees raised to create a leading tone.

Normally the augmented sixth chords are not categorized with seventh chords. I listed them here because technically they use four pitch classes and can be re-order as a series of thirds. In consideration of programmatically listing all possible combinations it seems worth noting that some seemingly odd combination result in standard chord types.

Finally there is the system of triad plus a seventh. In that system there are certain combinations what have names like the minor major seventh while others don't like a diminished triad plus a major seventh. While such chords may not have names they can be written with jazz symbols like @LaurencePayne showed Cm(maj7)(♭5) and of course you can write any of them in staff notation.

This is sort of a progressive approach. Working from diatonic to chromatic. Importantly not all the possible seventh chords have names. Basically the commonly used chords have names and rarely used ones don't.

If you are trying to write a computer program, you must decide what the output will be. Is it C:V7, G dominant seventh, or G7?

You have to decide what to do with the unusual cases. Return an error, use an unconventional name, or possibly enharmonically respell the chord to a commonly named chord.

Just adding an idea about how to name and programmatically handling enharmonics.

Maybe a good approach is to examine the input for non-diatonic intervals, then do the enharmonic re-spelling to attempt to find a diatonic (or otherwise commonly defined) seventh chord.

Then use a list of the diatonic intervals which are the major and minor seconds, thirds, sixths, and sevenths, and the perfect fourth, fifth, octave, and the diminished fifth and augmented fourth: m2 M2 m3 M3 P4 A4 d5 P5 m6 M6 m7 M7 P8.

I suppose you could work from either the d3 or the d7, but I'll use the d3.

The d3 isn't diatonic, so we en-harmonically re-spell. Pick one of the tones of the d3 and keep it, then re-spell the others. So there are two options:

...the chord can be re-spelled two ways to get a common minor seventh chord.

I used parenthesis to show a re-spelled tone.

...the chord can be re-spelled two ways to get a common half-diminished chord.

All four of the re-spellings are comprised of diatonic, major/minor thirds.

None of these spelling entirely diatonic, major/minor thirds, nor a full diminished seventh chord.

You could handle the tones as an object with letter and numeric properties like {"letter":"E","accidentals":0} and {"letter":"A","accidentals":-3} then calculations are easier: E to A is a P4 and 5 semi-tones, subtract 3, ddd4 a triple diminished fourth, and the final distance is 5 - 3 = 2 semi-tones. A _to_text()_ function could then output Abbb for musical display.

Actually you can add a major 7 to a dim triad, it will just sound "interesting". It looks like you are trying to write code to build chords. It also looks like you are not completely familiar with the musical jargon. Your general formula is correct, you stack thirds. If you apply this to the Maj scale you create 7 7th chords. Stacking 3rds amounts to skipping every other step in the scale.

Now, you can alter any of these to create more exotic chords. You are probably thinking that the only "3rds" there are are Maj and min, 4 half steps and 3 half steps respectively (relative to 12 tone equal temperament). The term 3rd can also refer to the relative letter name of the notes. One can diminish a minor third or 7th notes of the scale. For example a dim7 is a double flatted 7th (in the key of C this would be B double flat which is identical to A the sixth degree in 12TET). But if it is written Bbb it is still the seventh degree and not the sixth. Similarly one can do this with other notes of the scale and they retain their "title" relative to the key. So calling something a 3rd has as much to do with nomenclature as it does with frequency difference. In Just tuning there could be actual differences between a bb7th and a 6th but 12TET they are identical (enharmonic).

You can build the chord you mention starting from a Maj7, in C for example.

The frequency difference between the Gb and the B is a 4th but the proper nomenclature remains the same in that these notes are (1, b3, b5, 7). I am pretty sure there is no such thing in music notation as an augmented 3rd.

My point is that (1) there is more than definition of a 3rd diminishing a min 3rd essentially creates a second but it would still be called a third (Ex: Ebb is still a "third" relative to C), and (2) that there is more than one approach to building chords! The rubric "stack thirds" is a great way to start learning the mathematical relationships between different 7th chords in a given Key signature, and exotic extensions up to the 13th. But it is not a hard an fast rule that all chords must be constructed this way! Consider Pat Martino's way of looking at everything as an embellishment of the diminished chord, this is an amazingly efficient way of connecting chords forms on the guitar. And it would be easy to write a program that did things Pat's way. But that isn't the final word on the matter.

You've got a bit muddled in that diagram, I think!

Anyway, you can have a diminished triad with a major 7th if you like.

But you're not likely to find any chord with an augmented 7th. It would sound SO like an octave... :-)

I have made an overview over at Wikipedia: Seventh chord.

The names of the 7th chords are to be found in columns tetrad and alt tetrad. Their symbols vary by naming system used and are not included.

Not the answer you're looking for? Browse other questions tagged chords chord-theory sevenths or ask your own question.

4
Get Chord Name From a Given Set of Notes

4
How to name quarter tone chords
5
How do you figure out a chords name?
2
Roman Numeral Analysis
4
Chord construction using the minor scale
13
Why do we only build 7th chords on the supertonic and dominant of a major scale?
17
Why is a ♭5 chord not a "triad"?
4
Diminished 7th notation, match the key or key signature?
0
What is the relationship between the 5th and minor 7th in dominant chords?