How do you see it (Gm7/Bb?) and what functions would this chord have?

The four last chord in this hymn ( Hela världen fröjdes Herran) is a 6-2-5-1 progression. I have written that we have Dm-Gm/Bb-C-F. This is wrong. I now see it as Gm7/Bb. How do you see it and what functions would this chord have? 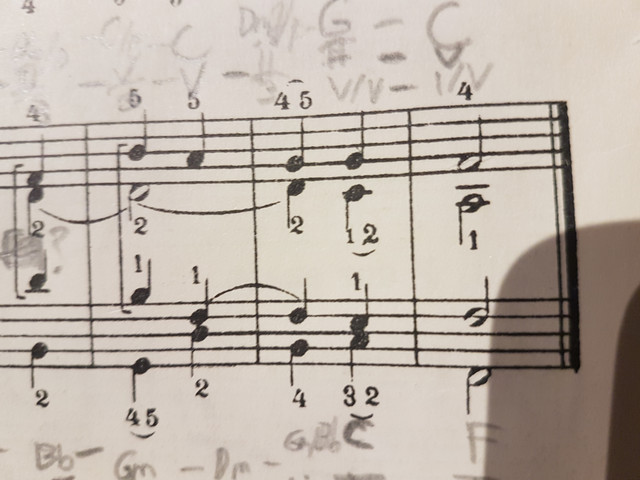 Can't see the Key signature but will assume a Bb is in it since you mention it in the question, and the line ends on F (which you are calling I). Also, safe bet that the bottom staff is Bass clef.

With B♭, F D and G, it could be Gm7/B♭, or B♭6. Either will suffice, although the cycle of fourths would make the last four chords Dm, Gm, C, F - a common enough sequence. Calling it Gm would make it a sort of v/V, which isn't a particularly strong pre-dominant. All this on the assumption the key sig. is one flat.

Assuming key signature of one flat.

The Gm7/Bb/ii6/5 is functionally a pre-dominant. Technically is a supertonic seventh chord, but it often is thought of a kind of sub-dominant, because if contains the complete sub-dominant (F:IV) chord Bb D F.

I have written that we have Dm-Gm/Bb-C-F. This is wrong. I now see it as Gm7/Bb.

At first I didn't really understand your question, but now I think I see.

The tie on the F3 between vi ii6/5 forms the seventh of the ii chord which is a dissonance that then resolves down by step to E3.

I think your question is should that F3 be regarded as the seventh of a proper seventh chord or passing motion between F3 and E3?

If it were a less common seventh chord, like IM7, I would probably expect the seventh to be better explained as a non-chord tone. But V7 and ii7 are common enough to stand as proper seventh chords.

13
How do you write successive, non-functional chord progressions?
4
What is a chord consisting of Root, 9th and 11th called?
5
Role of Dominant 7th chord in particular progressions
12
Harmonic analysis of the B section of “Have You Met Miss Jones”
2
Chord progression template
7
What chord would this most logically be thought as?
2
What makes a chord have predominant function?
7
False modulation for doxology in a modal key
5
Guidelines for writing a chord progression
5
How would this chord from “I'll See You In My Dreams” best be analyzed?