Why's a 12-tone row called "self-referential", but not perfect fifths or major thirds?

How, then, is an audience to follow a 12‑tone composition on first, second, or third listening? The answer: with a level of engagement, focus, and sympathy that must go far beyond the level of engagement, focus, and sympathy brought to tonally centric music. Whether this is good news or bad news depends on the individual listener, though for the general musical audience, it is bad news.

Certainly, the best 12‑tone works are among the best and most important music composed during the 20th century. But it is still difficult music, and much of that difficulty stems from the intrinsically self‑referential nature of its pitches.

How's pitch set "self-referential", but not M3 or P5, the building blocks of functional tonal harmony? Anyone with a B.Mus. will accept the two quotes beneath on the importance of the "perfect fifth".

The musical language itself became contextual, subject to the taste and expressive whims of the individual composer. For the first time since the 15th century, the perfect fifth—a musical interval spanning seven semitones—no longer governed the harmonic language of cutting‑edge Western concert music.

Schoenberg believed in melody more than anything else. As the first years of the 20th century progressed, he ceased to believe in the tonal harmonic system. By 1908, Schoenberg had come to the conclusion that functional harmony stifled and constrained melody by forcing it to adhere to what he believed were “artificial” constructs: chords built by stacking thirds and chord progressions based on harmonic motion by perfect fifths.

Greenberg uses "self-referential" on p. 49 too - see screenshot beneath. 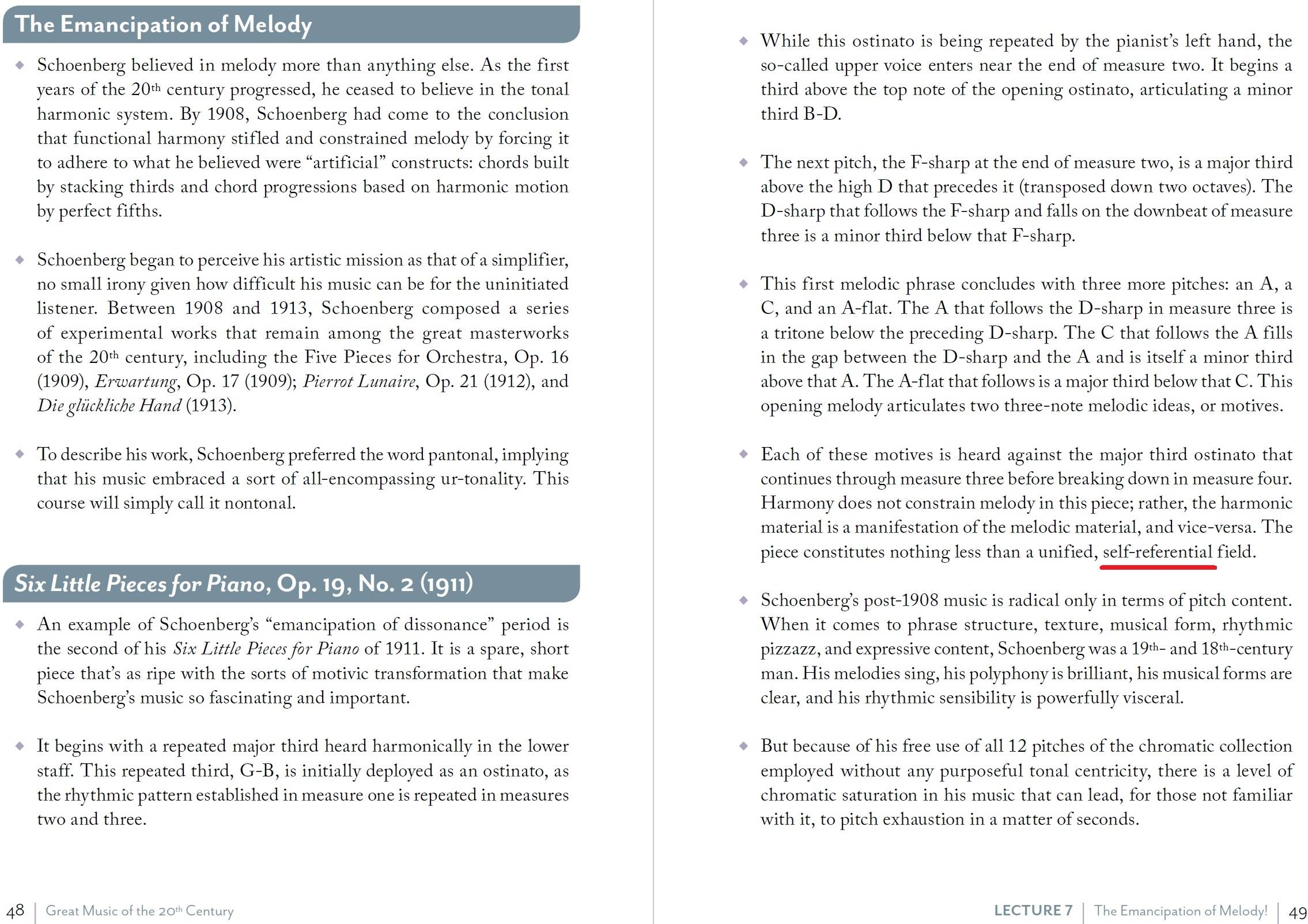 In the first quote, Greenberg seems to be talking about the individual pitches in a 12-tone piece rather than rows as a whole. My guess is that he is referring to the pitches lack of relation to a tonal center, but he could also be referencing each pitch's singular use in each 12-tone row.

As for your second quote, it seems to be about the connection between the harmonic and melodic elements of the piece.

I hope that help/is what you were asking for!

Edit: I'm not sure that Greenberg is avoiding calling intervals self-referential. Within the context of tonal music, saying that they were not self-referential would make more sense given the fact that they would be played with respect to the key center.

If my interpretation is correct, maybe a better way of saying what Greenberg meant would be - pitches lack external reference.

My interpretation of the first quote is that the self-referential nature of 12-tone music that Greenberg refers to is how a 12-tone row often is used in inversion, retrograde, and both at once in a given piece. In that respect, I'd believe that fugues (especially Baroque ones) are just as self-referential and are difficult to listen to in a rather similar way. I'd think that you need a similarly strong "level of engagement, focus, and sympathy" to catch every appearance of the subject, inversion of the subject, augmentation of the subject, the first countersubject, etc. of an intricate fugue. I'd also think that the fugue is similarly self-referential due to all the ways it uses its subject.

The root cause of the whole problem here seems be simply a belief that "argument from authority" and "argument by repetition" are valid.

Just because someone has a B.A. and a Ph.D. doesn't mean he is capable of coherent writing, or coherent thought. The number of times we have been told about his B.A and Ph.D in different questions here makes no difference to that.

You explicitly state your belief in argument from authority when you say "Anyone with a B.Mus. will accept" the second and third quotes.

The first quote starts from the straw man that "12 tone music" is not "tonally centric music". As a blatant counter example, listen to Berg's violin concerto. Here we have a strict 12-tone composition where after a few bars of introduction, we have a simple homophonic tonal chord progression with one chord per bar: Gm - D/F# - Am/E - E/G#.

Those four bars might be an exercise in in an elementary harmony textbook. The fact that they happen to be strictly derived from the tone row isn't a coincidence either. Berg knew exactly what he was doing!

In the second quote, good music in any genre has always been "subject to the taste and expressive whims of the individual composer" and always will be. "Ersatz-musik" constructed entirely from the so-called rules invented by theorists is not subject to "taste and expression", of course, and that is the chief reason why most of it is so unsatisfying to listen to.

In the third quote, again the author is setting up the straw man that all music in a certain historical period was based on some textbook definition of "functional harmony." At best, that is just defining "music" to mean whatever he wants it to mean for the purpose of scoring cheap debating points. At worst, it could mean he doesn't have a clue what he is talking about. It's hard to tell where on that spectrum he lies from a few selected quotes, but from the sum total of quotes that have been made in other questions, I don't feel inclined to read more of his writings to find out.

Biographical note: I don't have a B.Mus, so feel free to ignore all of the above as an ignorant rant if you truly believe that any opinion which can not be backed up by the authority of a piece of paper issued by an educational institution is worthless. But after half a century of making music, I don't have any more difficulties with "engagement, focus, and sympathy" listening to 12-tone music than I do listening to Mozart. On the other hand, I do have extreme difficulty making any sense at all of what "Robert Greenberg, B.A. in music (magna cum laude) from Princeton, Ph.D. in music composition from the University of California, Berkeley" is trying to communicate.

Not the answer you're looking for? Browse other questions tagged atonal or ask your own question.