Difference between Minor and Diminished Intervals

The minor is decreasing Major intervals (2nd, 3rd, 6th, 7th) by half step.

Diminishing means made the perfect or the major intervals smaller by half step as well.

So what is the difference? I am confused.

Here are captures of the two lessons. 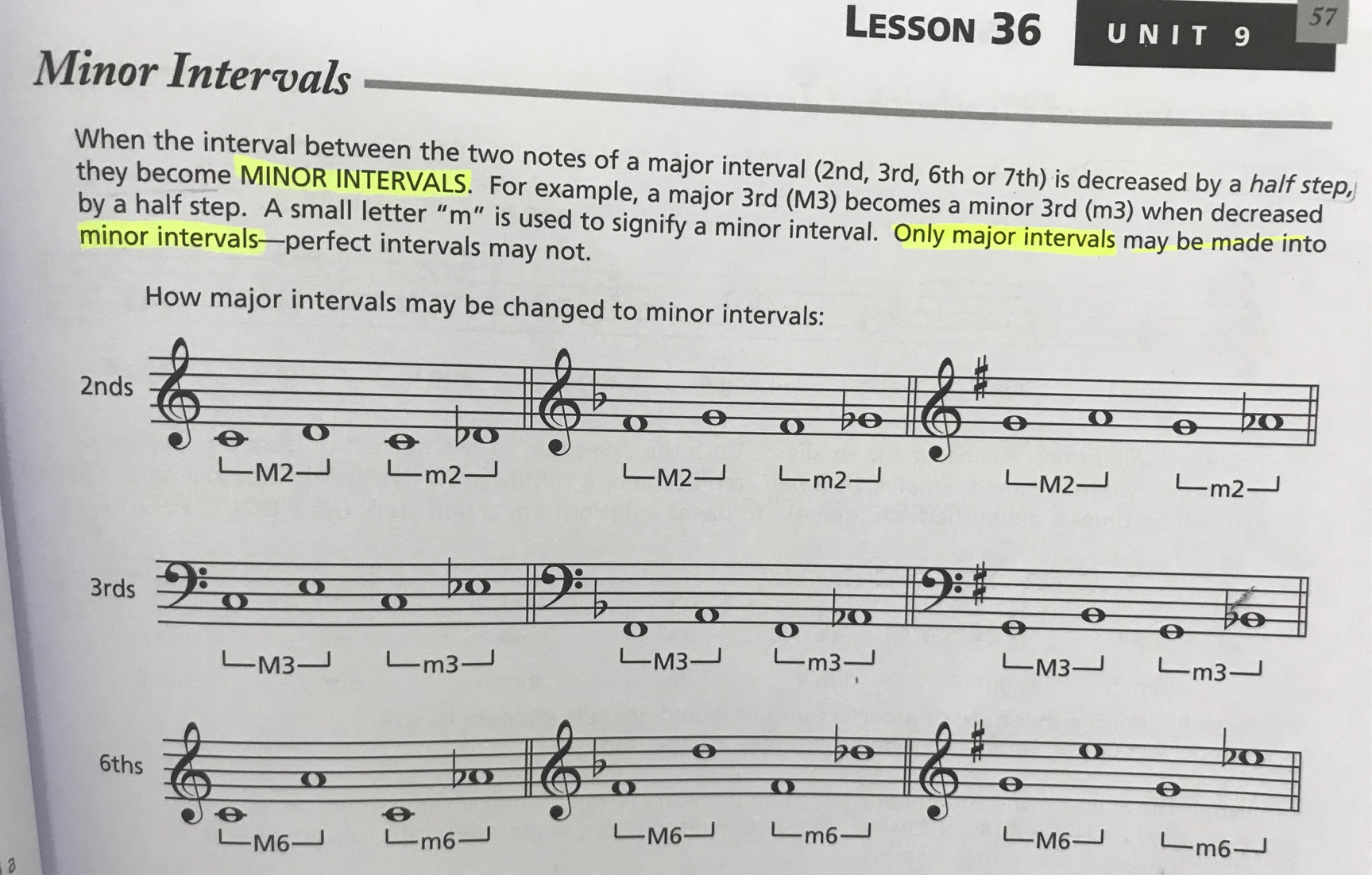 In contrast to Laurence Payne, I'm going to say that the preceding statement is not correct. The correct statement would be

The way I like to think of it is this:

You could look at the matter in a simple way:

The intervals 2nd, 3rd, 6th and 7th can be either small or big. Small ones are called minor, big ones major.

The perfect intervals can be either diminished or augmented. (Exception: the perfect unison can not be diminished.)

EDIT: I wrote the above answer yesterday, and today I decided that some elaboration could be useful as follows:

You can find all the minor intervals on the white keys on a piano without diminishing or decreasing anything.

I think a good way to get a handle on the terminology of intervals is to understand first the relation of internals to a tonic in the major/minor system. After that you can then apply the terminology to any interval. It's sort of a diatonic to chromatic approach.

Let's assume a tonic of C and a major scale.

The various degrees (tones) of the scale have significant relationships to the tonic.

The second, third, sixth, and seventh degrees are the modal degrees, they set the mode - whether the scale is major or minor. These various degrees and their intervals above the tonic are either major or minor. For example, in a major scale the intervals are major second, major third, major sixth, and major seventh. The intervals for a minor scale are more complicated, but we can skip that for now.

That's my way of explaining why some intervals are named perfect and other major/minor.

Diminished and augmented are modifiers added to the interval names when you shrink or enlarge them by a half step.

You can add double, triple, etc to diminished/augmented to make unusual intervals like a double diminished third. But that brings up enharmonic interval naming and you can skip that for now.

...Diminishing means make the perfect or the major intervals smaller by half step as well.

...The minor is decreasing Major intervals

Diminish and augment are verbs. They modify. (The exception is the tritone, B to F in C major, but let's skip that complication for now.)

The adjective/verb distinction is not perfect, but it might help you get a handle on the concepts. Minor and diminish don't really have the same meaning of making something smaller.

You don't minor a third. The minor quality is basically set by the key signature or accidentals that change mode/key.

You can diminish a minor third. For example in C minor you can change the minor third F Ab to a diminished third F# Ab (leading to a unison on G.)

So, let's say the situation is C major and you change the major third C E to a minor third C Eb, what is the modification to speak of? We aren't minoring the third, and we aren't diminishing the third. Probably it's best to speak of lowering the third to change it to minor. That describes the operation and the result is a shift to the minor mode.

"Diminishing means made the perfect or the major intervals smaller by half step..."

Now, Perfect intervals are different. Contract it (enough with the confusing word 'diminish'!) by a half step, it becomes 'diminished'. It doesn't go to 'minor' first.

OK that's what happens. 'Why?' you ask. And that's a harder question. I can tell you another characteristic of Perfect intervals - when you invert one - put the bottom note on top - it remains Perfect. Whereas inverting a major interval results in a minor one and vice versa. But that's just another characteristic of Perfect intervals, it doesn't really deal with the 'why' of them. Enjoy your research, if you're interested, though I suspect the topic's a bit above your current level of study. Maybe just stick to learning how intervals behave for now. Leave the 'why' for later.

All the answers shared above are good. I’ll just like to add a bit of help to make it easier for you to remember.

Think of all intervals within a major scale from the root. (Think C D E F G A B C) Categorize them into 2 groups:

(Actually I like to think of the second group as Major, but the correct term would be imperfect).

Hope it helps you visualize and remember better. :)

Of course, an augmented second is the same notes as a minor third, and can be written as such: A-B-C-D-E-F-Ab-An is the same notes as the A harmonic minor scale; F to Ab is a minor third. It isn't written this way because it's clearer to have each note of the scale on a separate letter ("scale degree") rather than two notes on the same scale degree differentiated with accidentals. So, the augmented and diminished intervals are usually used because they are a clearer alternative to some other way of writing the same notes.

Not the answer you're looking for? Browse other questions tagged theory piano technique sheet-music learning or ask your own question.

2
Multiply-diminished intervals from a major
3
Why Cminmaj7 is used and the purpose of minor and major are together?
0
Making part of a triad chord sharper, but is it counted as minor?
2
Confusion with 7th note of major and minor scales
4
Chord construction using the minor scale
4
Problem with 2nd degree in minor scale
1
7th and 6th-degree notes for a piece in a minor key