I found the following table of Intervals in the Harvard Dictionary of Music (re-created by me in MS Word): 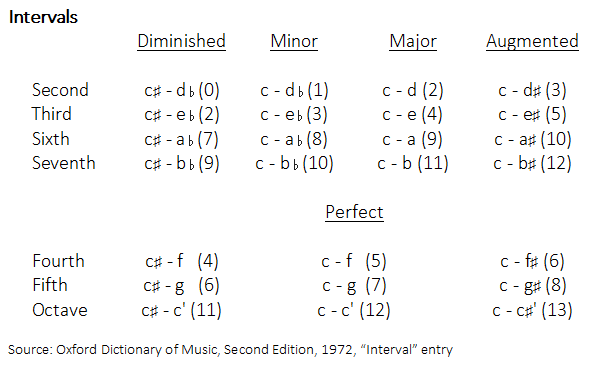 I am wondering why they use the base note of "c" for all the columns, except for the "Diminished" column. Is it simply to avoid the double-flat? I'd rather see the same base note for all columns. But my level of music theory knowledge is not very high, and sometimes things that initially make sense to me turn out to be wrong. Is there anything "wrong" with the following modification to the chart? 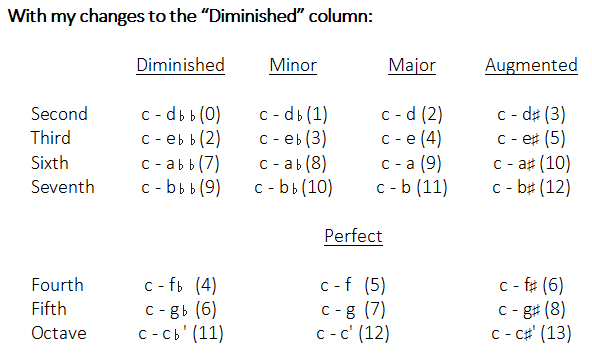 Would someone with a great deal of music theory knowledge find the original Oxford one "better" for some reason?

There’s nothing wrong with both what’s in the first table and what’s in your amended version.

The “quality” of a diminished interval simply suggest how many semitones there are between the two notes, ie one semitone smaller than that of a minor interval.

EDIT: The reason why the example given to you was so, was to illustrate the relationship of how the intervals are inflected from a diatonic interval between notes in the major scale.

You can also choose to illustrate the intervals in this manner:

Also, take note that even though C - Ebb is enharmonically equivalent (ie. sounds exactly the same as) to C - D, the intervals are treated differently because of how the notes are spelt:

Both the examples listed in the Oxford version and yours essentially try to illustrate the same thing: showing how intervals are inflected one semitone at a time. I personally don’t exactly have a preference for either, but my guess is the first one is more likely to be used in pedagogy since the double-flat and double-sharp are usually introduced much later in theory teaching.

The C# examples are more likely to occur "in the wild" -- that is, in actual compositions. That is probably why C# were used instead of C.