Rod Temperton was born in Cleethorpes, a seaside town on the east coast of the UK.

He also wrote the song Thriller for Michael Jackson.

Bearing these two facts in mind, it struck me there was a similarity between… 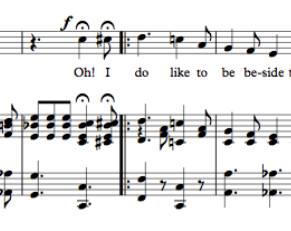 I known these quotes are in different keys, and neither of these is the definitive harmonization, but I think both tunes could be harmonized as a I chord with the tune descending from the 6th to the 5th degree of the scale. Coincidence?

All the two examples have in common is a melody moving from the 6th to 5th degree. In 'Thriller' they are harmonised with two different chords, vi and I. In 'Seaside' they are both harmonised by I.

You have a great future as a music industry lawyer!

5
What do the numerator and denominator of a chord name in roman numerals mean?
11
What is the difference between grouping overlaps and elisions?
2
Mists of Pandaria ambiguous and aggressive tonality
2
How to find efficiently and systematically audiovisual analysis of pieces?
3
Why is this segment of “E.T. The Extra-Terrestrial” in B minor and not D major?
2
Where is the fragmentation?
15
What makes a piece sound like Beethoven?
7
What is the rhythm of this Herbie Hancock song, and why is it so weird?
2
Are there objective, unambiguous ways that the level of similarity of two bits of music can be measured?
2
the meaning of figure-work in the musical field perhaps with examples