I don't seem to find an extensive resource on how to name out of scale chords in Roman numeral analysis.

E.g., let's look at this piece from "All imperfect things" of Michael Nyman:

I'm stuck on M5 and M7. In my very inexperienced mind there's tons of possibilities here, and maybe I started all wrong to begin with.

I'm assuming this is in A minor, even though the key signature's G/Em, and I think M5 & M7 are borrowed from the relative major: i.e., that would make them the IV from C major.

I have no idea however how to notate that. And have tried to look that up, but only ever see the solution to a specific question. I haven't been able to find a clear explanation on how to notate borrowed chords in general.

Leaving aside the specific piece that prompted the question, the core of what's being asked is:

How does RNA label out-of-key chords?

There are three primary ways

1. Just add a sharp or flat before the Roman numeral

Suppose we're in A minor and encounter a Bb major chord. This can be labeled bII ("flat two"). Similarly, in A major, and F major chord could be labeled bVI.

However, there is a significant caveat.

The core purpose of RNA is to describe the function of a chord. Within RNA, bII and bVI have understood meanings in terms of how those chords are expected to behave, or the contexts in which they appear. However, in terms of chord function, there's no such thing in RNA as a #III chord.

In literal terms, of course, a C# major chord occurring in the context of A minor would be #III. So if your purpose is to use Roman numerals as a generic substitute for chord symbols, then calling it #III is fine. It gets the point across. However, in functional terms, #III is meaningless and is not part of "true" RNA.

A secondary chord is a chord that functions in a key other than the primary one of the piece. OP proposes that a piece is in A minor, but that an F major chord could be the IV chord in the key of C major. That is to say, the F major chord functions in a key (C major) other than the primary one (A minor). Thus the F chord would be a "secondary" chord.

RNA employs a slash notation to show that a Roman numeral should be interpreted relative to another key. For example, suppose a piece in A minor modulates to C major. C major is considered the "key of III"; that is, the key based on the third scale degree of A minor. Thus, an F major chord would be IV/III: the IV chord relative to the "key of III", C major.

Let's return fully now to the piece that prompted the question. Taking at face value the OP suggestion that the piece is in A minor, then the F major chord in measure 5 and 7 is actually in key. It's the VI chord.

However, let's follow the train of thought that it is actually operating as the IV chord of C major (i.e., the "key of III"). In that case, the RNA label would be IV/III ("four of three"), meaning "the four chord relative to the 'key of III'", as explained above.

Taking this idea a step further, consider the preceding chord in measure 4. Again allowing we're in A minor, labeling this G major chord as VII makes perfect sense. But let's consider that its function is actually to lead us to the F chord in measure 5. In that case, we'd want its label to reflect its use relative to that F chord. Measure 4 would therefore be labeled II/VI ("two of six"), meaning "the two chord relative to the 'key of VI'".

There is extensive discussion of this type of RNA notation in What is a secondary dominant chord? Although that Q&A focuses on the use of V chords, it should give a thorough understanding of the concept of "secondary chords", as these "slash chords" are known. And as shown here, the concept isn't limited only to V chords.

3. Indicate a key change and use RNA in that key

When there are a significant enough number of chords functioning in a different key — an extended modulation, for example — the new key is indicated directly and then the RNA proceeds in that key. This removes the clutter of slashes on every single chord. 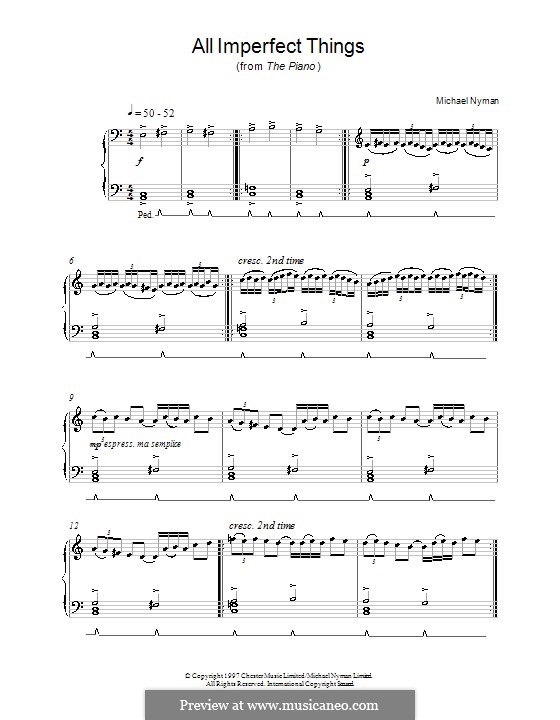 „After a fixed process, Nyman chooses [...] very short verbatim quotes from the classic template and subjects them to a minimalist repetition. The tonal orientation is retained, but the harmonic progression is changed. Finally, whole bars of the source material are missing and the harmonic stages are abruptly juxtaposed, instead of logically following a cadence. " Michael Nymans Musik als Musikgeschichte von Volker Straebel, 1999

The result is music that has both charmed initiates and uneducated listeners of the same musical appeal because it plays intelligently with tradition but on the other hand never becomes atonal. https://de.wikipedia.org/wiki/Michael_Nyman

(The German wiki commentary is more extended than the English ...)

Edit: Well, if I had to analyze this piece with RN I would first define whether it is in a minor, G major or e minor:

G major => bVII 46 (the flat sign notated below the RN

and then the other RN should be adjusted to the key and also the half note changes in the r.h. could be determined. But as I said: it doesn‘t make sense!

For a start, if it IS considered to be in A minor, V would be E major. The E minor chord in bar 2 could be labelled v. You could call the F chord ♭VI. Roman numeral analysis covers chromatic chords. No need to 'borrow' unless a chromatic chord DOES lead into a new tonality, and this one doesn't.

But this isn't functional harmony. Functional analysis doesn't tell us anything much useful about it.

Not the answer you're looking for? Browse other questions tagged theory notation key analysis roman-numerals or ask your own question.

23
What is a secondary dominant chord?
3
Use of Roman numeral notation when a new key is introduced within original key