Is this really better analyzed in G minor than in Bb? 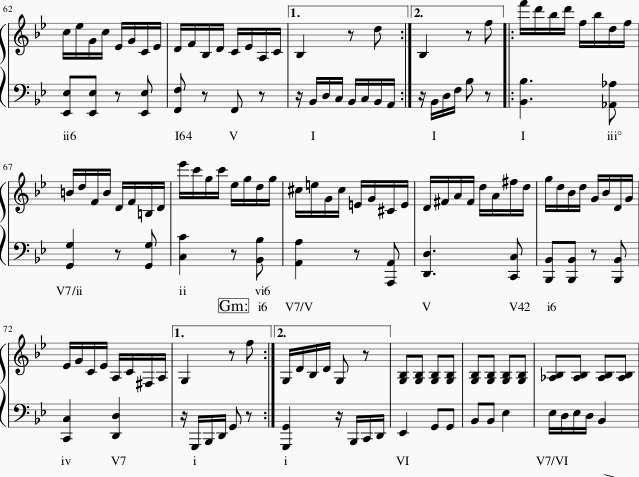 As you can see, my opinion as far as analysis is concerned has 2 harmonic areas, Bb and Gm. Now here is the expert's opinion about these same measures: 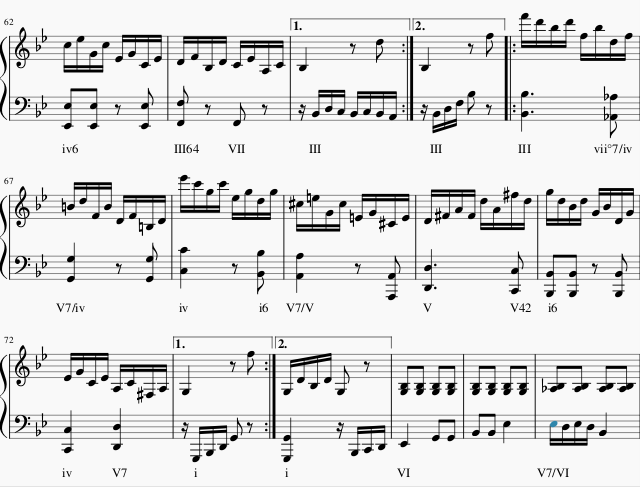 As you can see, the so called expert thinks that the entire passage is in Gm. It makes for there being fewer modulations, but what previously made total sense is nonsense now. Like the vi ii V I, one of the most common chord progressions becoming i iv VII III, which is just total nonsense, even in a minor key. Also, the resolution to III diminishes the sense that you are in a minor tonality to begin with.

My way of analysing it avoids this problem by having the section from bars 57-68 be in Bb until it reaches the last eighth note of bar 68, at which point it pivots to Gm and it only makes sense in Gm.

Here is my reasoning behind analysing bars 57-68 in Bb instead of Gm:

Yes, you would expect to hear Bb major chords in a G minor piece. But in a G minor piece, if there is a resolution to III, that typically is a modulation to Bb and thus is truly a resolution to I, not III. VI and VII on the other hand can be resolved to without a sense of modulation in a minor key, just like how in a major key, you can resolve to vi without actually modulating to vi. So it just makes more sense to me for bars 57-68 to be in Bb, regardless of whether that means there is a modulation later on or not. And besides, Rondo a Capriccio has frequent modulations anyway.

Also, typically, in a minor key, III does not get inverted whatsoever. It usually is in root position. Here, if the whole passage is analyzed as being in Gm, you get all 3 inversions. There are only 2 chords(3 if you extend it to seventh chords) that typically get all the inversions. Those being I and V in major and i and V in minor(and also vii°7 if you extend it to seventh chords). Other chords like IV or vi typically only get 2 of the 3 inversions and a few others like III typically aren't inverted at all. So to see all 3 inversions of what is supposedly III in Gm makes me doubt that it is in Gm at all and instead think that it is in Bb.

Using the word "key" is too definite. The music progresses through lots of different tonal centers but most of them don't last long enough to be worth calling "keys".

Both of you are wrong about the whole passage, but the "expert" is more wrong.

The point which you both missed is the sequence in bars 66-70 with a V-I cadences in Bb major, C minor, and D major - which of course is the dominant of G, so we arrive back home.

Equally, trying to pretend that a G minor chord after a full cadence in G major is in any tonal center other than G is just ignoring what the music sounds like.

So, somewhere between bars 57 and 65 (and don't forget the passage is repeated) the tonal center shifts from G minor to B flat major. Exactly where does that happen? Frankly, who cares! If you like, you can claim you are both right, and the first time through the repeat is in G minor, but the second time in is B flat major. There is no rule that music has to have a unique, unambiguous analysis according to the "rules" in some textbook, and most good music is ambiguous to greater or lesser degree. The chord in "bar 57 following bar 56" doesn't necessarily have the same harmonic function as the chord in "bar 57 following bar 64" even though the notes are the same.

Incidentally, claiming that bar 75 is anything except a fresh start in Eb major is just as nonsensical as the debate in the OP. Once again, stop looking at the score, and start listening!

I suggest that it's ridiculous to analyse 57 as anything but i in G minor, but equally ridiculous to analyse the cadence at 64/65 as anything other than V-I in B♭ major. So have both. G minor at 57 with an immediate modulation to B♭ major. After that, at 64, it's a bit more up for grabs. We know we're in G minor by bar 72. What tonal centre do you prefer at bar 65? A new one every couple of bars or not? Perhaps Roman numerals aren't all that useful in this section!

Look at the whole piece. Up to bar 57 we have been firmly in G major, key signature one sharp, and apart from an occasional 'V of V' completely diatonic. The change at 57 is clearly to i of G minor (not vi of B♭ major), and your 'expert' has preferred to treat the entire section up to the return of G major as based on that key. I see his point, from a structural viewpoint, though I think it results, when analysing the detail, in Roman numbers that aren't always very helpful.

Look at how the excerpt falls into sections/phrases. Harmony often isn’t static, each section in a single key: it moves, on various timescales, through phrases and sections of a piece.

The first 8 bars of the excerpt, bars 57–64 (plus repeat), are most naturally read as starting in g minor, and ending in Bb major. Then the next 8 bars, 66–75, go from Bb major back to g minor. So when seen together as a 16-bar section (or 32-bar including repeats), it goes (g minor) –> (Bb major) –> (g minor). The g minor is the key this section starts from and returns to; so it’s the key that makes the most impression on the ear, and this is why it would generally be analysed as the main key of the section, although it’s certainly true that in the middle, the section moves to a (shorter-timescale) tonal centre of Bb major.

Going back to the first phrase now, to see why it would usually be analysed as “starting in g minor, and ending in Bb major”, rather than as “in Bb major, starting on the 6th”: When you first hear the g minor beginning, there’s been nothing before it to suggest Bb major; it and the next bar clearly set up the idea of g minor. Unless something later gives a strong reason to view things otherwise, the natural way to analyse this is that the phrase starts in g minor. At this point, the listener has no reason to hear it as anything else. Now, as you say, there is some reason to consider the alternative view, since the phrase immediately moves towards a clear cadence in Bb major. However, it doesn’t stay there — as quickly as it has moved to Bb major, it then moves back in the next phrase to an equally clear cadence in g minor. So the Bb major isn’t established for any longer than the g minor was; so it doesn’t really give a compelling reason to reanalyse the start of the phrase in hindsight.

An example of the contrary, where the start of a phrase really does deserve reanalysis based on what comes after it, would be the Rondo of Beethoven’s 4th Piano Concerto in G. The first couple of bars seem to establish C major; but the rest of the theme, and the continuation, establish G major more strongly and for longer. With so much surrounding context in G, it becomes natural to hear the opening bars as really being the subdominant of G, rather than establishing C as a tonic as they seem to on first hearing. However, in your excerpt, there isn’t anything like so much surrounding context to establish Bb major as a more significant tonal centre than the initial g minor.

4
Chromatic 7th chords going upwards in Beethoven
1
Can an augmented sixth lead straight to tonic?
4
Rootless chords in Beethoven sonata?
5
How should I analyze this passage? As vii°7, V7, or both?
4
Diminished seventh spelling but functioning as an Augmented Sixth?
2
Is this a Neapolitan 6?
3
Why the flat roman numerals in minor when they aren't needed?
7
When does a jazz tune actually modulate?
3
Harmonic Analysis of C. M. von Weber Clarinet Concerto No.1
1
When does this extract change key? (Roman Numeral Analysis of Greene: 'Ode on St Cecilia's Day')