Can an augmented sixth lead straight to tonic?

So I am almost finished with my harmonic analysis of Rondo a Capriccio. But I came across a mysterious chord. I'm trying to figure it out. Here is the chord: 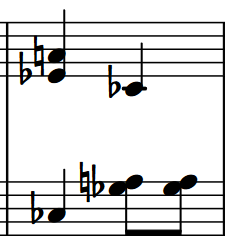 Here are the German augmented sixths on each possible root note:

And here are the French augmented sixths on each possible root note:

Looks like it is a Cb German Augmented Sixth. The chord before it is E major and the chord afterwards is Eb major which then gets tonicized for a few bars. The augmented sixth in the chord resolves to Bb in octaves. The Eb stays put as a common tone. The Gb moves up to G. But this means the augmented sixth resolves straight to tonic instead of to the expected Bb major chord. Here are the next few bars in the piece after the augmented sixth: 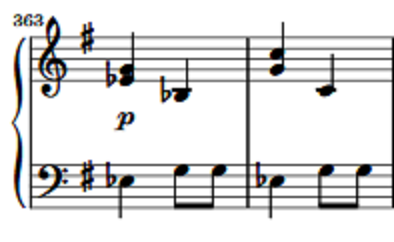 As you can see here, the resolution chord of Eb is tonicized for a few bars after the augmented sixth.

The other answers are correct, this augmented sixth chord is going to the V, it’s just doing so via a cadential 6/4 chord. Although the notes are the notes of a tonic chord, they actually function as suspensions (and such) over the dominant bass before resolving and forming a V chord (V7 in this case). This is very common behavior after a German +6 because going straight to V invariably creates parallel fifths (or other unstylistic voice leading).

HOWEVER, the answer to your question is “yes.” Although augmented sixth chords are usually used to dramatically move to the dominant, they can be used to go elsewhere, and tonic is probably the second most popular destination. However, this will often involve different notes and won’t be a traditional “nationality” of augmented sixth. For example, in Eb the bass might be Fb and the the upper note of the augmented sixth interval will be D. Other notes may be added to mimic the traditional +6 or might not.

I also know of at least one example where a traditional It+6 goes directly to the tonic chord. It’s in the transition to the third stanza of “Ihr Bild” by Schubert. I’m sure there are plenty of others. As you pointed out, the primary resolution of the augmented sixth interval itself still happens in such a case, so it’s not ridiculous at all.

I can't see the images (on this IP) but generally the German Sixth resolves to either a dominant seventh on the dominant (often yielding parallels) or the a 6-4 on the tonic. The point is that (in this case) the German Sixth acts as a sub-dominant resolving to the dominant through a tonic six-four. This is an idiomatic use of a six-four chord (called the "cadential six-four") and sometimes is given the symbol V64-53 instead of I64-V. (Either is OK, labels are arbitrary though useful.) In this case the I64 moves to a root position V by dropping the 6 and 4 to a 5 an 3 over the fifth degree. Rather that saying the G6 moves to the tonic, I'd say the G6 moves through the tonic64 to the dominant.

M. 361-363 is overall a V-I motion with an extended dominant function. The I 6/4 chord in m. 361 acts a precursor to the dominant, essentially like a suspension over the dominant root. It really cannot be said that the augmented 6th is going to a I chord when the I chord is in 2nd inversion. The I 6/4 chord is acting like a dominant here. What masterful movement to that chord by semi-tone in the bass and soprano, keeping the Eb as a common tone.

Not the answer you're looking for? Browse other questions tagged beethoven functional-harmony or ask your own question.

3
How to overcome emotional tension with this Beethoven rondo
4
Chromatic 7th chords going upwards in Beethoven
6
Diminished chord constructed over the tonic degree?
7
Is this really better analyzed in G minor than in Bb?
4
Rootless chords in Beethoven sonata?
1
Augmented triad in Pathetique Sonata? How does it function?
1
Function of Minor sixth chords
4
Diminished seventh spelling but functioning as an Augmented Sixth?
4
Is this cadence an example of the German theory that the mediant chord can have tonic function?