Compelling Use of Non-diatonic Chords in Rolling Stones

"Brown Sugar" by The Rolling Stones is in C major, but makes forays into E-flat major (based on the preview of the sheet music at least!). My guess is that the inclusion of these chords can be explained by blue notes present in the pentatonic scale--the flat third and flat seventh scale degrees.

I understand the expressive purpose of these notes in a riff or solo, but here The Stones include harmonies built off these notes, which sees the song departing from it's original key. What I find curious is the effectiveness of this design. It feels loose and playful, yet not lost: the E-flat major chord in bar 9 leads convincingly back to C-major as does the B-flat major chord in bar 11.

I understand that the flat-third and flat-seventh chords are common-place in early rock and roll, but I am wondering if you can explain in terms of harmony, using this song as an example, why these chords function the way they do, serving almost as a dominant in the sense that they lead satisfyingly back to the tonic despite belonging to a different key. 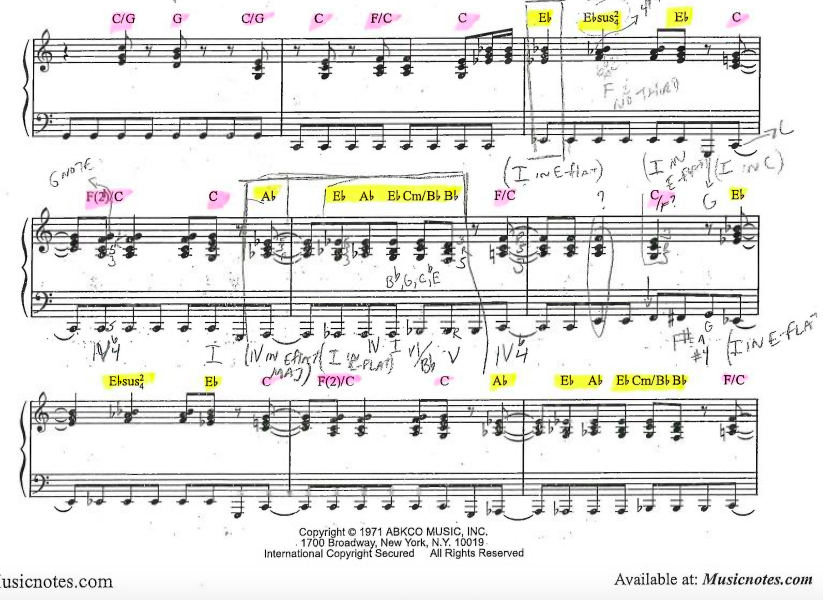 Don't try to relate E♭ major to C major in a functional way. Just accept that a sudden shift of tonal centre to just about ANYWHERE is an acceptable and common device in today's music. And don't try to explain the return to C from Eb as a dominant-tonic. It's just a return to where we started. That naturally will be 'satisfing'. There is a world of harmony where everything can be analysed as a tonic, dominant or subdominant. We aren't in that world here.

This particular shift of a minor 3rd is so frequently used that it gets a label - "Chromatic Mediant Relationship". In fact there are four 'chromatic mediants. If we start in C major they're E major, A major, E♭ major, and A♭ major. They're all good to jump into, and from a diatonic C major section one is as good as another. Of course, if you intended to jump into (e.g.) E♭ major you COULD 'pave the way' by introducing the odd Fm chord. Some would see this as desirable preperation, some would feel it spoils the surprise!

You can also get to absolutely any tonality, with or without shared notes or any other obvious connection, by simply jumping into a ii - V - I in the new key. Jazz tunes do this all the time.

What this really comes down to is that in modern tonal writing it's OK to just jump just about anywhere. And, if you insist, I'll find a 'theory' excuse for the place you choose, or even pin a label on it. But please don't try to make me force it into 'circle of 5ths' thinking.

In music, we usually reserve the term "dominant" for the chord built on the fifth of the key, but there are a few exceptions to that, tritone substitutions being one of them. However, I've never heard an example where I felt that modally mixed/chromatic mediant chords were functioning as dominants, except for secondary dominants, which obviously doesn't apply to these chords.

It's possible you have a looser interpretation of "dominant" than we do; I think few here would argue that the chords do not go back to the tonic smoothly, but dominant is a certain flavor of resolution that I don't see myself or others applying to, say, E♭ resolving to C major. That doesn't mean the chords are wrong or useless, though. It sounds good, so the chords did their job, right? It just means that theorists don't usually call that dominant resolution.

Think of the piece as being in C minor for a second, rather than C major. E flat major just fits right in as a diatonic chord, as do A flat major and B flat major.

"But wait, it's clearly not in C minor!". Well, in general, once we become accustomed to 'blue' thirds and sevenths, some of the distinction between major and minor tonality arguably falls away. Rather like the way conventional minor tonality 'allows' us to use raised or natural sixths and sevenths, 'bluesy' tonality allows the use of a major or minor third (or somewhere in between). Using a major chord on the tonic in otherwise minor tonality isn't specific to blues of course - e.g. we have the 'Picardy third'.