I’m a self-taught amateur composer, and whilst the standard dynamics of ppp to fff go a long way, over time I’ve wanted to use some additional instructions to indicate incremental dynamics between existing ones. For instance, if a Player 1 is playing p and Player 2 is playing pp, what would I write if I want Player 3 to play at a loudness level between the other two? (This is assuming all play the same instrument – I don’t wish to compare triangles to timpanis or anything.)

Presently this is how I use qualifiers with dynamics:

To be clear, I mean for these to be non-relative instructions, so that a player would know that più p (or whatever the best way to write it) specifically means to play at a loudness between p and pp and not just “more softly relative to whatever dynamic you’re playing presently”. In other words, if a musician is playing f and they see più p, I don’t want them to play “more softly” as mf, but rather to drop down to something between p and pp. (I know this isn’t the most realistic or practical example, but it illustrates the idea.)

That said, if più and meno don’t work in the way I describe above, would using poco (“a little/slightly”) and molto (“much/very”) work better for this purpose?

EDIT: Here’s a rough & quick illustration of the sort of scenario where this would apply: 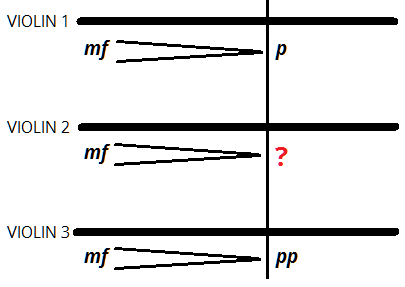 So Vln 1 has a dim. hairpin down to p and Vln 3 goes down to pp. What would I write in the space of the red question mark to indicate I want Vln 2 to start playing at a dynamic between the other two at that spot?

You are probably overthinking this.

First, dynamics are not absolute, they depend on the instrument. If a score instructs a tuba to play middle C "pp" and a flute to play the same note "mf," the flute player might as well not bother, except for the theatrical effect of the audience watching him/her doing something.

Second, the dynamic range of different instruments varies from very large to very small. The difference between "ppp" and "fff" on an oboe, for example, is virtually nothing in terms of decibels, though the timbre of the sound will change. Some instruments can not play extreme dynamics at the top and bottom of their pitch range - often (but not always) low notes can not be played fff and high note can not be played ppp.

I don't really know any way to learn all this detail except by practical experience with live performers. What you get from computer software playback by default is almost always misleading. Reading books on orchestration is like trying to learn a language by reading a dictionary. Reading scores and listening to good recordings is probably the second best way to learn - especially if you enter the music into a notation program and compare the playback you get with the live version.

For the specifics in your question:

"Più f" and "più p" are standard markings for "get a bit louder/softer," so long as you realize that the size of "a bit" depends entirely on the performer.

"Meno f" is fine for "get a bit softer" if the dynamic level is already f (or higher) but "Meno p" is a sort of double negative. If you were going to ask somebody to "walk a bit less slowly", why not just asked them to "walk a bit faster" instead?

If you still really want to write an "absolute" dynamic indication between say pp and p, you could invent your own, like "mpp," and explain it in a note at the start of the score. A dynamic scale like ppp mppp pp mpp p mp mf f mff ff mfff fff would make notational sense from a prescriptive point of view, but practical music making experience over the past few hundred years has not found much use for it!

Some people have invented a dynamic scale like ppp ppp+ pp- pp pp+ p- p p+ etc for marking up computer playback, but there is far too much detail there for most human players to deal with.

Composers have written "poco f" but to be honest it means whatever the performer thinks it means - so if you are trying to be prescriptive, avoid it. It's about as self-explanatory as "being a bit pregnant".

I have never seen "m" on its own as a dynamic, and if I did I would assume it was a typo for either mf or mp.

It is generally better to use three dynamics p, pp and ppp or mp, p and pp rather than only using the two p and pp and then trying to put something in between p and pp.

Assume you see two scores. One score has these four dynamics: p, mf, f and ff. The other score has these four: pp, p, mf and f. Then you know that p is the softest dynamic in the first score while pp is the softest in the second one. So you would differentiate accordingly. This means that p in the first score could very well be similar to pp in the second score. So the dynamics are not just relative to what was written earlier in the score but also relative to the overall range of dynamics in that piece of music. It can also be relative to the overall dynamic level, like if a symphonic score has f in all parts it can mean that the overall dynamic is f but the conductor works with the balance, maybe asking the trombones to play softer or whatever. Some composers write a differentitated dynsmics in all parts, but you really need to know the instruments very well in order to do that; the conductor might need to work on the balance anyway. Other composers write the same dynamic in all parts and let it be up to the conductor to balance it.

@guest said in his answer that poco f means whatever the performer thinks it means. So the subject of interpretation coms up; poco f literally means "a little forte" or "to a small degree forte". The term is not that much in use but I have seen it in scores where one instrument has a melodic line with f and the other instrument playing an accompaniment has poco f kind of indicating that the overall dynamic is f but the melodic line should be emphasized. But often you might as well type just f in both parts and let it be up to the musicians or the conductor to work on making that differantiation. Well, it does depend on how easy it is to determine what should be emphasized of course. If it is not that easy you might somehow need to indicate what should be emphasized. Sometimes the melodic line is indicated with the term "espressivo" instead of a different dynamic sign. It can also be indicated with "marcato". It depends on what kind of expression the composer wants. You can also meet the term "solo".

I get the impression from your question that you seem to want to make a huge amount of possible graduations. A graduation that is not possible with the usual amount of dynamic signs. In that case you would probably need to do something like what @guest suggested. Regarding using the expressions più p, meno p, più f and meno f: They should be used in the conventional way. Don't use known expressions with new meanings. That is mush too confusing for the musician. Also be aware that music is subject to interpretation no matter what you do. But that makes live music exciting and refreshing.

Please first read my answer to your related question.

The simple solution is for Violins 1, 2 and 3 to land at p, pp, and ppp respectively (or if you prefer, mp, p, and pp). This means that Violin 3 should be the softest of the three, Violin 2 a tiny bit more, and Violin 1 should come out the most but should still be in the realm of soft.

There is a trick to indicate which voice should come out more. You can mark that passage solo. That ensures that the audience hears primarily the "solo" voice, and that everybody else backs off and allows that "solo" voice to come forward.

Note, there are other things you can do to control volume:

Not the answer you're looking for? Browse other questions tagged theory notation dynamics or ask your own question.

4
How should I notate an intermediate dynamic between mp and mf?

4
To which notes do dynamics notation apply? (eg. pp)
2
How does one describe the level of playing that is neither piano nor forte?
6
Are single coil pickups better at catching picking dynamics?
4
How should I notate an intermediate dynamic between mp and mf?
0
How to indicate divisi with specific uneven players
2
Repeated forte dynamics in more than 10 measures, What does that mean?
4
What is the generalized terminology for continuous changes?
10
How do I write hairpins and dynamics between staves in LilyPond?
2
Bass Guitar Nomenclature for Intermediate Players