Would this note from Consolation No. 3 be considered a nonchord tone?

I was playing through Consolation No. 3 by Liszt yesterday, and I had a theory question about something.

In the second measure of this picture, the harmony is an E major triad. This section is in A minor, so that would be the V chord. In the top melody line, there is a G natural being played. This makes the descending line sound smoother rather than having a G# go to an F natural.

Would you consider the G natural a nonchord tone in this case? I’m wondering if there are arguments for and against classifying it as a nonchord tone. I’d love to hear some thoughts. 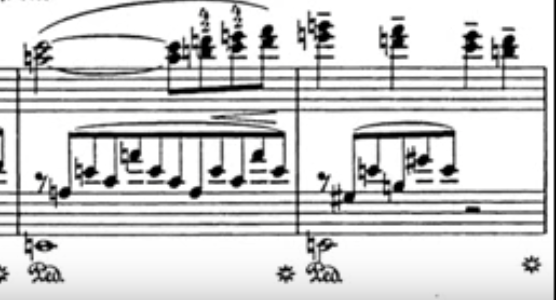 There is certainly no G natural in the chord of E major, so yes, you would regard it as a nonchord tone. When there is a clash like in the above example, it is called a 'false relation'. It is simply a chromatic contradiction between two voices.

Mind that G (and F) belong to the melodic scale downward of Am and G# is the lead tone of E7 - the V7 of Am. We also have DF in the next chord. This explains the clash of G and G#.

Edit: I didn’t know the term false relation (Jomiddnz) I‘ve looked up this site and now I see ex.2 is the case I mentioned:

It's also worthwhile to point out that G# is part of the harmonic A minor scale, and G natural is part of the natural A minor scale. (In effect, minor keys borrow the dominant 7th chord from their enharmonic major key so as to have a leading tone on the seventh scale degree. Hence the term "harmonic" minor; the notes that are used in harmony.) So, Liszt is using both the natural and harmonic scale notes at the same time.

There's a further ambiguity here that's interesting. If you just took the top notes of the two measures and played them by themselves, you'd probably swear that they were in C major, the relative major of A minor. I'm quite sure that that is intentional, and one of the reasons that he uses G natural in the melody instead of G# in the passage. It's sort of like the melody is in C, and the harmony is in A minor.

One gets the feeling that he doesn't want to wander too far into a minor mode context, which is rather borne out by the fact that the similar later passage (around 2:46) is harmonized with a (very) standard I64-V7-I progression in the home key of Db.

Not the answer you're looking for? Browse other questions tagged theory harmony nonchord-tones or ask your own question.