Will an accidental in piano sheet count for second voice as well?

I got this passage where the first voice got a sharp on the F (top staff). 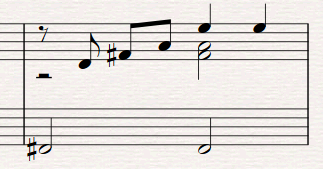 It's written for Piano, so there are not really actual voices, it's basically just written in two voices for clarity. My question is, if it's written like this, does that sharp also count for the F in the second voice, or would I have to give it an extra sharp?

I have always seen accidentals as applying to the staff, not the part. Imagine you were writing for multiple voices and wanted to double the first F# with a quarter note sustaining until the half note. Simply doubling the F# with a downward pointing stem would be the correct notation: 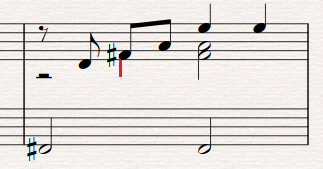 And nobody would argue that the lower voice is natural because it is not written like this: 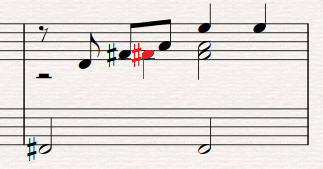 Good notation is all about clarity, and as written I would immediately assume the second F is also sharp. Conversely, if you DID want it to be natural, this would not be clear to most musicians and would likely be misinterpreted unless marked as a natural.

Side note: you should be able to hide the half rest in the virtual lower voice at the beginning. The downward half notes essentially indicate that the parts are split at that point and the half rest can be inferred (unless you are writing for multiple real voices and want to explicitly tell the lower voice musician to not double the first half of the measure).

In piano music at least, an accidental is in effect on the line or space on which it occurs, and for the entire measure. It is not in effect for the notes an octave (or more than one octave) higher or lower, or for the same note in the other staff. In your example, all the F's are played F#. So no, you don't have to (and shouldn't) put an extra sharp in there for the second F, just because it's written in a different voice.

Not the answer you're looking for? Browse other questions tagged piano notation accidentals or ask your own question.

2
Accidentals do not apply to all voices in same clef?

7
Where do accidentals go when voices overlap?
1
Is it fair to say the treble clef is optimized for piano?
2
half note and eighth note stems for voice parts
3
Unplayed 2nd voice in notation - spaces or rests
1
How to notate divisi with voice for solo and voice for the others
1
Switching between voices on a multi-instrument staff
1
Piano: how to play (arpeggios in) music written for harpsichord
2
What is considered best practice for notating three polyphonic voices on a single staff?
4
How do I read this piano sheet music?
6
How to write a slur to nothing in LilyPond?