Guitar beginner - What does this card show?

I am a beginner (just had 4 hours with a teacher) and I bought something where I can read the notes for the fretboard to better learn them. Also there was a card included with the following prints: 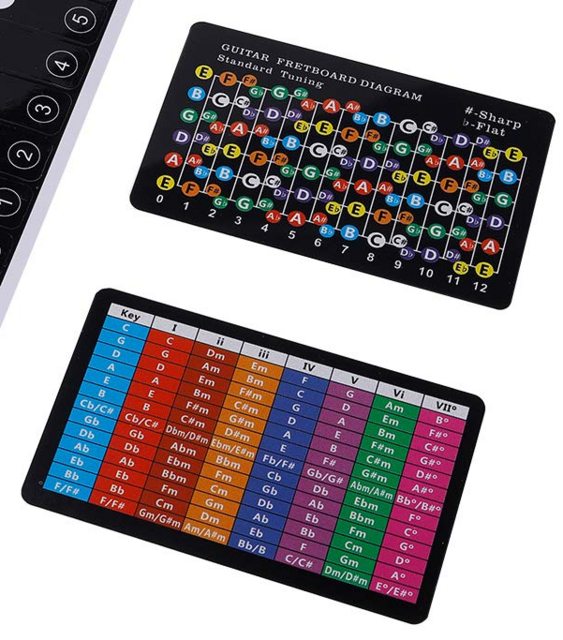 The upper one is clear to me, it shows the notes on the fingerboard at which place etc.

But I have no clue how I should read the lower one. Can someone explain that to me? How can I read it? What does it show?

The lower card shows the chords that go with the tones in each key. The chords built on tones of a scale are often referred to by roman numerals, for example, the root tone is the I, the next tone in the scale is II (or ii, if the chord is minor), the fifth is V etc. Often, chord progressions are referred to by these numerals, like the Blues progression: I-IV-I-V-IV-I. In that way, you can discuss the functions of chords in a piece, independent of the key that it is transposed to.

The card shows you how to translate that back to concrete notes and chords in a given key. So when you're in the key of A major, you find the row that has "A" in the first column, and then look up the columns that have the right numbers. In this example, the Blues progression translates to A-D-A-E-D-E. If you want to play a blues in F, it would be F-Bb-F-C-Bb-F.

For each note in a key, you can build a triad consisting of the notes in the scale - the so-called diatonic chords. The card also shows you what kind of chord you get in major scales: without extra symbols next to the chord, you get a major chord. The "m" next to the note refers to minor triad. The "o" refers to diminished triads.

Just to complement Richard's fine answer, the name for this kind of chart is Harmonization of the Major Scale (in all 12 keys).

Here is an elaboration to @Richard Metzler's answer regarding the keys on the lower card:

C major is one key.

But there are only 13 rows because two rows each have two keys. I guess that is because the size of the card doesn't allow space for 15 rows, otherwise I don't know why there aren't 15 rows.

7
What's the difference between the Nashville Number system and a Roman Numeral System?

8
Black stains on my fingertips after playing a new guitar
4
How does the guitar demonstrate volume?
3
How do you transform tune or hum in your mind to actual music on guitar
3
What's the proper technique for fretting chords on a guitar to prevent hand cramps?
3
What pen to use for autograph on guitar, and how to protect it?
3
Possible to place a chord diagram summary before the music notation in MusicXML or MuseScore?
3
Does the root note fall on the same place using CAGED system on guitar?
1
Guitar terminology : A word for a set of positions on the fretboard
3
How can I move my left hand up and down the fretboard, minimizing movements without getting lost?