Okay, I came across a bit of a wrinkle in the paper as I analyzed the third movement of Beethoven's Sonata Pathetique. It has to do with this passage in the C section(which is in Ab major): 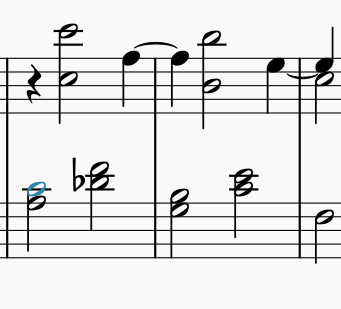 For those of you wanting bar numbers, those are bars 92-94 of the third movement

The previous passage which had suspensions was very easy for me to analyze. Here is how I analyzed that passage: 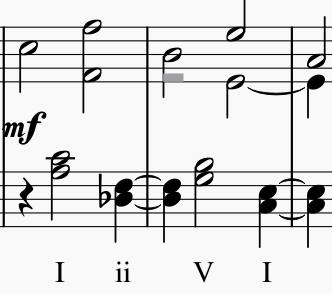 Again, for those wanting bar numbers, those are bars 88-90 of the third movement.

Okay, so what if I do analyze it differently? Here is what I get: 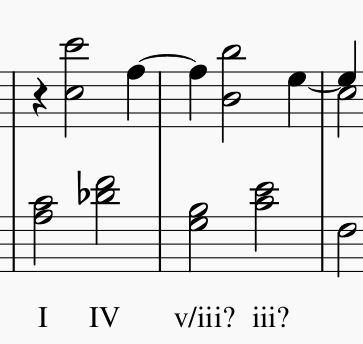 That is, if I analyze it differently to avoid the root paradox. What if I don't do that and I take it head on? Here is what it would be analyzed as if I took the root paradox head on: 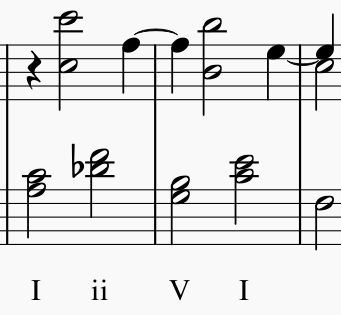 Now that looks just like the previous suspension passage. But I don't see a Bb to confirm ii, an Eb to confirm V, or worse yet, an Ab to confirm I in the last harmony. The Bb, Eb, and Ab are the roots of their respective harmonies and not having the root leads to the paradox of looking like the same harmony, but impossible to be the same harmony.

So how should I analyze this passage? Should I take the root paradox head on and just ignore the missing root notes? Or should I go with the unconventional v/iii to iii motion? Or should I do neither? If neither, what should I do? Beethoven is really confusing me here.

These two passages are exactly the same harmony, but with different displacements in RH and LH rhythms. Perhaps a triad does not exist without a root, but a chord can have no "root."

This is the problem with analysis. I am pretty confident that Beethoven wasn't sitting around deciding what the chord progression was going to be. Instead, he got clever and said "hey, I know how I can use the exact same notes but switch up the octave and change the beat which they come on and it will sound really cool and different!"

There is a lot more interesting stuff going on in here, like how the RH and upper LH notes are echoing octaves. Just because they are moving in contrary motion doesn't make it conventional. (It is also interesting where the notes in the RH are doubled, since leaving it undoubled would draw the ear to a parallel movement.)

In analysis, one is trying to wedge a piece of art into a system. That's not how art works. Instead of trying to label it, I would just describe what he does and leave it at that.

I-IV-viii-iii... This is just your run-of-the-mill circle-of-fifths progression, with a bit of extra suspension, and missing the fifths of the chords.

5
How a chord is analyzed as a "chromatic mediant of the V"?
9
Unplayable turn in Beethoven sonata
3
How to overcome emotional tension with this Beethoven rondo
4
Chromatic 7th chords going upwards in Beethoven
7
Is this really better analyzed in G minor than in Bb?
3
Musescore issue: Bar going across the page
1
Augmented triad in Pathetique Sonata? How does it function?
5
How should I analyze this passage? As vii°7, V7, or both?
2
Repeated forte dynamics in more than 10 measures, What does that mean?
5
How to analyze mm. 5-8 in the first movement of Beethoven Piano Sonata No. 8