I got a home organ in my living room, and I get a lot of bass resonance. I'm looking for easiest ways how to get rid of these. The room is 350x590cm and 260cm high, the organ stands in the corner, about 8cm from each wall.

Experimentally, the most noticable resonance seems to be vertical and in the range low G--low B on 16' ranks.

I would of course prefer something effective that can be hid behind the organ, if possible, but I understand that this can be difficult. Second reasonable option is arranging some (book)shelves above the organ, if this helped, but I have no idea how effective this could be. 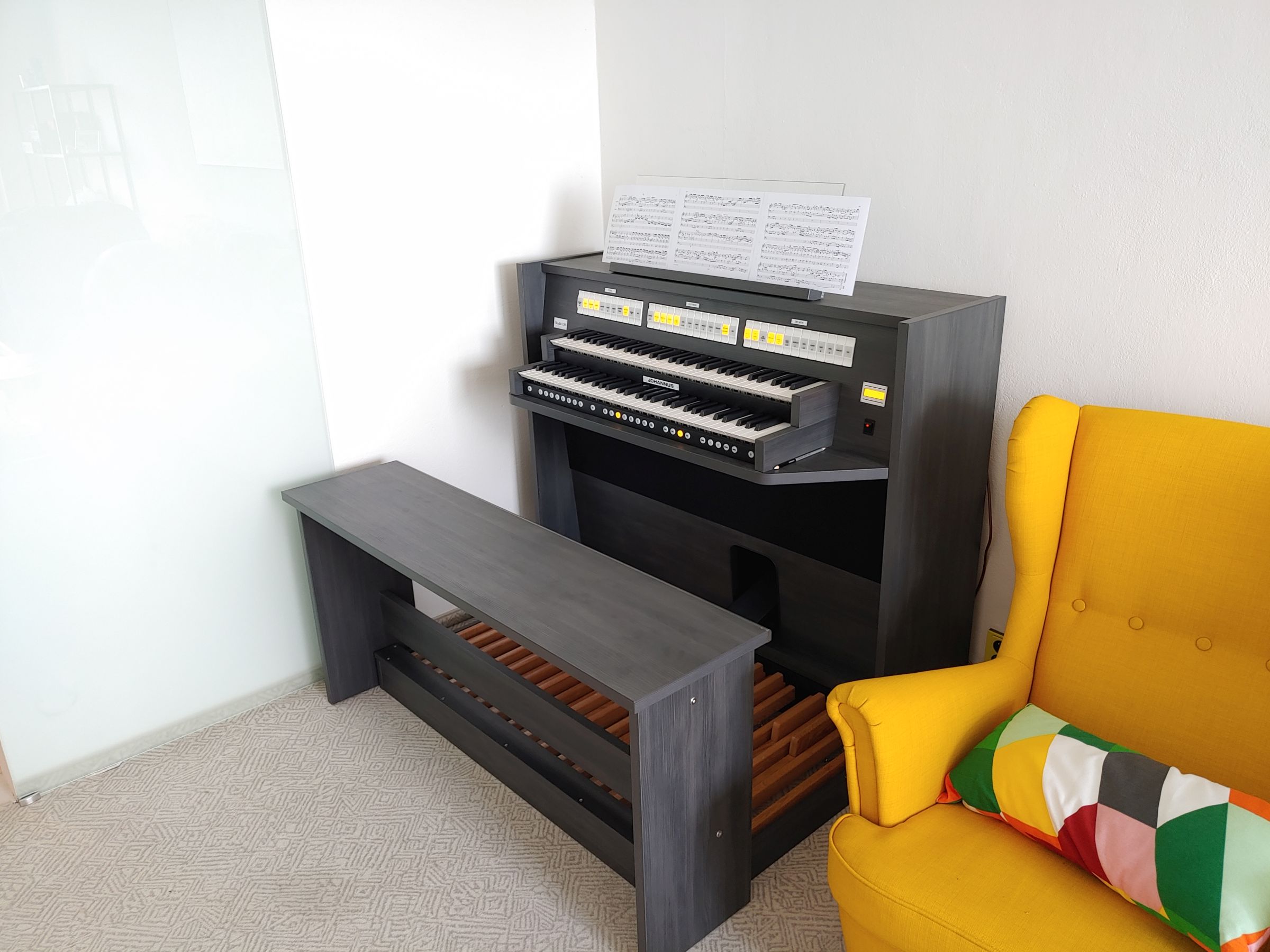 Your basic problem is that you have a sound source in one corner of what looks like a box-shaped room. That in itself will boost the sound output at low frequencies, by reflecting the sound coming from the back of the instrument into the room.

If the organ amplifier has some type of "tone control" or "equalizer," simply reducing the bass response may fix the problem. The picture looks like a Johannus organ, so you probably already have a separate amplifier and speaker channel for the pedals. You may be able to adjust the balance between the divisions, or route the pedal to an external speaker somewhere else in the room which avoids the resonance problems. In a fairly small room the bass sound will be almost completely non-directional, so the speaker could be positioned anywhere to minimize problems with the room acoustics.

The walls and floor are effectively forming a "corner cube" reflector which will return sound waves approaching from any angle back in the exact opposite direction. That is very desirable property of a corner cube if you are putting a radar reflector on a small boat for example, but not if you want good room acoustics.

Assuming the other walls are similar to the one in the picture (i.e. flat and reflecting sound well) you are probably creating a standing wave as the sound is reflected back and forth between the parallel walls.

The most effective solution would be relocate the organ somewhere in the middle of the room, but that might not be practical. If you can turn it through an angle of say 30 degrees from the wall while keeping it in the corner, that might help. You may have to move the yellow seat slightly out of the way, but not by much.

Another line of attack is to damp out the reflections. Covering the opposite wall with something that absorbs sound, like a decorative curtain, will help. A cheap way to experiment with that idea is to "borrow" a duvet from your bedroom and see how much effect it has held up against the wall. An open door is also a good way to avoid reflected sound by removing it from the room completely, if the layout of the house is suitable.

Breaking up the reflective surface with bookshelves or something similar will also help, but they will be most effective on the opposite wall, not behind the organ. The idea is not so much that the books and shelves will absorb the sound, but that the irregular surface of different sized books(or any other objects that you might want to display on shelves) will disrupt the standing wave between the two parallel walls.

If you are in a house, a really radical solution (which has been built, and does work!) would be to move the pedal speaker out of the room completely, and install a speaker in the roof space above stair well, using the whole ceiling as an "infinite baffle". This doesn't involve designing a speaker cabinet - you literally just have a speaker with the cone facing downwards and the back open into the roof space, with a lightweight dust shield protecting the back of the speaker from dirt falling onto it. If there is a removable panel in the ceiling to allow access into the roof space, that can be used to mount the speaker cone without any structural alterations to the building.

The speaker will then be operating into an air column about 16 feet long from the top of the stair well to ground level, which is of course the same length as the longest open organ pipe of 16' pitch. A surprisingly low power amplifier (only a few watts) will be enough to produce a very smooth bass response through the entire house, if the other residents apart from the organist don't have any objections!

Not the answer you're looking for? Browse other questions tagged organ resonance or ask your own question.

5
Is real organ music playable with digital piano?
1
Electric guitar problem, bad resonance?
0
Organ for a Beginner
1
Terrible electric guitar resonance
1
How to practice organ at home?
2
Resonance in electric guitar
2
Bass Guitar Metallic Ringing / Resonance?
5
What type of bass clef is used for the organ pedal?
4
When combining a mechanical and digital manual into a single organ, how would you handle the difference in delay?