What are some guidelines for doubling the same tone in the upper voices (tenor, alto, soprano) on the same pitch, as well as in different octaves? I am specifically talking about doubling in upper voices, NOT doubling the bass. Are some of the combinations more preferable than the others (e.g. doubling the thirds as opposed to doubling fifths)?

Does it matter whether bass is in the root position or an inversion (obviously it does)?

It does probably matter, whether it is a triad or a dominant seventh chord, does it?

It seems there are many receipts for different cases (as read in Tchaikovsky's Guide to Harmony). Would have been nice to have a centralized set of rules and preferences.

Edit: In an original formulation, there was an example, which I decided to remove, for the answers were mostly directed to it and not the main part.

guidelines for doubling the same tone in the upper voices (tenor, alto, soprano) on the same pitch, as well as in different octaves

In root position you can double the root tone, then the 5th and the 3rd.

When the 3rd is in the Bass - you can study the following picture of De la Motte's Harmonielehre: He says that the rules are not referring to the practice. A little statistic shows that each chord note can or has been doubled!

except in the 1st inversion of the dominant V6: In this case the Bass note is the lead tone and shouldn't be doubled!

I've already posted this copy in another question: 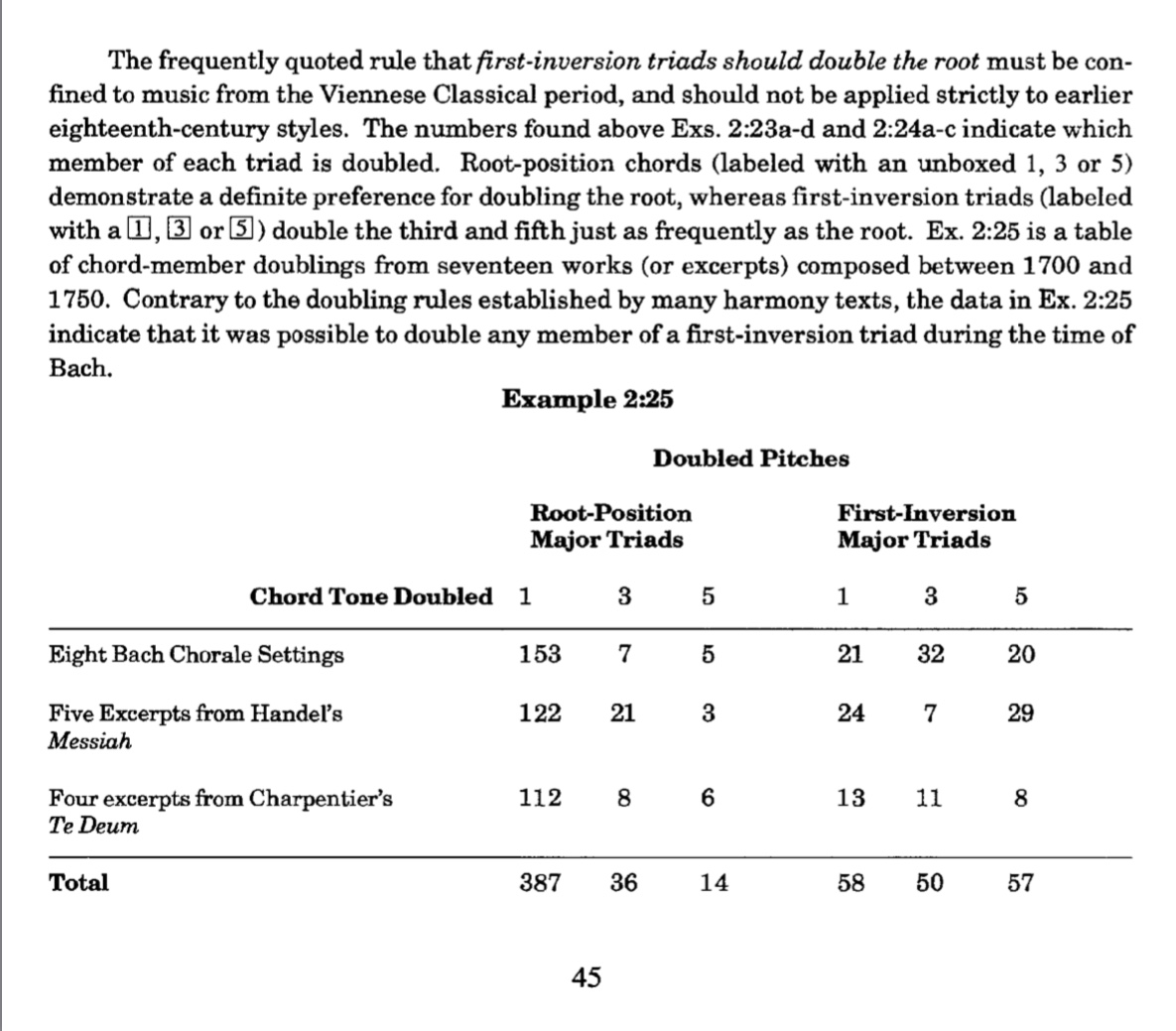 In this case, it would not be good: it creates consecutive fifths between tenor (b' c'') and bass (e f).

The rules for 4-part voicing may be modified a little when dropping into 3-part voicing! A doubled major 3rd is much less prominent when it's a unison. But note that the examples you give are all interrupted cadences in a minor key. The note being doubled, though the 3rd of the chord, is also the tonic. You may consider this a mitigating factor.

Not the answer you're looking for? Browse other questions tagged harmony counterpoint or ask your own question.

1
4 part harmony chords
1
Help harmonizing a piece
12
Doubling the third of a root position major chord in four-part harmony
5
Will this help me avoid parallel octaves in future fugue attempts?
5
Hidden fifths between tenor and soprano in Tchaikovsky's "Guide to harmony"
3
Dissonances with bass versus in upper voices. 4-part harmony
2
Is there a rhythmic counterpart to voice leading? Is counterpoint supposed to fulfill this role?
4
Does tempo affect use of non-harmony notes?
2
Four part Writing: When must a perfect fourth be resolved?