High E string sounds weird even though it's tuned

This is becoming a nuisance when playing chords and not to mention fingerstyle.

If anyone could suggest how to fix this it would be appreciated.

(also sorry if this doesn't make sense, it seems my almost 3 years of guitar playing hasn't taught me nothing theory-wise lmao)

That sounds like your E string already touches the first fret without you doing anything so there is no difference in pitch between playing it "open" and fretting the first fret. It may be that it slipped out of the nut or that the groove in the nut is cut in too deep (a steel E string may cut itself deeper into the nut when tuning) or that the nut has cracked and the string slipped into the crack. Or the nut is displaced and the string action too low in consequence. You say "acoustic guitar" but don't state whether you use steel or nylon strings: most of the problems are more likely with steel strings since then the string is so much thinner.

It's hard to make sense out of this question. But suppose that the action at the nut is too low (the nut is slotted too deeply for that string or whatever). Suppose it is so low that the string basically "self frets" at the first fret. That explains how there is no difference when fretting at the first fret versus not fretting: the same pitch is produced.

If the nut action is too low on an acoustic guitar, there are various solutions. If the original nut is re-used, it has to be shimmed to make it higher. This means removing the nut, and inserting a shim (such as a strip of wood veneer) between it and the neck. Then if the other string actions become too high, their corresponding nuts in the slot have to be filed to make them a little bit deeper.

As a quick and dirty temporary hack just to get playing, you could stick something between the nut and the string to prop the string up a little higher, such as a small piece of pop-can aluminum bent into a tiny half-pipe shape.

Lastly, perhaps that first fret itself is not inserted properly into its slot. We say that the "fret is out", in guitar jargon. Even if frets are seated into a neck properly, they still have to be leveled (basically sanded to the same height) and crowned and dressed (reshaped and polished). This is not always done in the factory for mass produced, inexpensive guitars. They just stick the frets in and ship it.

Err... is it possible your guitar has a zero fret?

From what I can tell, a "zero fret" is a fret which sounds the open string's note when played, and a small number of guitars do indeed have them. If so, that would explain the issue you seem to be having. 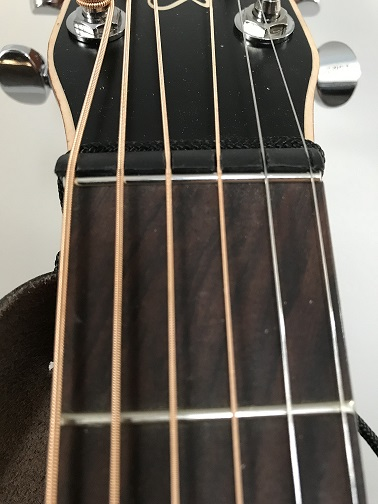 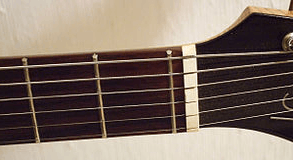 12
Is it good/bad to play guitar with low tension string?
4
How to keep ANY progress and have fun again
3
It's really hard to press my acoustic guitar strings and I can't figure out why
0
My acoustic guitar guitar fell to the ground, can it be fixed?
3
How big a handicap is lack of "cutaway" in guitars?
6
My guitar strings go loose when I tighten them?
2
Are intonation issues in a cheap acoustic guitar fixable?
0
Playing a specific high note on my highest string also plays a half step higher
2
Guitar practice