Is there a relationship between prime numbers and music?

Is there a relationship between prime numbers and the series of overtones and their frequencies?

I've found links to Euler's research about math and about music, and I got goose bumps when I found that here is a whole universe of correlation.

Can someone breakdown this theory for dummies like me?

I mean especially the correlation of string-length, overtones, and prime numbers. After thinking about it and trying to explain it to me, I've found that this is very simple, but I never realized this relationship.

There is one observation with respect to primes. No prime power (except 0) is a power of any other prime. Thus no number of stacked fifths will be equal to any number of stacked octaves. (Taking a fifth to be a ratio of 3:2). Thus, any useful music over more than a few notes will need tempering.

Other than this, there isn't much except for figuring out how to temper the difference between (for example) 7 octaves and 12 fifths in a practical manner.

I would say "trivially, yes".

Trivially, because every branch of human thought that can be analyzed and/or developed using numbers and basic algebra, and particularly multiplication/division, has a meaningful interaction with prime numbers.

That is because the very nature of prime numbers is they create patterns in how numbers in general are multiplied and divided.

Here is a list of only some of the areas of music where prime numbers have important interaction with the concept because of the usefulness of multiplication and/or division of whole numbers:

There are overlaps between some of those areas, as many will surely notice.

Specifically regarding Euler's ideas, they don't seem particularly helpful to me, at least from a musical point of view. They might be interesting in their own way, but I think there's a reason that people don't frequently refer to these ideas when talking about music. Also, Euler's mathematical innovations are much more exciting.

YES! And it's a fascinating one.

The distribution of primes in entirely determined by the interaction between the 'product-waves' of smaller primes. Each prime produces products at 6n+/-1 according to a rule such that there are two products at this location in every 6p numbers. For instance, the products of 5 occurring at this location do so always at 6np+/-p, thus twice in every 30 (6p) numbers.

This is all to do with interacting frequencies and number theory makes extensive use of Fourier analysis. The trick to the analysis is to recogise that there is no 'music of the primes' but is, rather, a 'music of the products of primes', and this is what determines the distribution of primes.

Anyone with a grasp of acoustics and the mechanics of vibrating strings will easily be able to grasp how the primes work.

The era of equal temperament ushered in by Bach has rendered ratios such as 3:2 obsolete. Music of the past couple centuries that uses a 12-note scale changes the frequency of each ascending note by multiplying the current note's frequency by 2^(1/12) which we call the twelfth root of 2. It makes sense because that is a geometric progression.

Each half step requires multiplying the frequency by 2^(1/12) or 1.05946309436 which is an irrational number (which means it is not and cannot be the ratio of any two integers.) If you multiply that number by itself 12 times, it means you have moved up the 12 semitones (half-steps) that make up our 12-tone scale, and you get the integer 2. Every octave is the second harmonic, or double the frequency of the starting note. This means that a particular note in any octave will be "in-tune" with that note in any other octave. hence all As are in tune with each other, all D#s are in tune, etc.

That is not true for fifths, which will have a "beat" or wavering sound when played against the root note. This may be the origin of the exaggerated vibrato many singers inflict upon our ears these days.

Sorry if I busted any bubbles, but ever since Bach, instruments which use the 12-tone scale are designed and manufactured to be tuned to, and musicians spend their lives learning to play in, equal-temperament, using the twelfth root of two, which is an irrational number meaning it cannot and does not equate to a ratio of any two integers, prime or not.

Other scales with different numbers of notes may have some intervals that equate to the ratio of two integers and it may even be possible to base the intervals on a ratio of two primes, but such tuning would be almost completely incompatible with the common 12-tone system. (Unless of course your composition was "Sonata for Cat and Lawnmower")

Now, enough math for one day! I'm going to go back to my composing.

This is my answer (but it is not just a kind of Q-A (as I really didn't see this relationship before!)

Starting with the smallest primes:

That's what we have learnt in the primary school: these numbers can only be divided by 1 and by themselves.

the overtones, (harmonics) and the frequencies: note that I've edited wavelength to length of string!

in the 1. column of the chart is Length of string in the 2. the Frequency factor in the 3. the resulting tone

as we can see the bold frequencies are the new overtones all others are multiples of already derived overtones which can obviously be divided by an other prime that has already been derived. This tabula shows that each new harmonic tone must obviously be identical with the next prime number that can't be divided in another number than one or itself. That's why some may say this is trivial but it has not been trivial to me until now! There is not a similarity or correlation between the harmonics and the primes. They are identical.

With this last sentence I meant to say:

Prime numbers and overtones are one and the same thing - only in different terms and medias, as all not-primes numbers must be octavas or fifths of overtones of those we have already developed: e.g.

But I see now what I have missed: the pythagorean comma: 7 octavas are not equal 12 fifths. I had completely forgotten this point!

Here I have found an aritcle saying the same:

The harmonic numbers are equivalent to the values of the source harmonics in all previous discussions of harmonic evolution. Since we only studied those up to Quintality, most were prime. But as we can see from the chart, numerically, most source harmonics and harmonic multipliers are non-prime, any of which is a product of primes – its own series of harmonics and multipliers. We will call the first in the series its root harmonic, which is thus distinct from the product itself – the source harmonic. It determines the root spiritual or physical nature of the product’s lineage.

It says equivalent what I think this is better than one and the same.

and here's another link that says they primes and harmonics are eyuivalent: 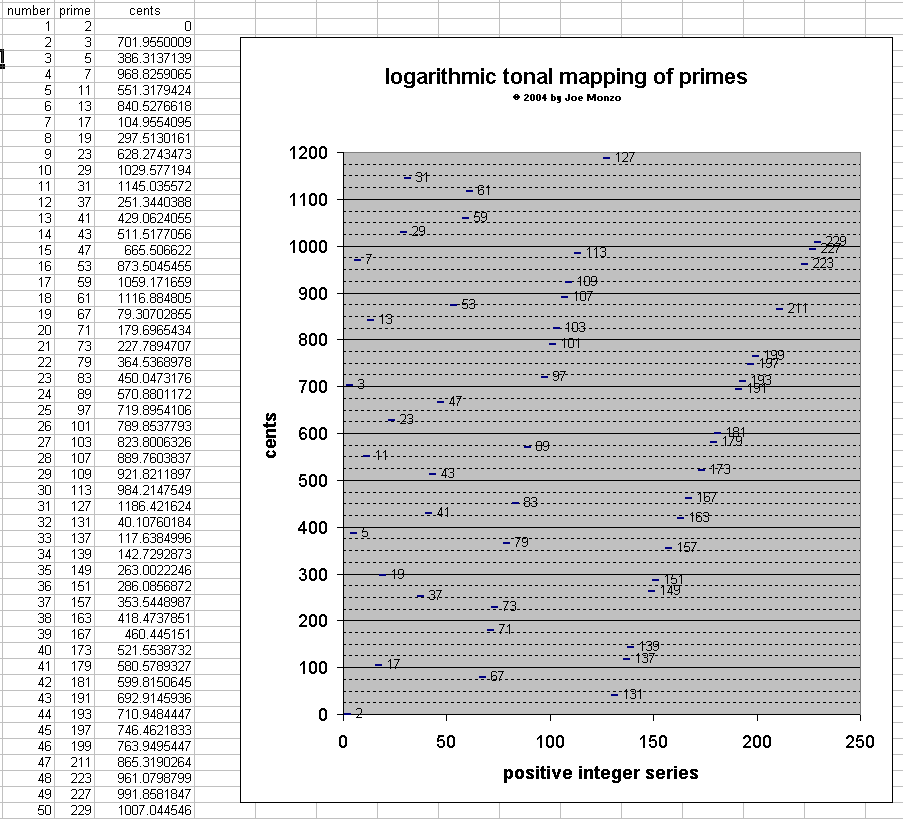 Not the answer you're looking for? Browse other questions tagged history intervals frequency or ask your own question.

19
Are octaves, fifths, fourths and thirds considered as "consonant" in all music cultures?
16
At what point in history did the relationship between pitch and frequency become well-known among musicians?
3
Why aren't notes and intervals plain numbers?
6
What are the differences between different marching music traditions?
11
Why is the relationship between frequency and pitch exponential?
3
Is there symbolism in Brahms No. 1? How does this, and the "struggle between major and minor," square with his views about absolute music?
5
Difference between drum sounds and melody sounds
5
How does counting E twice explain the discrepancy between the 5th between C and G vs. the 3rd between C and E, 3rd between E and G?