Can I use a ribbon/dynamic mic preamp with a Condenser mic?

I have a Condenser Mic, phantom power, a sound card, and a preamp designed for ribbon and dynamic mics. I bought the Preamp thinking it would work but apparently it draws power from the phantom source, which means the mic isn't getting power. Would adding two phantom powers, one before connecting my mic to the Preamp and one after the Preamp work? Or will I have to buy a preamp with its own power source? I attached an image in the product description which seems to imply the Preamp can't work with condensor mics because it blocks the flow of and uses power from the phantom source 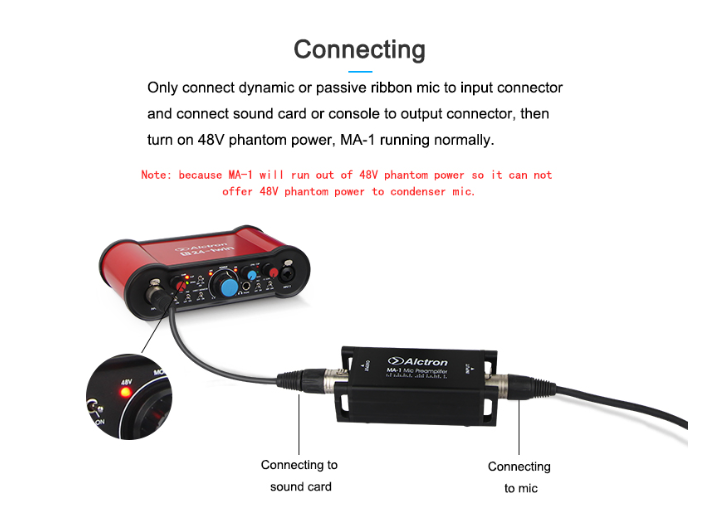 This is common among inline preamps; if it consumes phantom 48V to power itself, it won't pass any of that power "upstream" to the mic or other equipment.

I will say it's unusual for an audio interface to need extra help boosting the signal of a condenser. I've dealt with interfaces that had trouble with some of the less sensitive dynamics like the SM7, but most condensers are pretty lively. Have you tried just running the mic directly into the interface (you didn't tell us exactly what that was) and seeing what you get?

Not the answer you're looking for? Browse other questions tagged recording microphones audio or ask your own question.

6
Home recording: Preamp or Dynamic Mic?
2
Home studio setup with Mac & LogicPro
0
I need help with my microphone
3
What do I need for my condenser microphone to work correctly?
4
Large diaphragm condenser mic without pop filter
1
Are there mics that need an external sound card or audio interface?
1
Focusrite Scarlett and mic preamp
1
Condenser mic to two xlr inputs, would phantom power destroy it?
3
What cable do I need from Dynamic mic into mixer and why XLR to TS but not XLR to TRS?