How to transcribe an arpeggiated 4-note chord to be playable on a violin?

I finished arranging the first movement of Beethoven's Piano Sonata in F minor for a string quartet, only to find out that the chord at bar 7 is impossible for a violinist. My instinctual reaction was:

No, it isn't impossible, listen, it is arpeggiated. Arpeggios are easy. And your typical triple or quadruple stop is an example of arpeggiation out of necessity, not out of beauty.

The person who told me that the chord was impossible, also happened to be a violinist herself. And here was her response to my reaction:

When it is written down as an ordinary chord, we try as much as possible to make it sound simultaneous. I would suggest that you stick to the C grace note as you have in the previous 2 bars. It will still be difficult since it is a leap of an octave then, but it won't be an impossible task.

And I will only be showing the arrangement of a few bars for the sake of space here, but that should be enough for context. Here is my arrangement as it is now, just taking Beethoven's notes and spreading them across the quartet: 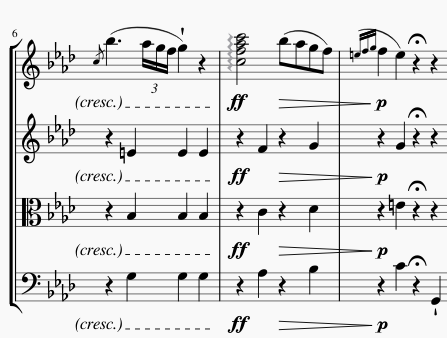 You can see the arpeggio symbol that I made invisible in Musescore in the image at that chord.

The violinist that commented on the chord saying that it is impossible is suggesting that I do this instead: 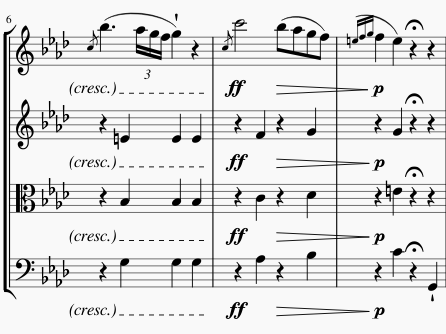 Now, there is another option, but one probably not familiar for most violinists, leaving the arpeggio symbol visible. Most arpeggios on the violin are written out explicitly, with a note value for every note of the arpeggio, not like an arpeggiated chord(which is what Beethoven wrote).

If I go with the grace note option, that leaves me wondering what to do with the other notes of the chord.

Should I go with the grace note option that the violinist is suggesting to me? And is the quadruple stop as I have it right now really an impossibility for the violinist or is it just difficult? I mean surely a closed position triad including a note an octave above the bass note is possible as a quadruple stop for more than just the lowest G major chord in the violin's range, even if it has to be arpeggiated.

The octave your violinist suggested is fine. Another possibility is the following:

Why did Beethoven not write the above chord in his piano sonata? Because that major tenth is rather awkwardly wide for a pianist's hand. The chord he did write spans only an octave and so fits the pianist's hand. People writing for the piano prefer what is easier (and prefer not to write what is needlessly hard) for a pianist to play.

Likewise, seeing as you are writing for a violinist, it's as well for you not to write what is needlessly hard for a violinist. Chords that span an octave, and are played with piano keys that fit under the fingers well, are idiomatic for the piano. What's idiomatic for a violin is chords made up of fifths and sixths. Fifths because the instrument is tuned in fifths. In chords of more than two notes, sixths are easier than small intervals because a small interval entails placing a finger on a lower string but avoiding it touching higher strings, and this might be tricky.

Don't be so literal minded. This is easy to play, and effective: 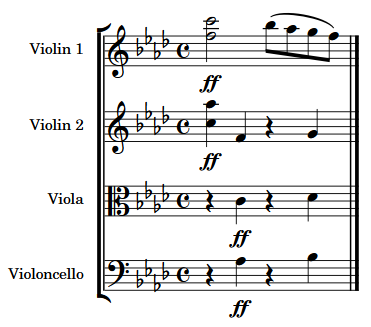 If the quartet know the original piano version, they can easily simulate the arpeggio simply by violin 2 playing a bit ahead of the beat.

Disclaimer: I'm not a violinist. What follows is all head-knowledge, not practical experience.

As you know, since a violin bridge is curved, no more than two strings can sound at a time, so any chord will of course need to be arpeggiated. This isn't that big a deal, and is part of the characteristic sound of violin stops.

However, you also need to consider where the fingers will be stopping the strings. As I'm sure you know, violin strings are tuned in fifths. In order to play a chord, each note must be located on one of those four strings. Your chord has a high C, E♭, G, and a top C, which would need to be played o the G, D, A, and E strings respectively. The C on the G string is up an octave and a fourth (up 17 semitones), which is well past the half way point along the string. Now I'm not sure how high a violinist can go up the neck, especially on the G string, so I don't know if that's actually possible. But let's assume it is, and look at the rest of the chord. The F is going to be played on the D string, a minor third more than an octave (so 15 semitones up), the A♭ is going to be played on the A string (13 semitones up), and the top C will be on the E string (8 semitones up). You can think of these counts of "semitones up" as if they were imaginary frets on a guitar, so your essentially asking for a chord that requires fingering on the 8th, 13th, 15th, and 17th imaginary "frets" -- covering a span of 9 "frets". I believe in normal violin playing, the fingers are all within about 5 or 6 "frets" of each other. Nine is probably more than what can be stretched.

This is why violins are not good with close-voiced chords. If you want to retain a chord, one possibility might be to use a more open voicing. Obviously, you need to retain the top C, as that's the melody note. Skip the A♭ below that, and go down the F. That's a fifth below the C so it will use the same 8th "fret" as the the C on the E string. Then add the A♭ a sixth below that (and octave below the one you have written). That fits on the D string at the 6th "fret". At this point, you've got all thee notes of the chord covered, and you may not even need to add a fourth note. You'd have to check with a violinist to be sure, but I would think this open-voiced chord should be more doable on a violin.

A completely different possibility, though perhaps not elegant, would be to split the chord up between the first and second violins. For example, the first could play the octave C that your friend suggests, while the second plays an A♭ and F (either separated by a third, or by a sixth as above). In this case, the 2nd violin's F on beat two could either be missed, or added as a double stop to the viola.

Finally, if you want to notate an arpeggio that isn't a quadruple stop, instead of using a chord with (or without) an arpeggio symbol, I think it might be clearer to notate it as a series of arpeggiated grace notes (as WillRoss1 already suggested). I say this purely from a notational standpoint, without knowing if it's any more playable, though Jomiddnz seems to indicate it is.

To play a chord on a bowed string instrument, even if by necessity of string crossings it is a spread chord (i.e. arpeggiated), the key point is that you want to be able to put all of your fingers in the necessary positions at the same time. That is impossible for the four note chord written.

It would be possible to rewrite the chord to be playable, by choosing notes such that they can comfortably be played one on each string in some position - this means going for a less closely voiced version of the chord.

The reason you see more arpeggios written out with note values in string music is that they are being played as arpeggios rather than "as close to simultanous as possible" - meaning that the player is moving their fingers around - strings are much more limited in the chords they can play comfortably than the piano, although scales and arpeggios generally work fine.

For this, if you don't want to rewrite the chord, you've got the option of putting some notes in the other parts. Alternatively, write the arpeggiated part as grace notes - so the player actually plays say C F A as an arpeggio as fast as possible, leading in to the top C (which would then be the only note held), similar to the start of the following bar. This, unlike playing it as a chord, should be possible

You might be able to meet in the middle and use a triple grace note, like in the next measure, only on C-F-A. Only having to sustain the high C might take it from impossible to challenging, while still maintaining all the notes from the original in some form. That said, I'm not a violinist and have no clue if this would actually work, so definitely run this idea by someone that knows what they are talking about first!

I'm a bit attached to the dramatic effect of having the first real chord of the piece - FORTISSIMMO - there...

I would suggest a more radical change:

Don’t draw attention to it.

Don’t make it stick out and ungainly. It’s a detail leading to a cadence . You are pedantically stuck trying to translate piano into violin.

It’s the leading (note of a short phrase)soon forgotten

I am not a violinist. If anyone can correct me, please do so and I will update this answer as necessary:

Play the chord as is. It isn't impossible to quadruple stop, just hard.

Because the bridge is curved, in order to strike all four strings simultaneously, you need to physically bend the two strings in the middle. This detunes the notes on those strings up, and must be compensated for by detuning on the neck in the opposite direction (playing less than a half-step lower than written). This is extremely hard and is rarely done. You have two options: either tell your violinist to play the chord as written, or move parts of it between the voices as necessary.

If your violinist is using an electric violin, or other violin with a significant sustain time (effect pedal?), you also have the third option of having her perform a pizzicato strum (like on a guitar) and switching back to a bow in the half bar of space she has.

Not the answer you're looking for? Browse other questions tagged chords violin arranging beethoven or ask your own question.

15
E flat or E natural in score of Beethoven String Quartet Op 131?
4
Automatic “regular” chords (not arpeggios) in FL Studio
2
Is this double stop playable on violin?
2
How to represent the staccato in the piano score?
2
Note not in triads chords
4
Simple way to add an additional octave in Musescore?
3
Can violins change notes in the middle of a double stop?
7
How to think of chord extensions when soloing over chords?