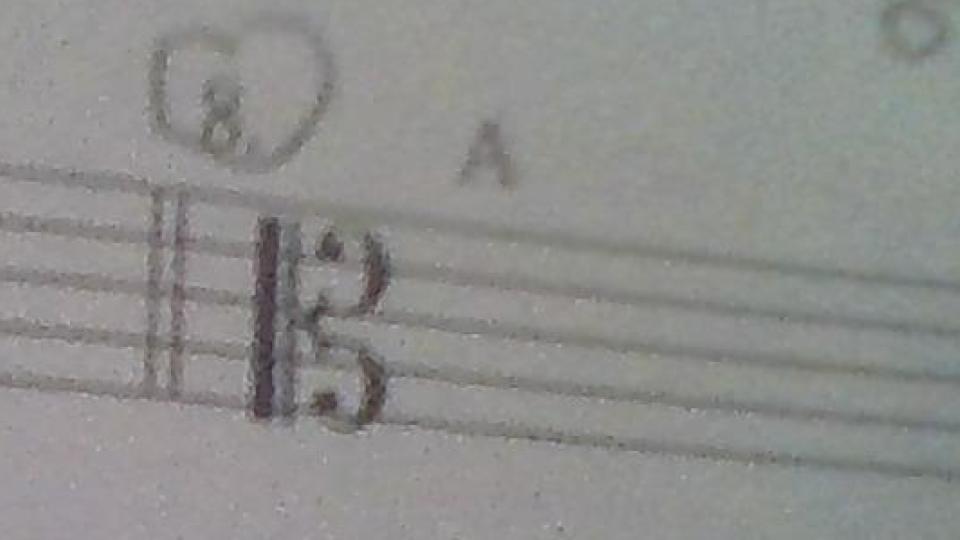 A friend of mine asked me for help on their theory assignment. Number 8 on the worksheet asked the student to write a certain scale with what appeared to be a standard alto clef, except that the point on the clef that usually indicates middle C was slightly shifted so that it pointed to the space below the middle line of the staff. (I knew how to do the actual assignment, but I had never seen this clef before with the 2nd space as middle C).

Details: Though the image attached is fuzzy, here are some details I observed. Most of them seem to support a notation error of some sort, but then again, I'm no clef expert, and there are some weird symbols out there in music (especially throughout history...?):

What's going on here? I think it's likely that this is a printing error of some kind, but even if it was supposed to be a regular alto clef, is there such a clef out there somewhere in the depths of theory?

This is definitely bad type setting.

I'm not aware of any conventional C clef that sits between two lines (although you can of course roll your own), but even if this was supposed to be between two lines, the answer would still be: Bad type setting.

In some old scores, the C clef is used in the third space (not the second) in tenor voice parts. Apart from the clef, the notation is the same as writing tenor parts an octave higher than they are sung using the treble clef. Some scores have the treble and "octave C" clefs superimposed to show this.

I suppose it's possible that somebody once used a bass clef and a C clef in the second space in the same way, but I've never seen an example.

But I don't think the exam question was about was about a C clef a space, since those notations are completely obsolete.

It just looks like bad printing, since the clef isn't really centered on either a line or a space. Maybe somebody tried to make some music notation with general purpose graphics software, and didn't do a very good job.

C clefs were used on every line of the staff, not just the modern "alto" and tenor "clefs", even up to the middle of the 19th century for vocal parts. In 18th century scores these clefs were also used for keyboard music as well as vocal parts to save leger lines. For example in organ music where the bass part was played with the pedals, the left hand part was often a bit too high for bass clef and too low for the treble, but fits nicely on one of the C clefs.

With regard to an example, which user45266 requested in a comment above, I just came across this situation in a score yesterday, which is what prompted me to investigate, and, ultimately, led me here.

Unless this joint was ghostwritten by Ives, the clef is unambiguously indicating that the third space should be middle-C.

The full score is here. 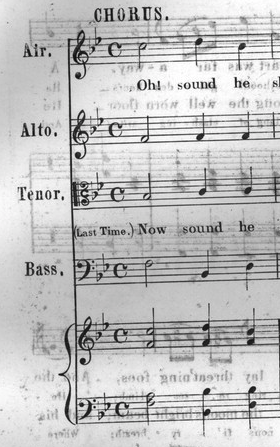 I've a small collection of Barbershop Quartet scores in which perhaps 1/3 put the Lead and Tenor on a staff with a C-clef on the third space (which is if course equivalent to the G-clef 8vo). I suspect this supports the idea that it is an American way of doing things. And not necessary archaic.

You’ giving the correct answers:

This must have been happened printing a not adjusted C-Clef on a template of notelines without clefs.

14
Where was the D clef used?
10
Which clef is used for the tenors here?

0
What is the purpose of two staff lines?
9
Why does this version of Für Elise have d# then e both with treble clefs?
15
What do these symbols mean?
6
How to hide individual staff lines in lilypond?
4
Dotted bar lines of different height
4
Where should I put the bass clef? Before or after the repeat sign?
2
What is considered a proper Cantus Firmus?
4
How to notate a phrase than goes up and down several octaves
9
Meaning of some symbols in classical guitar tablature
0
The Grand Staff Revealed?