Fingerpicking Barre chords: What bass string to use?

The bass string used should be the "root" of the note. e.g. If playing an E chord, one should pluck the E string, if playing a D, then the D string.

If one is using barre chords to, say, play an A# chord (based on E shape on E string), then which bass string should be plucked? The A or the E string?

Barre chords are transpositions of open chords; the root note stays on the same string:

This is of course also true for the scale degree of the other notes in the chord; which strings play the root, third, fifth, ... in an open chord doesn't change when you play that shape as a barre chord:

In addition to Your Uncle Bob's very clear answer.

There isn't really 'you are supposed to...'. The bass note is often the root, and yes, played with thumb. Main reasons - thumb is just where it needs to be, and the sound is good for a bass note.

Fingers can and do go where necessary. That's not always the case then of index here, ring there etc. A lot of the finger patterns I use vary considerably. There's one which uses thumb on 3rd then 4th, and a couple of fingers on the top two strings. So nothing is written in stone. I quite often use pinky - others rarely do. Sometimes (often) you make your own 'rules'!

With finger picking, there's sometimes an option to play an alternating bass pattern - 1-5-1-5. For that, using E shapes, 6 and 5 are used. For A shape, the reverse (with the barre obviously on all 6 strings!). That works also for C shape. G shape is tricky, with 1 and 5 being strings 6 and 4 - not too good. And D shape works somewhat with 4 and 5, again with an extended barre.

Q: What bass string to use?

The bass note and the root note of the chord are not necessarily the same thing. The bass note is the lowest played note, and if it's not the root, then the chord can be said to be an "inversion" - or it can be an alternating bass line, which doesn't really sound like an inversion, when the non-root note is played on a weaker beat.

Here is Dm and A7 played with open position chords:

Here are the same chords with barre grips: 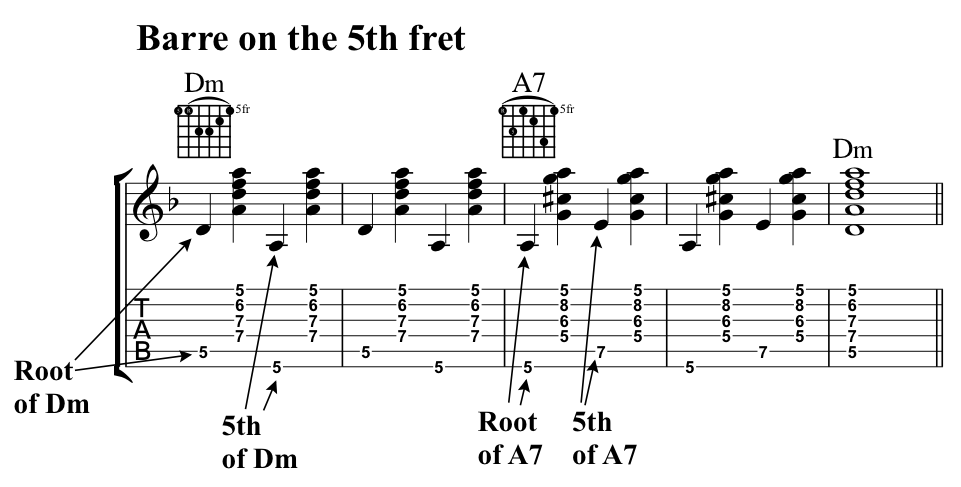 If you want to play "fingerstyle" guitar, then the alternating root - 5th bass pattern is a basic thing you need to know. After you get that going fluently, you can start using more advanced bass lines.

Not the answer you're looking for? Browse other questions tagged chords fingerstyle-guitar or ask your own question.

17
How to memorize seventh chords and inversions on piano?
10
Whole finger callous - for barre chords?
11
Barre chords kill my thumb!
7
Help me to find a way not to bar A-shape guitar chords with my ring finger
8
Fingerpicking with my pinky finger
9
Guitar - How to play two-string mini-barre chords?
3
Problem with G string while practicing barre chords
2
Where should my thumb be gripping when playing A shape barre-chords?
2
What's a standard fingerpicking grip when both the A and high E are “fingerpicked”?
3
Finger Picking Chords - Beats per bar