Which accidental continues through the bar?

Messiaen's Prelude for Organ (no opus number, discovered posthumously in 1997, composed probably circa 1929) is rife with ambiguous accidentals. Some can be figured out by examining similar passages, but two cases are particularly egregious:

In bar 59, alto, are the unmarked G noteheads flat or natural?
In bar 61, alto, is the last G sharp or natural?

Asked another way: at those chromatically altered unisons in soprano and alto, which accidental applies to which voice? Is there a rule for that? If we knew the alto's accidental, we could then let it continue for the later alto notes.

(Were the note heads (or the staves!) separate, with an accidental immediately preceding each, the confusion would vanish.)

Explanations from the musical text, from a facsimile edition if such exists, or from rules of notation outweigh reports that so-and-so played it in such-and-such a way. 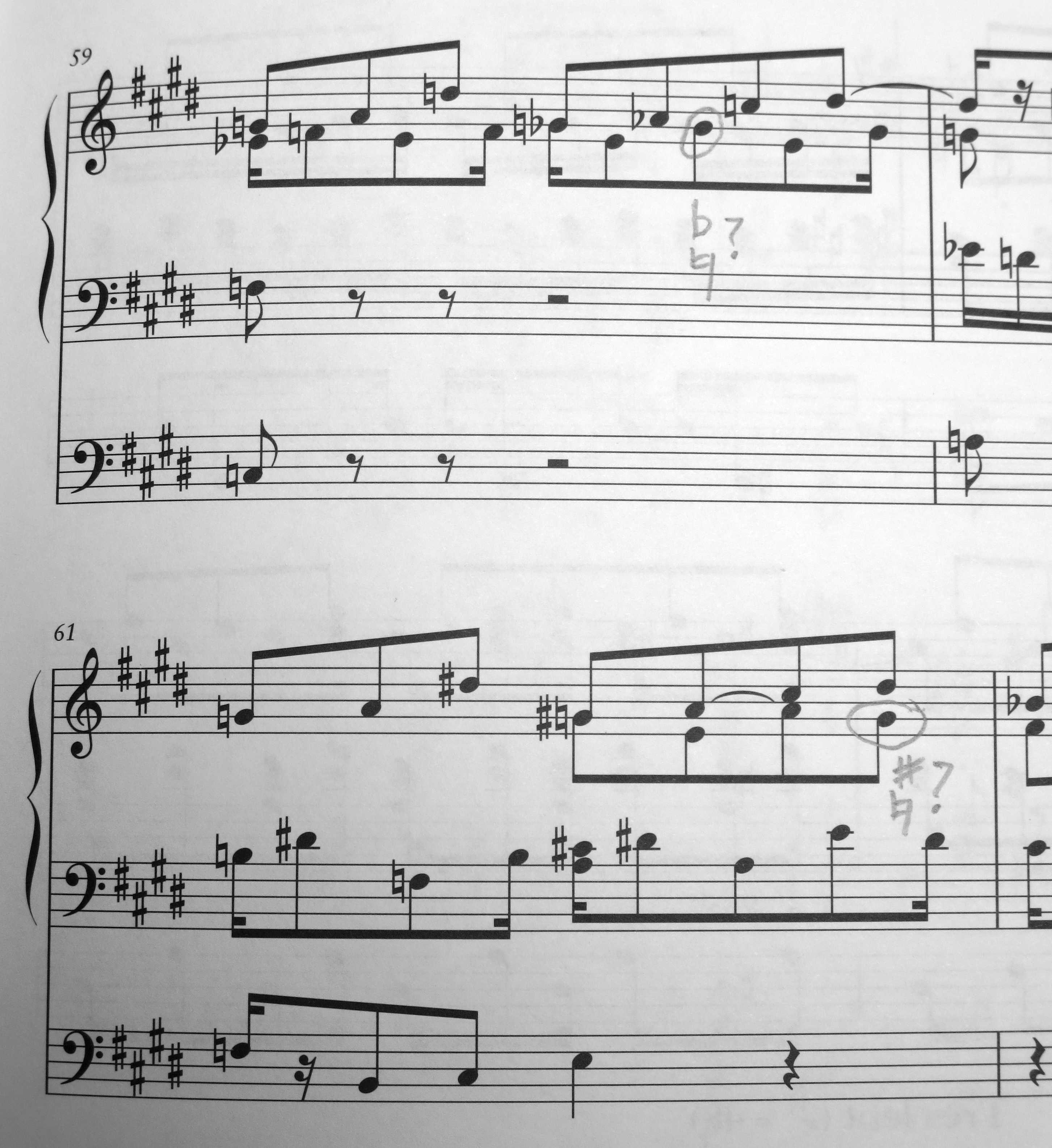 If you make the assumption that the voices don't cross, and that the accidentals apply to the voices individually, things seem to fall into place.

which has some logic to it.

Similarly in bar 61, if the upper voice is G sharp and the lower is G natural, the final G should be a natural, which repeats the D#-G tritone at the start of the bar.

Ideally, these details should be interpreted with reference to all the rest of the score, but we don't have that available. Messiaen's music is usually highly structured, so these passages are unlikely to be just "free atonal improvisation."

Gardner Read's "Music Notation," 2nd ed., pp. 73-74, covers how to stem and mark altered unisons. But it says nothing about the case at hand. All the examples use multiple note heads, to prevent ambiguity about which accidental applies to which voice. By forbidding a single notehead (even two-stemmed) with multiple accidentals, this avoids inventing a morass of rules such as "the first accidental applies to the upper voice."

So the published notation is rubbish. Even if the manuscript used this notation and the editor was too reverential to improve it, at least a footnote to that effect would have been justified!

Not the answer you're looking for? Browse other questions tagged notation accidentals organ or ask your own question.

6
Do accidentals last for the entire measure?

3
Accidental in Chopin Opus. 69 No. 2
37
Does an accidental apply to all octaves?
2
Meaning of double accidental
16
Basic Accidental Question
2
Scope of natural accidental inside a bar
3
Incorrect Placement of an Accidental?
7
Accidental in parenthesis (not courtesy)
3
Different accidental notations for the same key within the same measure