How to make my piece feel like a Presto

I am writing a piece in D major that I intend to be at a Presto tempo. This piece that I am writing, at first I intended for it to be a Scherzo. But it would be so short as a Scherzo and I didn't really notice much development. So after thinking about it for a while, I decided to expand it into Sonata Form. Here is an image I made to illustrate that expansion: 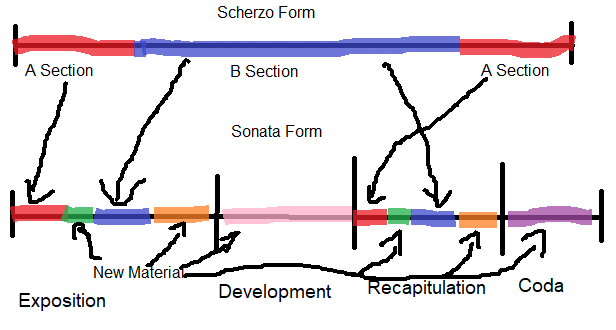 I have been told that my piece does not sound like a Presto, but rather, a fast Allegro. I am not one of those that just decides on the tempo and runs with it. No, when I write with a specific tempo in mind, I do several things to reinforce that tempo. In the case of Presto, I do this:

My D major piece is at quarter note = 190 BPM which is well within the range of Presto(some Haydn Prestos are as slow as 160 BPM and some Beethoven and Chopin Prestos are at 200+ BPM, which makes my 190 BPM on the fast side of Presto). And yet, people are telling me that, the way it is right now, Allegro Molto e Vivace would probably be a better tempo marking than Presto for my piece. I don't understand why though. Here is what I have so far of my piece:

Everything about my piece, the fast tempo, the Mozart inspiration, the Classical style, the solo piano instrumentation, all pointed towards a single type of accompaniment. That one being Alberti Bass as shown here:

So here is my question.

The answer is "harmonic rhythm".

Your piece has one chord change per bar throughout (except for bar 16).

That makes it sound like it's really an adagio at 48 BPM, except there are a lot of fast notes not going anywhere in particular.

In the Mozart, the longest chord changes are every half note, and in many places the harmony is changing every quarter or eighth note - and the rhythm of the changes never stays the same for long.

In addition to @guest's excellent suggestion of having a faster harmonic rhythm, I want to touch on a second suggestion which may seem counter-intuitive.

Paradoxically, increasing the number of 16th notes doesn't necessarily make music feel faster, and sometimes it can have the opposite effect of slowing the music down. For the music to feel fast, the downbeats at the barlines should come at a relatively fast pace. However, the more notes you stuff into a measure, the denser that music becomes, and the more there will be a tendency to slow it down, to get all the notes in (and even if your recording is at the higher speed, it will still sound like it should naturally be slower). By having sparser measures, it allows you to take them more quickly, leading to a faster overall downbeat, while retaining musicality. And it also makes the spots where you do have 16th notes stand out as all the more impressive. In the Mozart example, note how few 16th notes there actually are. Yes, little turns at the end of dotted notes, and a few touches of tremolo, and each of the violins has a few bars here and there of rapid scalar figuration. But the majority of the work is just in eighth notes, and some of the bars only have a single note. For comparison (though several decades earlier in musical history), see Bach's 4th Brandenburg, Mvt. III which is also Presto (and is in cut time), and is also written mostly with eighth notes as the fastest value, with the exception of some rapid violin figuration in a solo episode.

You can speed this up to prestissimo - ma non troppo (joke) but it won't be faster.

The answer is "harmonic rhythm" is only half the truth.

The point is, you are driving on the highway with pulled hand brake and on the wrong side:

The harmonization is unjust and not according to a classical piece like this one will be. Probably even 1625 D-Bm-Em-A7 might fit better in the first two bars.

Than bar 6 the melody is probably a V7 (c#,e,g) but the left hand accompaniment is D? and the next measure you're doing the opposite, is this planned? *)

It's not easy to find a good harmonization to your music, as a composition is more than a seria of scales and triads. To be sincere it sounds to me as probably my broken English must sound to you: weird.

*) Well, the best will be you say: It has to be like this and it has been planned this way. But to me it sounds quite funny not to say weird - rather neo-classic.

So to be short the problems I see in this piece are less concerning the speed and time but more the correct harmonization. But to give an answer to this too:

The left hand could accompany in half values (16th notes) or better in crotchets, but with full triads instead of the Alberti Bass, (this would give speed and acceleration) whereby you could try to keep a pedal note D) and as the advice that has been given already others: You could change the harmony! e.g. like this:

bar 5: here you might introduce an Alberti Bass in 16th:

than the same in G

What can we see:

the feeling of more speed is not only depending of the change of chords, also by the rhythm pattern and the change of this patterns.

Finally I'd like to add that a presto or any other tempo is not the time in it's self it is relativ to the tempo of the other sections. So if you play the previous section molto adagio the presto will be felt faster than allegro.

Mind that composing is more than arranging scales and triads. To me it means to tell something (maybe in a language that not everyone understands, but in a language whose grammar can be learnt and understood.

As the I-vi-ii-V7 progression is always better understood than a pedal note below the I-I-ii-V7 you can try this out too in the opening bars, with an Alberti Bass in 16th notes ;)

Well, as a picture shows more than 1000 words I'll try to load up the pdf of 2 solutions. I had still another idea: How about to transpose the modulated section in G an octava up? higher = faster? could be ... 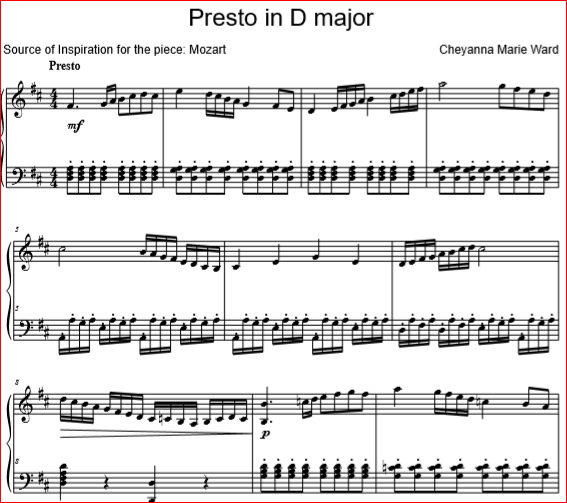 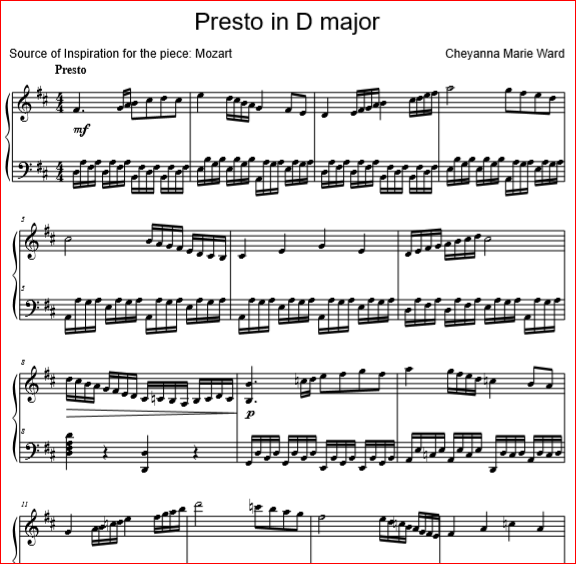 0
Playing super fast on the piano
2
Why does Presto always trip me up?
1
Able to play the right hand Presto on the first try?
15
What makes a piece sound like Beethoven?
1
Does Presto fit with a Minuet and Trio form?
9
Why is Beethoven's tempo so off?
2
What besides a fast tempo is causing this Measure - Beat equivalence?
0
Why does thinking in terms of eighth note beats help me to play at a Presto tempo?
2
Can a "divertimento" refer to a piece for just two instruments? (Piano and flute)