Having trouble with accidentals - Note-for-note vs traditional?

I am hoping to enter the music in the attached image into a midi sequencing program.

The problem I'm having is understanding the musical notation here. Traditionally, accidentals follow pretty basic rules, at least according to the wikipedia article on musical accidentals:

However, citing Kurt Stone, the wikipedia article also describes a more modern approach to accidentals that is said to be used in modern scores (of which the aforementioned music is an example) that has a different set of rules which provides some advantages of compactness in atonal music. I suspect these rules apply to the music I'm working on:

1 - Accidentals affect only those notes which they immediately precede.

2 - Accidentals are not repeated on tied notes unless the tie goes from line to line or page to page.

3 - Accidentals are not repeated for repeated notes unless one or more different pitches (or rests) intervene.

4 - If a sharp or flat pitch is followed directly by its natural form, a natural is used.

I'm hoping I can get some questions answered:

A) In the first instrument, the horns, at the top, why is there a natural (♮) on that first note in the bass? It's the very first note with no key signature, why do need to make it natural? Is this a courtesy accidental?

B) In the second instrument (oboes, clarinets, etc.) in the second measure has two sharps on each of those first two notes (presumably because they are separate instruments) and then no other accidentals for the rest of the measure. Does that mean the other notes are just C instead of C♯? Or are all those notes in that second measure C♯? This happens again in the third measure, which has a natural on the C an octave up.  Generally confused about which notes are C and which are C♯ here.

C) Referring again to the oboes/clarinets third measure, If we have one accidental, say a sharp on the low octave to make it C♯, then we have a natural on the C an octave higher for the next note, does that mean that any C after that natural is natural unless it specifically has an accidental?

D) To solidify my grasp on this, can someone confirm that I have the right notes for the oboes/clarinets instruments here:

I'd greatly appreciate any assistance in understanding the use of accidentals here.

To answer your specific questions:

These are almost certainly cautionary accidentals.

When several different parts are written on one staff, it is common to supply all the accidentals required for each part, because if the clarinet (for example) was playing from this sheet music, he/she would be paying more attention to his/her own notes than trying to read everything else as well.

There are many different conventions about adding cautionary accidentals, used by different music publishers and/or in different styles of music. Here are a selection of the options for cautionaries that are generated automatically in one computer notation program (and in total there are more than twenty different groups of options, not just the ones show below). 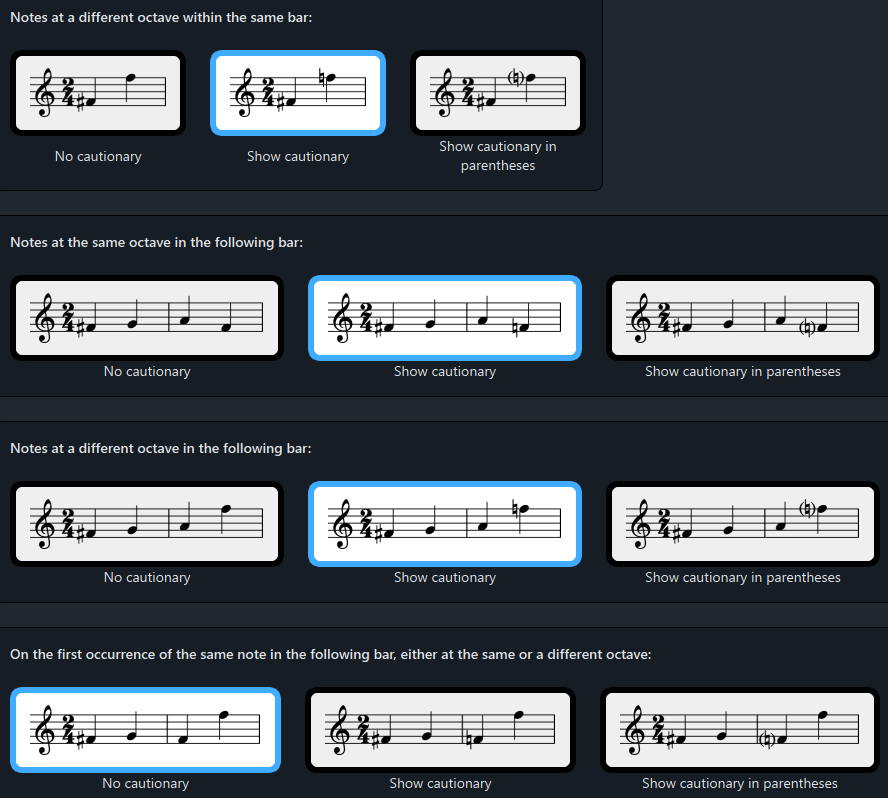 A) I think you're correct.

In your B), you write "In the second instrument (oboes, clarinets, etc.) in the second measure has two sharps on each of those first two notes (presumably because they are separate instruments)". This is correct. It's so that two players can read from the same part, and each player sees all the accidentals they need to see, even if they ignore the other player's notes.

As to the clarinets in b.2, all notes are indeed C♯ as your table says.

It is true that there are some needless accidentals. But I don't see this as evidence that the composer has adopted a modern practice of making each accidental apply only to the note it's next to. In any case, for b.2's last 6 notes to be C natural, the composer would have to not just adopt that modern practice but also go against Kurt Stone's rule 3 which you quote. The piano right hand shows a similar phenomenon -- repeated chords, but the accidentals are renewed only on the first chord after the bar line.

C) The natural on the high C does not affect the low Cs (C sharps). I expect that that natural is a courtesy accidental. (I think that if I were notating this, I'd choose to spell the C sharps as D flats, but perhaps there's some good reason to mix Cs and C sharps here.)

There are some situations where an accidental should be printed in front of a note regardless of whether it is sharp, flat, or natural. A couple of principles to consider:

Although one could write rules which unambiguously characterized every unnmarked note as altered or unaltered, I think it is more useful to recognize that in some cases an unmarked note won't be read reliably as either, thus necessitating an accidental in any case.

16
Can an accidental carry over to the next measure?
14
Small natural above C in G Major
9
What conventions are used with accidentals and tied notes?
7
Double- to single-sharp notation in lilypond - how to get rid of natural symbol?
2
Meaning of double accidental
20
Which accidental continues through the bar?
20
Scope of accidentals in measureless music
5
Can accidentals be seen as a temporary change in scale?
10
Does this accidental before an acciaccatura also apply to the main note?