When should a phrase-final long note be tied to a shorter note?

I note a common practice in vocal lines, where a phrase ends with a long note: in many cases such a note is written not to go up to a strong beat, but to extend a short way beyond that. For example it might be written as a note lasting a full bar, tied to a quaver/8th in the following bar.

Why do composers do that? Is it an attempt to make choir singers pronounce the final consonant more accurately together? If so, then that would not apply to songs for a solo singer, or to syllables that don't end in a consonant. So I suspect that there's an additional reason.

I ask so that I can learn when I should, or needn't, do it in songs I write.

Example of the end of one phrase and start of the next; first, without such a tie; second, with one. 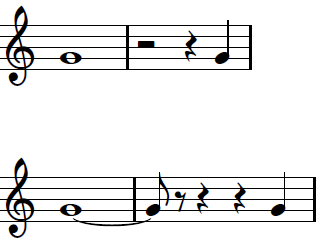 ETA: since posting this question I have found this answer. It responds to a question which is similar but not identical: it concerns only a work's final note, and the significance (if any) of rests between a final note and the final bar-line. My question concerns any phrase ending in a long note.

As you ask for singers and choirs it might depend of the ending consonant. Many amateur singers don't keep the whole note and give not the exact value. Normally it is up to the conductor to tell the members how long he wants the note exactly held. If you are conductor yourself I you can say the ending consonant has to be sung on the first eighth note. I thinks it on the seconde it might disturbing the new phrase of the accompaniment or the soloist.

As you say you want to know this as a writer it is up to you what you want to have performed if you have a clear concept where it should end. But it will be up to the conductor to tell the singers where he wants the final consonant pronounced together.

This depends on the style of music you are writing, and the corresponding performance practices.

I'm more familiar with instrumental music than vocal, but the same basic idea applies to both.

If you write a phrase that is followed by a rest, performers will tend to make the last note shorter than its written duration, whether or not the there is a slur ending on the last note.

For an orchestra violin section, for example, the fact that each player will stop playing at a slightly different point in time doesn't matter, in many situations. For a choir singing a word ending with a consonant, it matters a lot that everybody stops together.

If a piece with fairly simple rhythms is performed with a conductor, of course the conductor can indicate visually exactly when to stop, but there is a practical limit to how many gestures a conductor can make when directing a larger scale work.

This notation convention is very common in scores for TV and film music, where everybody (often including the conductor!) is sight reading the music during the recording session, time is money and rehearsal time is "wasted money", and the performers all know what the notation means without any explanation.

The other answer you linked to is essentially the same, except the other question was only about the final note of a piece (which of course is not usually followed by a rest, if this notation convention isn't used) and the idea that the release of the note is accented doesn't necessarily apply.

Of course a consonant at the end of a note is inevitably a sort of accent, but in vocal music you don't necessarily want it to be a big accent, and the best way to make it unobtrusive is for everybody to pronounce it together.

Not the answer you're looking for? Browse other questions tagged notation songwriting choir or ask your own question.

7
Sources for sight-reading exercises that focus on subdivisions (emphasis on drums)
3
Is it common in song structure for a “Bridge” to be shorter than the verses?
0
Is the note after a tied note in that same voice always legato?
6
Should a lyrics extension line (underscore) be used on tied notes?
3
When to use tied notes vs. an unconnected “laissez vibrer” (l.v.) tie?
1
Should articulations on a tied note be placed on the first or last note?
6
Is there a musical difference between a work ending with a whole note and one ending with a whole note tied to an eighth?
0
Am I notating this 2 layered staccato right?
3
What does tying an acciaccatura to the principal note with a slur imply?
8
Are these chords tied (not played again) or is only the top note tied?