Not sure I'm interpreting your question correctly, but you seem to be asking about about the mathematical relationship between the frequency (Hz) of a pitch and the sequences of pitches that we organize into scales and octaves.

So at the risk of being too pedantic, we map frequencies to pitches using a logarithmic scale (in base 2).

Because our ears don't perceive pitch distance linearly with frequency, as the wikipedia article for "12-tone equal temperament" says:

the ratios of the frequencies of any adjacent pair of notes is the same, and, as pitch is perceived roughly as the logarithm of frequency, equal perceived "distance" from every note to its nearest neighbor.

So to answer your question, an octave is a unit of frequency used with logarithm base-2. (A semitone is one twelfth of an octave. A cent is one hundredth of a semitone.) The "series" of octaves itself would just be referred to as a base-2 logarithmic scale.

If I understand your question right these are the names of the different octavas: 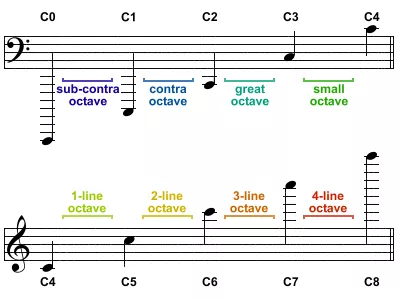 Not the answer you're looking for? Browse other questions tagged harmonics frequency or ask your own question.

4
How often does each interval appear in the harmonic series (relative to the fundamental)?
13
How does the harmonic series affect consonance?
4
What do the ratios of the partials in inharmonic spectra deviate from?
1
How to understand a minor chord using the harmonic series?
7
In a musical note (A for an example) are all the other frequencies harmonic?
20
Speed of playing notes in different octaves
15
Can the harmonic series explain the origin of the major scale?
4
Do accidental notes have their own name?
44
Does the difference in harmonic series between instruments have a significant effect on the consonance of the sound?
4
How do polyphonic pitch-shifting algorithms handle doubled/tripled octaves?