Why is more music written in sharp keys than flat keys?

According to The Most Popular Keys of All Music on Spotify, an analysis of their song library, sharp keys are more common than flat keys. 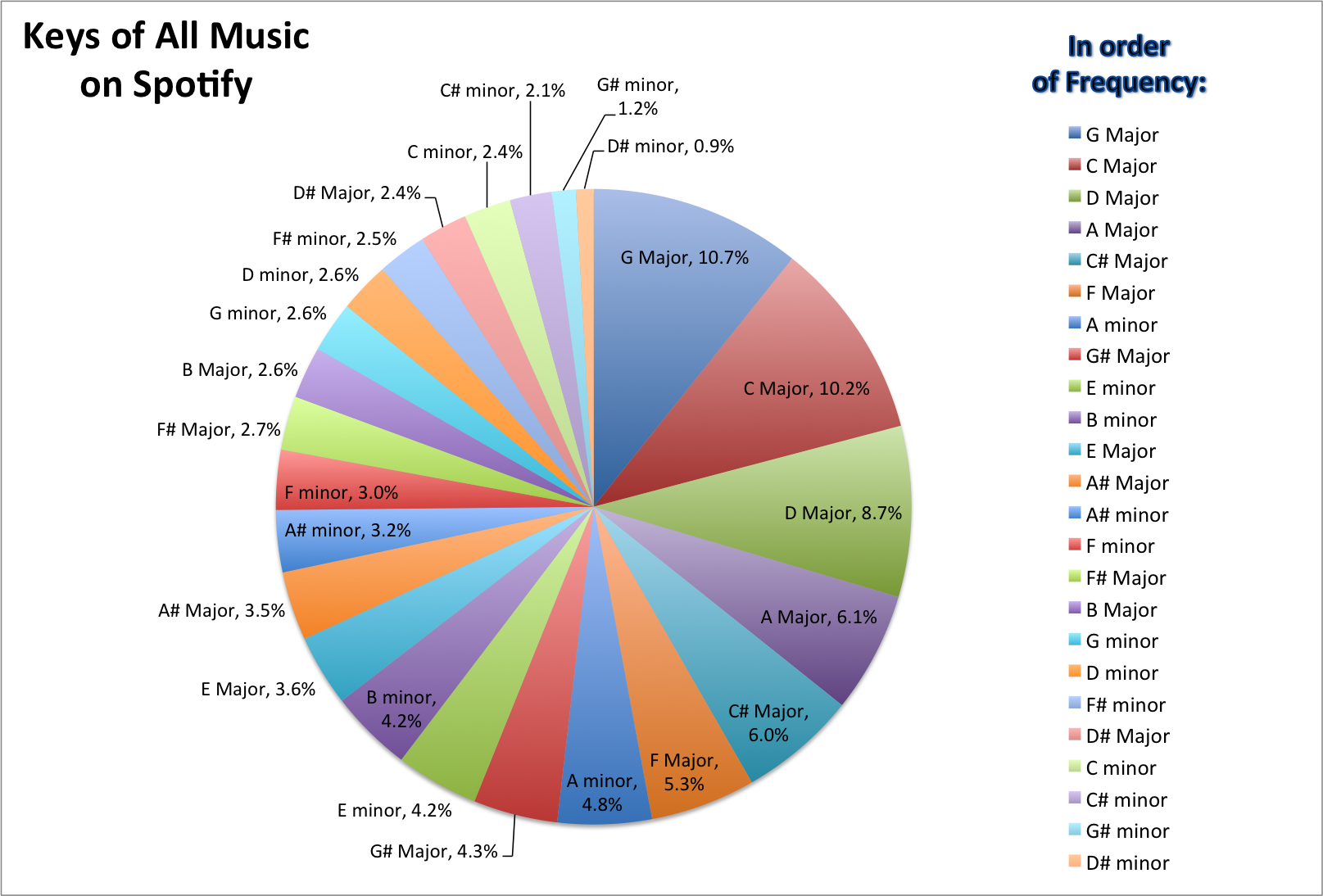 It's an artifact of Spotify's analysis. Notice that this chart shows no songs written in a flat key. Therefore, without a doubt, the chart is simply using "F♯" to mean "F♯ or G♭," "A♯" to mean "A♯ or B♭," and so forth.

While there are certainly questions about how all of this data was classified, it's not surprising to me that the most popular keys tend slightly toward the sharp side (G, D, and A), with flat keys like F and B-flat ("A-sharp") turning up with smaller percentages.

I assume much of Spotify's catalog is popular music. Guitars and electric basses are rather dominant instruments there, which tend to be biased slightly toward sharp keys like G, D, and A in their typical tunings. (That is, it is often somewhat easier for beginners to play the basic notes and chords in these keys, due to more open strings and the use of only the first few frets.) Obviously keys near to C major on the circle of fifths are also relatively easy to play on piano/keyboard, another central instrument in pop music.

That leaves the mystery of why C#/D-flat and G#/A-flat are also ranked somewhat highly after the central keys of C, G, D, and A. My immediate question is how Spotify determined the key for songs that have more than one key. If they looked at the final key, many pop songs contain a final modulation that moves up by a half step, which would take C and G to D-flat and A-flat. That's speculation, but one potential explanation. (Of course, I'm putting a lot of faith that Spotify's key-finding algorithm is accurate, which it may not be.)

But why the most popular keys tend toward the slightly sharper side seems clear: they work reasonably well on both guitar and piano.

At least it's not like some guitar sites, which eschew flats altogether, and only live in a world of sharps!

To answer the question posed in the title, I have noticed three things that gently influence the choice of key.

I don't have authoritative sources to confirm this - it is just my opinion.

Firstly, the data is presented in such a way that it is difficult to see if what they are alleging is true. Secondly, they have no key signatures with flats in their names. I'll give them a pass on six sharps (though this could be just as well written as six flats) but A# major is ridiculous.

I've tabulated the data below. it totals up to 99.8%. I'm not sure if that's my maths or their rounding error. I've totalled up the cases for up to 5 sharps or flats. The cases 0 sharps/flats and 6 sharps/flats do not belong to either the sharp key or flat key category.

The bias is, as noted in the article itself, probably due to the instruments used. Older music with wind and brass may favour flat keys, but Spotify will contain a lot of guitar music, and guitar is a little easier to play in sharp keys, particularly in major.

On guitar Amaj, Emaj and Dmaj are among the easiest chords to play. The Relative minors F#m, C#m and Bm are all barre chords however. I think this explains why the bias towards sharp keys occurs only in major but not in minor. For playing in Am/Cmaj the chords Am, Em and Dm are also easy, and there are other easy chord shapes for Cmaj and Gmaj (but Fmaj requires a barre, which can be avoided by playing in the key of Gmaj instead of Cmaj.) There are many songs written for guitar that only work with open string chords, not barre chords, and therefore often can only be played as intended in the key of Gmaj or Amaj for example.

In many contexts which describe audio pitches, it is common to use the names "C C# D D# E F F# G G# A A# B" [except in German, where the last three notes would be "A B H"]. The chart is most likely produced by processing the songs, identifying the apparent key note and primary tonality, and then determining the pitch of the key note using the above names. Listening to a piece of music, it would be impossible to distinguish between B and Cb, F# and Gb, or C# and Db, or between the associated pairs of relative minor keys. Using A# to refer to Bb may seem unusual, but it helps to make clear that the chart is only identifying the audio pitches associated with the key notes, rather than making any judgment as to how they are written.

Aside from the notational issue of "no flat keys," the data as presented isn't consistent with common sense.

There are only a handful of classical pieces in D sharp minor in the entire repertoire (I challenge anyone to name more than five), and nobody is likely to write anything for guitar in either D sharp or E flat minor, so Spotify's claim that almost 1 in 100 pieces is in that key is simply unbelievable.

More likely, there are about 1 in 100 pieces that are in either D minor or E minor, but were not played at A=440 pitch, and Spotify's software mislabelled them.

Since there is no reason to believe the other groups are any more accurate, the whole chart is a work of fiction unless somebody can prove otherwise.

Not the answer you're looking for? Browse other questions tagged theory key-signatures or ask your own question.

26
How many (major and minor) keys are there? Why?
25
Why is music for strings more likely to be in keys with sharps?
24
Are sharp keys “bright” and flat keys “dark”?
5
Is it possible that a music piece written in a “flat key signature” contains sharp-accidentals (and vice versa)?
13
Why have I never found any music written in the key of C Sharp Major?
2
Why is F sharp the only sharp Major Diatonic Harmonica offered and why is there no G flat harmonica?
1
Why do parallel keys matter?