Augmented triad in Pathetique Sonata? How does it function?

I analyzed the harmony of the Pathetique Sonata as you already know, but one thing about the harmony in the first movement made me curious. No, not unconfirmed modulation or anything like that. No, it has to do with a single chord that I found in the third theme of the exposition. Here is an excerpt containing that chord and clarifying the key the passage is in: 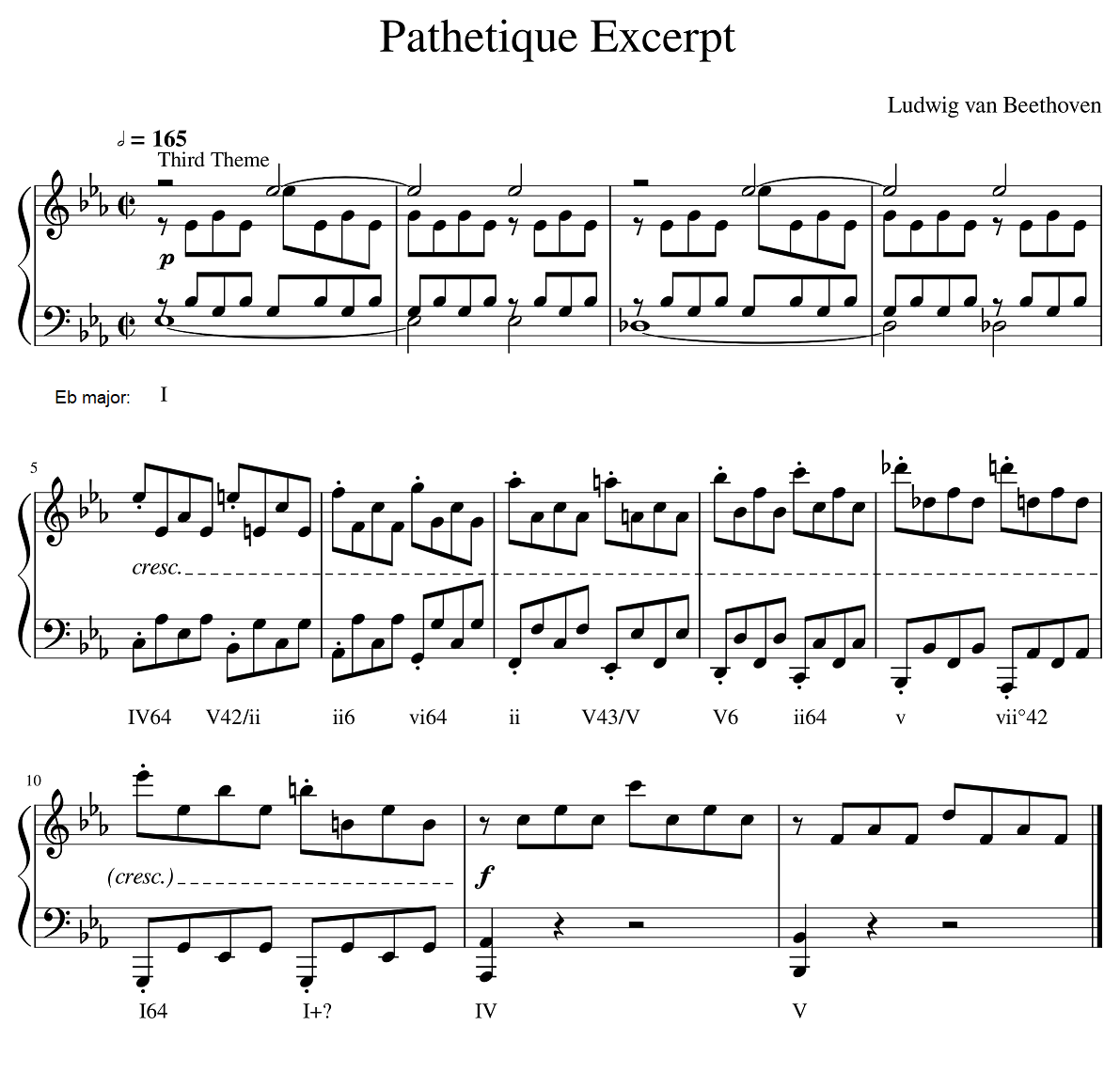 You see it? It is this chord here: 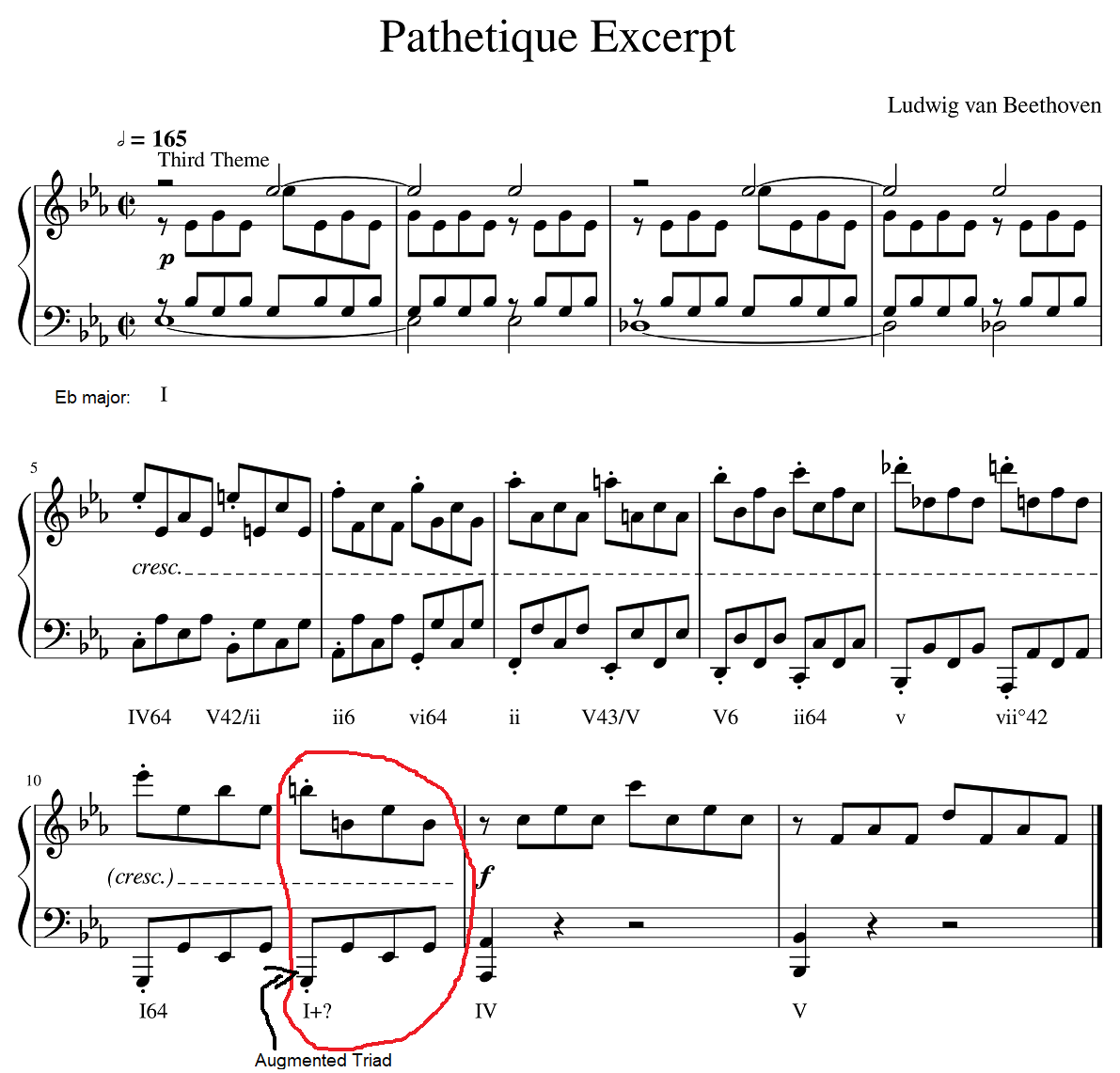 An augmented triad. I have seen this triad crop up a few times in my analyses, usually as part of a passing motion in the melody. Here, though, it seems to be playing a more cadential role. Why? Well, look at the chords before and after the augmented triad:

I64, IV, and V are all chords very typical to see at a cadence. If you look at just the bass notes, you get something very familiar, a downward minor scale going to scale degree 5. This is often used as the bass line of a common idiom known as the lament bass. But the passage in question is in Eb major, the relative major of C minor, the scale that shows up in the bass notes. Also, usually the lament bass starts on tonic. Here, a supposed lament bass starts on a second inversion subdominant chord. So the bass progression isn't the whole story.

Now, if you expand your view to the Alberti Bass as a whole, you soon realize that there is no lament bass. If anything, the chord progression is closer to the Circle of Fifths progression than anything else. But this still doesn't explain what the augmented triad is doing. Here is my speculation as to what it is doing.

I speculate that because the augmented triad has a B natural, it is bringing back C minor for just a second before the IV chord arrives. Note how the right hand in the next bar after the augmented triad is playing notes of the C minor chord. With the bass being Ab though, it can't be C minor(unless Beethoven wrote this bit to be polytonal(which I seriously doubt)). Also, there being no G really weakens the C minor possibility.

But is that in fact what the augmented triad is doing is bringing back C minor for just a second, thus acting like III+ in C minor and not I+ in Eb major? Or is it acting more like V+, leading into the IV chord with 2 leading tones, the G leading to Ab and the B leading to C? In other words, how is the augmented triad functioning in this passage?

Bar ten's first half is I6. Its second half is also I6, but with the B natural acting as a passing tone from Bb to C, or as something like an inverted appoggiatura or cambiata if you consider the melody to be Eb - Bnat - C. There's no need to invoke obscure harmony; melody explains it enough.

Augmented triad is symmetric, so it pulls towards C the same much as it does towards Ab or E. I would agree with your interpretation that it is a secondary dominant (Eb+) to the following IV chord (Ab).

Not the answer you're looking for? Browse other questions tagged harmony analysis beethoven sonata or ask your own question.

5
How to analyze a chord from Beethoven sonata no 8 (Pathetique)
3
Why does VII have dominant function in natural minor
4
Chromatic 7th chords going upwards in Beethoven
1
Why do I hear a major key lament bass in Bach's Chaconne in D minor?
2
Non-cadential use of 6/4 chord
5
How should I analyze this passage? As vii°7, V7, or both?
1
Using an augmented chord to modulate to a distant key, will this work?
4
Diminished seventh spelling but functioning as an Augmented Sixth?
2
Four part writing: How to voice augmented 6th chords?