Features of a Coda section

I came across a question in a music theory book, which asked about explaining why bars 30-36 in the following music extract could be considered as a Coda.

The extract is from Prelude in C minor by Gounod. 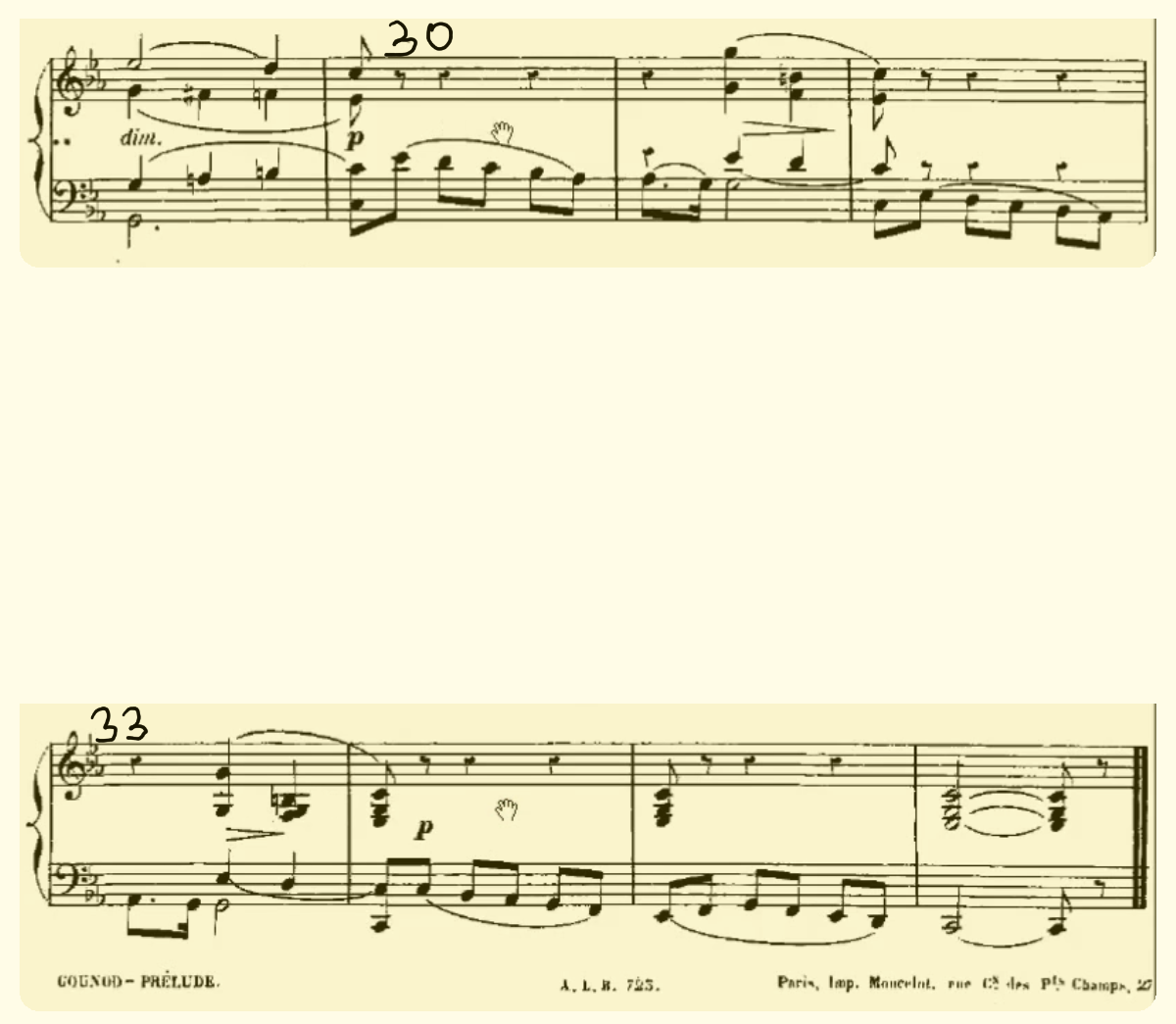 I want to know what features in a music section are present, for it to be called a Coda? Especially since there is no use of the Coda symbol. How could I identify a section to be a Coda without the symbol, by just understanding the characteristics of that music section?

Also, I came across the word codetta, which I haven't come across before. Could anyone explain this too?

Coda means tail, ending. Most pieces will (obviously) have an ending, and it's usually the point where the music comes down to its final resting place - using a cadence that indicates this.

Here, there's a perfect cadence (V>I) so it feels like it's the ending. A coda is often a separate part of a piece, several bars long, that gets played after repeats etc. have been played, thus DS al Coda markings in pieces. Meaning go back, play some of the previous, then at the sign jump straight to the coda for an ending.

This piece, presumably has no DS/DC, but the last few bars could well be the ending. After all, there's a double bar line shown. And it ends on a root harmony.

Codas are separate-sounding ends of pieces. They are generally found in more sectional pieces like sonata-allegros, ternary-form pieces, rondos, and even theme and variations. They are generally split off from the rest of the piece by a perfect (a.k.a. authentic) cadence. They also do not tend to precisely mirror any earlier sections (unlike the rest of the piece). Combine what these last two sentences present and you can detect where codas are using them.

For example, when analyzing a ternary-form piece and finding it is structured like ABAC, the coda is the C section.

Codettas are like codas, except they are found at the end of earlier sections instead of the entire piece. They are also generally shorter than codas. I don't think I've seen the word "codetta" in any context other than the end of the exposition of a sonata-allegro, though.

If this should be a coda some how you could interpret each final group as a coda: repeating the same chords V-I, the same motif - only in different octaves like your example).

But what does it matter ... except as a help to the members of an ensemble as orientation from where to start in a practice hour? Surely not to the audience! So this question seems to me rather a kind of nitpicking in a theory exam of analysis of the form.

( A coda in my understanding can also contain quite different material.)

Codetta is the diminutive of coda: so it will be a small coda.

* Other articles where Codetta is discussed: coda: A codetta (“little coda”) is a brief conclusion, a dominant–tonic cadence at the end of the exposition that may be repeated several times for emphasis.*

In general, a coda is merely a concluding section of a piece. When a coda sign is used, it's often just a section that is not part of previous repeats and only occurs once at the very end of the piece. A coda in that sense does not necessarily have any distinguishing or specific features other than being labeled as the final section.

However, as other answers have mentioned, a coda in classical and most romantic era compositions is a separate section of the form of a piece or movement. The most basic definition is that a coda is whatever comes after all the required parts of a particular form (including any repetitions that are part of the form of a particular movement) are complete. Thus, if a piece is in ABA form, a coda is anything that comes after all the A material is repeated in the second A section. If a piece is in sonata form, a coda is anything that comes after the recapitulation does everything that happened in the exposition (with transpositions, etc. as necessary). If a piece is in a ABACBA rondo, the coda is everything after the final A section is repeated. And so forth.

In that formal sense, a coda can contain a lot of different sorts of features and be of varying length. In some pieces, a coda may be nothing more than a final chord tacked on to repeat the tonic after the final section of the form is complete. In other pieces, a coda may simply be a few bursts of repetitions of part of the final theme of a piece, often repeating the final cadence. In other examples, codas may contain reworking of earlier themes, or they may contain completely new material. And in more extreme examples (starting with trends around the time of Beethoven), codas can become completely separate large sections of music that provide an additional culmination. Beethoven's codas could easily stretch to 1/4 or 1/3 of an entire movement, but as they fall after the standard form (like a sonata form, etc.) sections are complete, they are generally labeled "codas."

Beyond saying that these "formal codas" are after all the "required" sections of the form are complete, there's not a lot that's predictable about their style or structure, particularly in the romantic period and beyond. The only way to find them is to look through the entire form, figure out when the standard form sections are complete (usually at a perfect authentic cadence, but in larger movements there may be several PACs in the closing section before the coda begins), and then label the "coda" as the last section after all others have been completed. (I will disagree with previous answers: while many codas sound like separate sections, others tend to blend in and merely sound like an extension of the previous section, only it's a new section that wasn't part of the form before.)

However, there are more general stylistic attributes for very short coda sections, as in the example provided in the question. Short codas generally follow an authentic cadence and tend to be repetitive. In a loud boisterous movement, they may simply repeat stereotypical cadences again and again, or they may have short "closing" themes that tend to have repetitive motives and lead to strong cadences. In a softer or slower movement, short codas tend to "wind things down," again often with repetition.

The latter is what you seem to have here, with a strong PAC to the downbeat of bar 30 that ends the primary melody. That is followed by repeated melodic descending motives that each culminate in a repetition of the V-I cadential progression (downbeats of mm. 32 and 34). The last couple bars stress the tonic chord arrival through repetition. Overall, the repetition, gradual slowing of motion, repetition of simple cadence-like progressions, and "fade-out" qualities make this a pretty stereotypical slow/soft piece coda.

As for the term codetta, the features I just described are actually more typical of codettas in longer pieces than actual codas. A codetta is a unit that happens after a concluding PAC (or at least an authentic cadence in romantic period or later music) for a large unit of form. It usually contains the stereotypical repetition of cadential gestures I mentioned in the couple previous paragraphs. Some theories of music (notably following William Caplin) tend to label each individual repetition as a "codetta," so Caplin might say that the piece in the question has a coda composed of 2-3 codettas. Other theories of form just label the whole section after the big PAC in a form as a "codetta."

So, for example, a large sonata-form movement could conclude its exposition with a big PAC followed by a codetta (or codettas, if you follow Caplin) which is a bunch of repeated short phrases or gestures that keep concluding with V-I in the local key. The recapitulation typically would repeat all of that, thereby having its own codetta. Then, if the composer chooses, after all the material of the exposition has been repeated in the recap, the piece could move on to a true coda, which may or may not have other material.

Part of the problem with this terminology is that it hasn't been used consistently for analysis. In some cases, "coda" has a strictly formal definition, regardless of what happens within the coda musically. In other cases, "coda" is used to represent certain types of "wrapping up" features that are stereotypical in classical pieces, which other analysts might also conflate with "codettas." It seems the textbook the question is drawn from is asking about the latter implication of the word "coda."

Tim's and Dekkadeci's answers explains correctly what a coda is, but to add: the coda symbol is more of a way to shorten the length of the score by omitting the "da capo" repeated part (traditionally) or some other repeated section. It doesn't necessarily have anything to do with the "actual" coda, as part of the structure of the piece.

Not the answer you're looking for? Browse other questions tagged theory piano analysis coda or ask your own question.

1
George Russell Lydian chromatic concept
5
The meaning of Coda
16
“The intervals considered dissonant have changed since the 'Middle Ages'”; How so?
2
Piano playing matching pitch of spoken voice - is there a name for this?
1
Slash chords and notation for A/C (according to Haunschild Book)
0
F Dm Am C (Lydian?) Progression
3
“D.S., D.S. Al Coda, To Coda” Confusion
2
Development section in a fugue
8
Is this an example of a coda in jazz? Can you find more examples?
4
Analysis of a section