How would this chord from "I'll See You In My Dreams" best be analyzed?

In the song "I'll See You In My Dreams", there is a chord progression that I really love. I'm wondering if there is a "best" way to analyze one of the chords.

The song is in the key of F Major, and the chorus has a chord progression that goes: D7 A7 Dm Bb Bbm F

The melody line over the D7 chord is Eb-D-C-A, which are notes from G minor, leading me to further think that V/ii might be a good analysis.

I'd like to hear any thoughts anyone has on this. Thanks in advance!

Link to the song (this progression occurs at 1:30):

I'll agree with piiperi's answer that the surprise is the A7 chord (as OP suggested in the failure of the D7 to resolve properly), but otherwise I'd analyze the whole thing a bit differently. In particular, I'd say the A7 is actually what makes the song interesting -- what raised it from the pedestrian and turned it into a jazz standard. Perhaps not that specific chord (as different arrangements of this song do it a little differently), but the harmonic surprise in that moment.

This is a pretty standard 32-bar chorus with a half cadence at the end of bar 16. (See the lead sheet in dmb's answer.) I bring that up because the lead-up to the half cadence is through D7 to G7 to C7. Very typical circle-of-fifths motion.

That creates an expectation that the final cadence may follow a similar pattern (as it does in a multitude of songs). When the D7 (actually a D7b9) arrives midway through the second phrase, most listeners will expect to somehow go through D7 to G7 to C7 to F and conclude. That would be the standard "boring" way to end this song.

And the melody hints at first that it's trying to do that. Starting at the D7, we begin a melodic sequence: Eb-D-C is mirrored with A-G-F in the next two bars. If this were a boring normal song, you might harmonize this with D7b9 under the Eb-D-C, then some sort of G9 under A-G-F to make a nice circle-of-fifths sequence. Then the melody might continue down to finish off the 8 bars something like:

That would create a very standard circle of fifths motion that would parallel what happened in the first half of the chorus. (Note those aren't the most inventive chord choices: just trying to show the basic outline of the progression.)

But that would be like any run-of-the-mill song. Isham Jones was brighter than that, though. He decided to make this ending interesting. So instead of a standard circle-of-fifths turnaround, he must have thought, "Hey, let's bring back the opening motive to make a less standard approach to the cadence." And that's what you see in the final four bars. The opening melodic motive returns (D-F-G-A), except here it finally resolves down to the F tonic.

Well, it's obvious that you can't put that D-F-G-A motive over a standard dominant chord. You also likely would want to hint back to the opening harmony too. So now you have a question: how to get back to that IV chord for the opening motive?

And the answer is by failing to fulfill expectations. You set up the D7 chord, as would be expected at that point in the chorus (again, mirroring the first half of the chorus), and you even enhance it with a flat-9 addition to give it extra punch. It's clearly meant to sound like V7/ii. That would be the obvious chord at that point, and any listener who has heard a hundred jazz songs of that time would find that normal.

But then, Jones throws you for a loop. You have what sounds like a potential melodic sequence (as though you wanted to continue to G7), but instead there is a reharmonization with V/vi to vi. Why? Because it needs to go to IV to set up the opening motive before the final cadence. The harmony leads very well into that. (Note that the original Jones version is actually an even weirder more disruptive progression at that point, but overall it's trying to lead you back to the IV chord so the opening motive can come in.)

The power of dominant seventh chords is that they can pull you any which way, and they can turn on a dime. In this era of jazz and Tin Pan Alley, songs do this all over the place. You don't need to hear the resolution of the dominant seventh to feel the "pull" as dominant. The D7 wants to go to G, but instead of hearing that, you get a new dominant seventh A7 which immediately reorients your ear. The descending G-F as the A7 resolves to D makes such a strong resolution that you soon don't care how you got there. And it sets you up for the final gesture, which mirrors the opening of the chorus.

To my ear, that A7 isn't "duct tape" -- it's the most interesting progression of the entire song. It's the moment when your ear perks up and says, "Woah! What's gonna happen now?!" And the answer is a great final bookend to the chorus.

Could you lead into that A7 more smoothly? Of course. But then it wouldn't have the punch. (And again, note the original versions linked above from Isham Jones in 1924, which have an even stronger denial of the D7 chord's implication.) Composition is about setting up expectations for a listener and then either fulfilling or denying them. When that D7b9 arrives, I guarantee you that most listeners of music at this time would "check out" and say, "Oh, I know how it's going to end. Standard circle of fifths." Except it doesn't.

IMO the weird thing about it is not the D7, but the A7. It's clearly going to do a run-of-the-mill Cm6/A - D7 - Gm or G ... but instead of the expected G-based chord, it gives you an A7?? Why... to make an awkward transition to the Dm. I think that's the freaky part, like a third arm on a beauty queen. Maybe the composer or arranger ran out of time, they had a nice-sounding first half up to the D7, and then a nice-sounding last half from the Dm onwards, but they couldn't figure out a way to actually make the parts fit so they just used duct tape and superglue. That's my analysis.

There, I fixed it

If it's the Eb note thing you're not familiar with, it's a very common trick. You know about secondary dominants and you noticed the D7 chord, which would naturally resolve to a G-based chord. The Cm chord there is like a booster rocket for the D7. Secondary dominant on steroids. Secondary subdominant?? That's probably not even a term, I made that up. You know, D7 - Gm would be sort of like pretending for a while that we're in the key of Gm instead of the Dm. It gives some modulation-like vibes. Some people call that "borrowing". What else is there in Gm ... there's Cm! Cm - D7 - Gm would be a very characteristic progression in Gm. And if you want to make the booster rocket even stronger, you make it a minor sixth with the sixth in the bass, A. That way you get more circle-of-fifths/fourths movement, A - D - G. But it's just a short excursion, we haven't really forgotten where home used to be, so an A7 easily gets us back home to Dm. Or at least that's how it should stereotypically go, and that's what my fixed version does.

First off - the song is actually Isham Jones (lyrics Gus Kahn) and the song is a "jazz standard", and a stalwart of the gypsy jazz world (there are a heap of versions by Django and just about every guitarist in that genre knows it).

It dates from 1923, and it is not unusual to see clever and creative chord sequences that don't follow the "usual" analysis in this period. (Think of "Body and Soul" and "Stardust" among many.) This is the start of the absolute golden era of American popular song writing, many agree.

You don't have to be surprised in this era that everything isn't always "cycle of fifths". They loved their dominant harmony, but very often would go off in an unexpected direction to give texture and originality to the song. For purpose of analysis, I would actually see the 8 bars starting with the D7 as being generally in D, but it begins on a dominant harmony, and then simply surprises you by going (via A7) back to the relative D-. it's major-minor, if you will.

What this unexpected false-cadence to the minor does is give a strong feeling that we are headed to the end cadence (good old IV followed by IV-, some versions give the Bdim instead). It also contrasts the second half of the song nicely with the first half (which does follow the cycle as expected - wouldn't it be a drag if the two halves were the same?)

If you look into songs like After You've Gone, Out Of Nowhere and so on you will see this kind of thing happen plenty. Here's one from the opening of Hoagy Carmichael's "Georgia" (written here in C)

See? I to III7 makes you think we are going to roll around the old cycle track - but Hoagy is better than that. He takes us back where we don't expect (in this case again via relative minor), why? Because it sounds great and makes the song a bit different. It seems to have worked.

These guys and girls really knew their game. They often took their cue from the great romantic composers, and they knew how to be original and musical without being deliberately odd or "different" sounding. Often the way they did it was so artful that you don't even notice until you really study the song. It's just there.

Just because songs sometime can be analysed as cycle of fifths, doesn't mean they have to be.

(By the way I never heard this rather tender down tempo version before -I like it. Nice to hear the verse.)

EDIT : below is a scan of the lead sheet from the well worn Django Fake Book, the only chart I can find. (I think the song is PD now.) 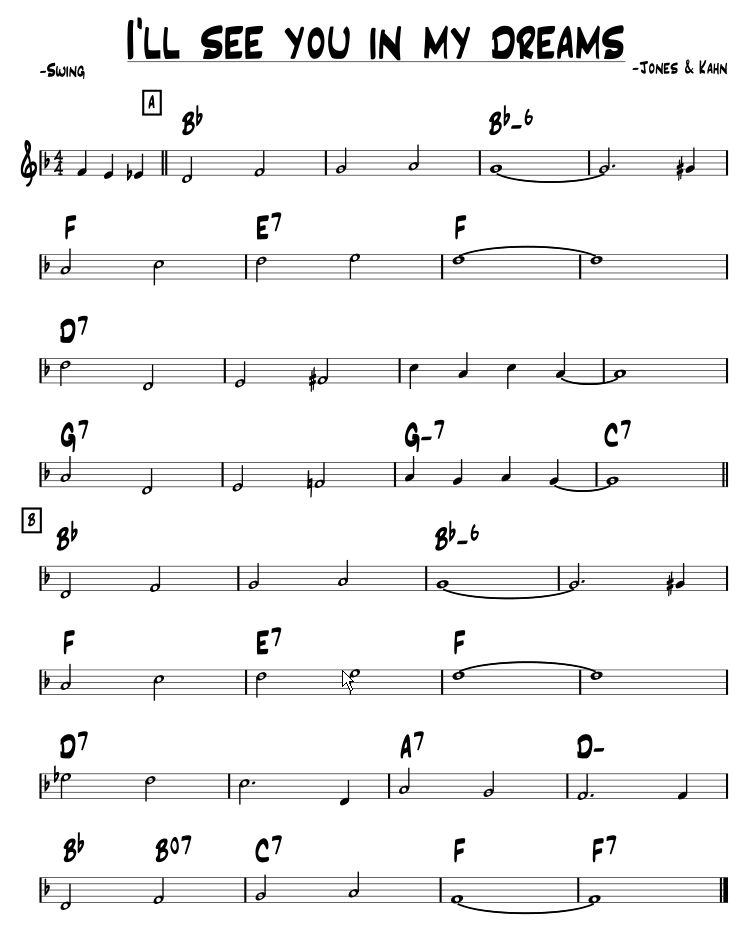 Not the answer you're looking for? Browse other questions tagged chords harmony chord-progressions chromatic or ask your own question.