Reading the book The creative development or f Johann Sebastian Bach I happen to come across the term figure-work when the author analyzes pieces by the great musician.

Figure (ii) A short melodic idea having a particular identity of rhythm and contour, often used repetitively or in conjunction with other such ideas to build a larger melodic idea or a theme. Thus it belongs to the category of musical ideas commonly called motifs ( see Motif ). Melodies that have florid motivic detail are sometimes said to be figurative, and the use of the term in this sense is related to the Italian canto figurato : see Analysis §II 2. . Certain musical figures in Renaissance and Baroque vocal music were seen as analogous

It seems to me a figure is usually about one beat in length, although the figure make overlap two beats as a kind of anacrusis.

Figuration is discussed in this dissertation: Callahan, Techniques of Keyboard Improvization... This illustration is a nice example of some common musical figures with their German names: 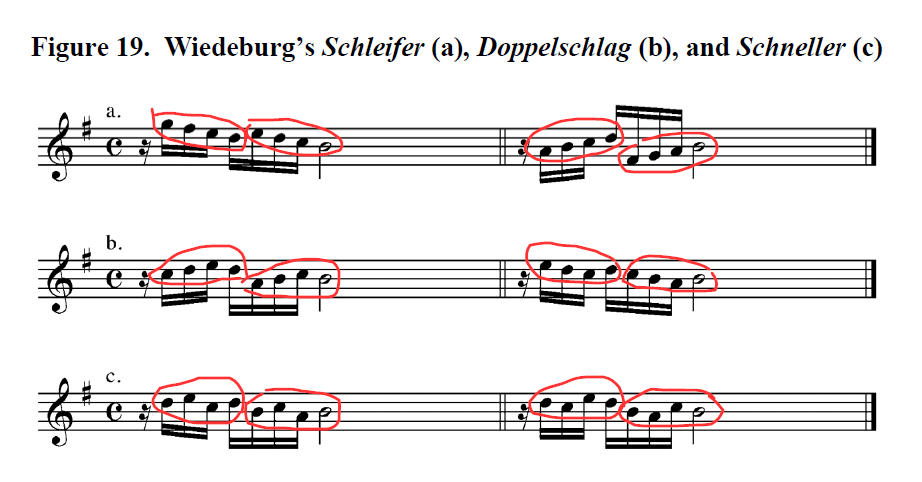 In the Callahan dissertation he talks about elaboratio (harmonic/voice leading framework) and decoratio embellishment of the framework with decorative figures. In that perspective the figures are applied to a given complete - but abstract - musical structure.

From the concatenation perspective, figures are connected sequentially like links of a chain to for a melody. Sometimes this is called "spinning out." The German term for it is fortspinnung. As I understand it, this is more about free flowing development with figures rather than conforming to a pre-set structure as in the embellishment model.

I've been struggling for weeks now about the English term "figur". It's everyday meaning seems to be the same as "number".

But in German figur is also meaning the shape and movement in the counterpoint or descant. Now the longer the more I get convinced that my understanding was correct: "Figured bass" stood originally for the embellished and decorated figures or melodic variations of a simple note against note counterpoint - so in opposite or contrast to this latter choral-like setting. But through the years it became the meaning of "figured bass" that means thorough bass and the figured stands for the numbers.

I poste this here broadly hoping we'll get other resources that might proof that I am wrong.

So to your question: What is meant by figured works?

Some will answer: Bach studied the thorough bass by analyzing and transcribing works of other composers.

But I would point out that this actually means:

Bach studied the embellished organ choral style by writing figures in the descant and other voices (variations of motifs or musical "subjects") and in the bass line. ("flourished" counterpoint).

A quite different interpretation of figure work could concern Bachs well known symbolism in motifs and number as it is described here:

Symbolism A repertoire of melody types existed, for example, that was generated by an explicit “doctrine of figures” that created musical equivalents for the figures of speech in the art of rhetoric. Closely related to these “figures” are such examples of pictorial symbolism in which the composer writes, say, a rising scale to match words that speak of rising from the dead or a descending chromatic scale (depicting a howl of pain) to sorrowful words. Pictorial symbolism of this kind occurs only in connection with words—in vocal music and in chorale preludes, where the words of the chorale are in the listener’s mind. There is no point in looking for resurrection motifs in The Well-Tempered Clavier. Pictorialism, even when not codified into a doctrine, seems to be a fundamental musical instinct and essentially an expressive device. It can, however, become more abstract, as in the case of number symbolism, a phenomenon observed too often in the works of Bach to be dismissed out of hand.

Number symbolism is sometimes pictorial; in the St. Matthew Passion it is reasonable that the question “Lord, is it I?” should be asked 11 times, once by each of the faithful disciples. But the deliberate search for such symbolism in Bach’s music can be taken too far. Almost any number may be called “symbolic” (3, 6, 7, 10, 11, 12, 14, and 41 are only a few examples); any multiple of such a number is itself symbolic; and the number of sharps in a key signature, notes in a melody, measures in a piece, and so on may all be considered significant. As a result, it is easy to find symbolic numbers anywhere, but ridiculous to suppose that such discoveries invariably have a meaning.

So if this is not an answer to your unclear question I have found at least an answer to mine: a figure in English is more than just a number ..

Not the answer you're looking for? Browse other questions tagged technique analysis or ask your own question.

1
problem with guitar intro on ELPs “From the Beginning”
6
Why does the IV - V♯ - I chord progression work so well?
3
Bending with the “super light” strings
2
Experimenting with the pickups magnetic field to create new music /effects
5
Having a hard time with the black keys
3
How do you transform tune or hum in your mind to actual music on guitar
6
How do I own the music?
0
What is the musical form of Saint-Saens Danse Macabre?
1
What are the characteristics of an easy piece to conduct? Examples?
4
The Meaning of a Musical Idea