In percussion notation, how does one interpret a slurred tremolo?

My question is about tied/slurred tremolos in percussion music notation.

I've had my bongo drums for almost half my life, and am just now deciding to buy a book and learn how to play Afro-Cuban rhythms rather than just messing around with whatever comes out of my brain.

Going through the rhythms, Trevor Salloum's "The Bongo Book" notates rolls with slurs and ties: 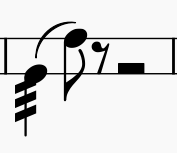 Clarification: playing with hands and not sticks

3 slashes on a note means to play as many notes as possible in the space of that one note duration. The exact number of notes is not specified because it will depend on the tempo. This is the standard way to notate an unmeasured roll for percussion instruments (and tremolo for string instruments). If you see this in snare drum notation, then it would be called a buzz roll. The note after the roll is played totally normally. Just one note. The slur/tie is more of a gestural thing, showing that the roll goes all the way to the next note, leading into it. They are part of the same musical gesture.

This is a notational shorthand which saves the composer work and makes the score easier to read for the performer. You see this a lot in string parts. When you get to 3 slashes, it becomes "as many as possible", basically, and is called unmeasured tremolo, or usually just tremolo. If you see this in drum notation, for instance a group of eighth notes where 1 note has 1 slash through its stem, then it's meant to be 2 sixteenth notes performed as a double stroke.

sources: "Bowed Tremolo: A single pitch is repeated as often as possible during the length of the written note by means of short, quick up- and -down-bow strokes." - Adler, The Study of Orchestration, 3rd ed., p.29

http://learndrumsforfree.com/2018/04/reading-buzz-rolls-and-double-stroke-markings/ (covers both percussion and string usage of this notation)

@ibonyun made a comment in the comments section to his answer. I need to answer with images which can not be done as a comment, besides there is also a need for this subject to be further sorted out.

LarsPeterSchultz I have never seen more than 3 slashes. Can you show me an example? It would certainly be non-standard. Yes, the 3 slashes can also mean 32nd notes, but that's rarely what is intended. Even at slow tempos, 99.9% of the time "as fast as possible" is what the composer wants.

You need more knowledge and/or information on this matter. I have seen tremolo with 4 slashes many times. The tempo does matter.

Here is an example from Dvorak's 9th symphony. This image is from the 1.st violin part. Note the 4 slashes for the tremolo in the slow part, Adagio, and the 3 slashes in the next part, Allegro Molto:

Sometimes there are discussions among musicians whether to play unmeasured or measured if the tempo allows a measured version. Note that among string players the term "tremolo" is applied in the meaning unmeasured tremolo, so it can happen that a composer write "tremolo" or "trem." in a string part in order to clarify that it should be unmeasured tremolo. Here is an image from Bruckner's symphony 5, it is the violin 2 part:

In percussion parts it is common to write Tr (trill) instead of slashes under the notes (although slashes can be used). "Tr" occurs often in timpany and snare drum parts. Here is an example from Mahler symphony 2, snare drum part: 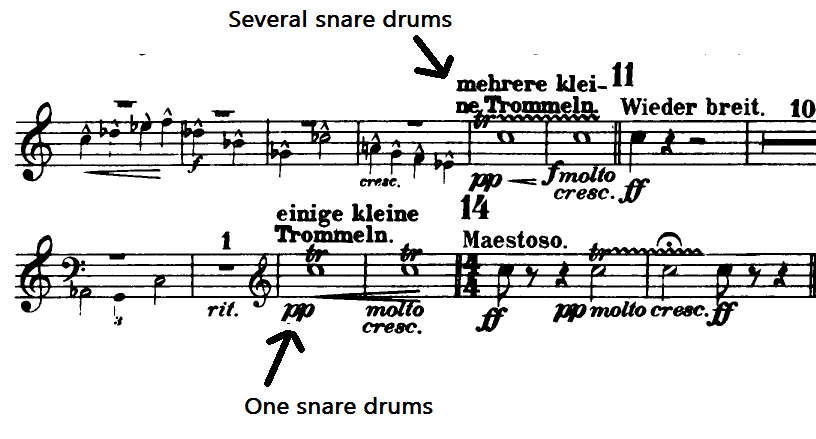 And finally an image with a fraction from the solo piano part in Beethoven's 3rd piano concerto, second movement:

Because of a comment @ibonyun wrote below I find I need to make an elaboration to this answer as follows:

... To reiterate, 4 slashes is exceptional, as in non-standard, and 99% of the time 3 slashes means unmeasured tremolo...

You are correct that 3 slashes are much more common, but there is certainly nothing non-standard with 4 slashes. I am quite surprised by encountering that idea. As I said above I have seen tremolo with 4 slashes many times.

There are sometimes discussions amongst musicians, including conductors, on whether to play measured or unmeasured tremolo even when there are 4 slashes. It can also happen that a composer wants 4 slashes played measured although that is probably rare. Below I have posted two images with examples of tremolo with 4 slashes.

First an image from the book "The Cambridge Guide to Orchestration" by Ertuğrul Sevsay: 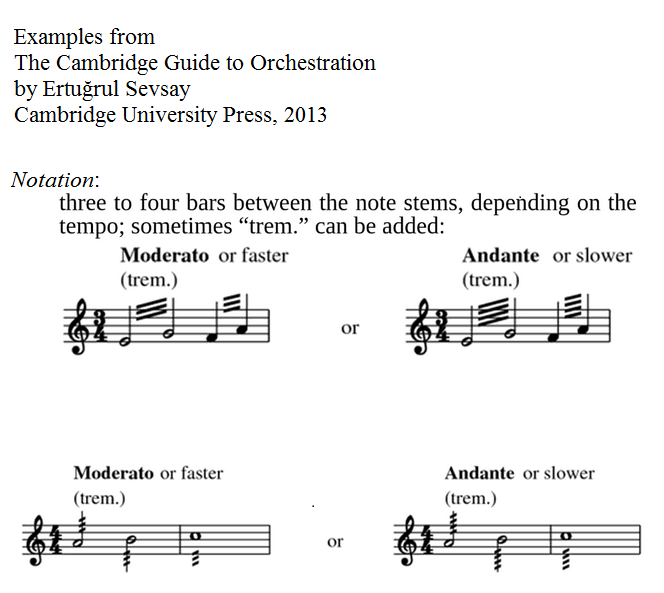 Second an image I made with four examples of 4 slashed tremolo written by different composers: 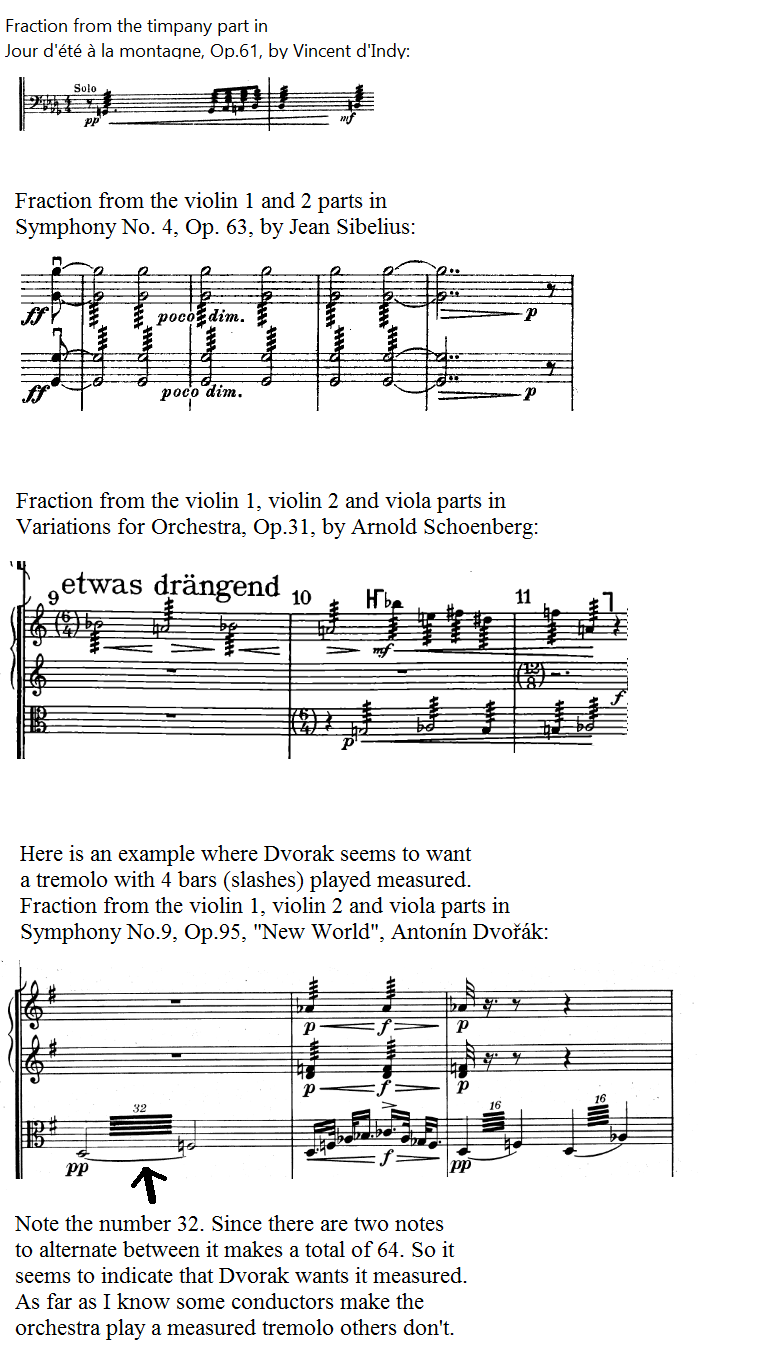 Afro-Cuban doesn't admit a range of tempos broad enough to admit a Beethoven Adagio. This genre won't include examples with four or five slashes. Three means as fast as possible.

Not the answer you're looking for? Browse other questions tagged notation percussion or ask your own question.

16
How to interpret this chord notation?
6
Simplified notation for two-note tremolo
2
How can I improve my interpretation of rhythm and percussion?
2
How to interpret a finger slap notation on a guitar tab?
4
Understanding and distinguishing piano slurs and phrases
5
Why does unpitched percussion play a less prominent role in classical music than many other genres?
5
How to interpret the '3' notation underneath the first two quavers?
2
Is it possible to combine accent and tremolo in notation?
4
Percussion duration notation issue