Measuring key-relatedness of chords on the circle of fifths

Is there an easy way to visualise scale-degree triads for a given key, based on the circle of fifths? And to also use the circle to 'measure' how distant a given out-of-key chord is to our home key? I thought that the answer to both these questions amounts to steps one needs to take on the circle of fifths, but clearly I've misunderstood this.

Assume a piece is in the key of C major. The most related chords to the tonic would then be d, e, F, G, a, and b0. Clearly, even if one puts aside the minor mode of the 2nd, 3rd and 6th scale degrees, it is not the case that these chords are nearest to C on the circle. For instance, B-flat is only 2 steps away from C, whereas the in-key chord E is 4 steps away.

CoFs below, for easier visualisation. 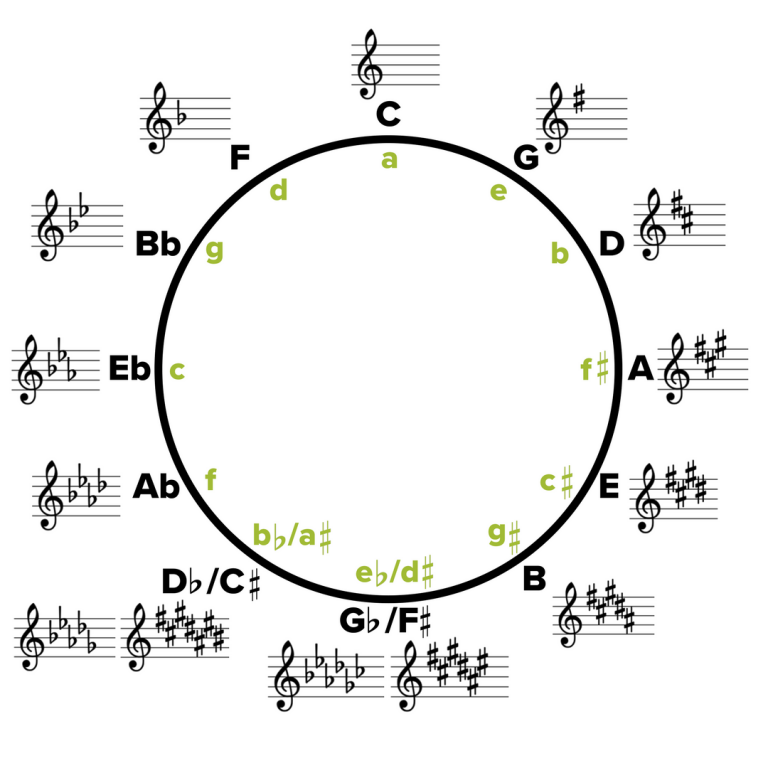 I thought that the answer to both these questions amounts to steps one needs to take on the circle of fifths...

You are conflating the two circle of fifths.

Circle of fifths progression is visually represented like this:

Circle of fifth key signatures is visually represented like this: 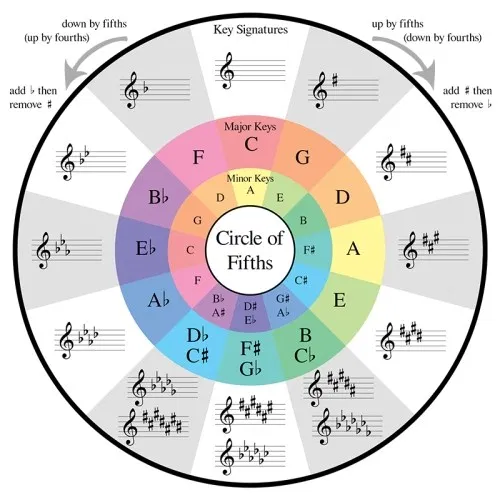 Is there an easy way to visualise... And to also use the circle to 'measure' how distant a given out-of-key chord is to our home key? For instance, B-flat is only 2 steps away from C, whereas the in-key chord E is 4 steps away.

Roman numerals are used to label chords in relation to the key signature not the circle of fifths.

In C major the E minor is the diatonic triad build on the third scale degree. It's labelled like this:

In that case the tonic is C, but you can make a sort of temporary or secondary reference using one of C major's diatonic chords using a slash notation. If we are in C major and then use a D major chord, we can say D major is the dominant of G major which is the dominant of C major, and then label it like this:

If you compare that to the circle of fifths of keys, it is two steps away.

You can have other secondary chords. An A major chord is the dominant of D minor. D minor is the ii chord. The secondary label is then:

You would say that out loud as "five of two" resolving to the "two chord."

That A major chord is three steps away on the circle of fifths of keys, but that is more or less coincidental. The important thing is the secondary dominant relationship, and that is an immediate relationship to the ii chord.

You can look at two elements in the case of C: V/ii ii or A major to D minor in the key of C major.

In harmonic analysis the second point is the important one!

The chord B flat major in the key C major presents an interesting and different kind of relationship which can be looked at two ways: a secondary chord or a borrowed chord.

Borrowed chord are chord that can be found in the parallel key. C minor is the parallel minor of C major. In C minor B flat major is the VII chord build on the lowered seventh scale degree. In Roman numerals we use upper case to show the chord is major and add a flat sign to show the chord root has been lowered from the major mode:

In terms of measuring distance the secondary subdominant comes from a key which is one step away on the circle of fifth: B flat comes from the key of F which is one flat different from C major.

When thinking of the measure of the borrowed chord, I suppose you could say there is no distance because the tonic doesn't change from C major to C minor. Or you could say it is fairly distant, because C minor is three flats different from C major and that is three steps along the circle of fifths of keys. Probably many think of the borrowed chords as colorful because of their chromatic nature, but they aren't distant because the tonic isn't changed.

Using the circle of fourths/fifths, not everything can be simply a couple of steps away. Looking at it, anywhere you like will have the I, with its IV on one side and its V on the other side. That's pretty straightforward. But there's no reason why the other 'related' cords - the three minors and the diminished - should be anywhere near.

The diminished you can come up with your own formula! And I don't understand the last part of the question.

You already accepted an answer, but I'll just add an edited version of the circle of fifths picture. I've added groups of 3+3 basic chords for each key signature. In this sense, if you're in the key of C, an E major chord is not much of a step at all. It's in the same group of six basic chords, just on the other side of the line that separates the three basic chords of the major key and the three chords of the relative minor key. You need to know where the tonic is. That's your home base, and it's shown in the circle picture as the central chord in each key. When you know where that is, all other six chords are in the same "room". As long as you stay in the same room, you don't have to take any steps to grab any of the six chords, they're all within reach, within arm's length!

This is for vanilla pop song harmony, no special modes or anything. . In e.g. A dorian, you would have D major instead of D minor. Major chords are assumed as dominants on the minor side.

What comes to half-diminished seventh chord of the seventh scale degree, you can think of it as a slightly different ii chord. For example in C/Am, Bm7-5 can be thought of as a Dm6/B, so it's accounted for inside the "d" in the lower left corner. And we don't have to add a seventh letter for each key in the picture. :)

In this next picture the corresponding scale/chord degrees within each key are shown on top of the chords. The picture gets too messy already, but I guess you get the idea. I showed the dominants for the minor side just as the relative major key's "III" to keep things simpler and not have to talk about "i and V" for the minor side.

Maybe this helps you understand what a B or B7 chord does in a song that's in A minor of C major. That's none of the six chords in C/Am, so you can look at it as "borrowed" from the neighboring key.

Another example is Bb chord in the key of C. In the circle of fifths, it's just one step away if you think of it as being the IV of F major.

Myself, I never understood the use of the circle of fifths picture and the whole hype about the circle. I learned to know keys by playing songs, and each group of chords is a known thing in itself for me. I recommend trying to eventually get past the circle picture so that you just know all the keys like you know your home. This is best done by playing songs by ear in all keys. (IMO)

One more thing. Visualizing a "fifths" chord progression like "Fly Me to the Moon" happening inside a key could look like this: 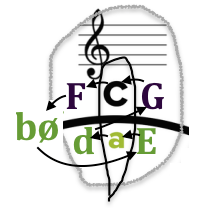 It's a compromise from the "looks like a circle" point of view, because C/Am, F/Dm and G/E are shown vertically as pairs.

0
What determines the correlation between musical scales?

8
How to determine what key changes are appropriate?
29
Understanding minor key harmony
17
Are there any rules of thumb for shifting the key signature within a tone net?
3
Music Theory, Circle of Fifth, Chords that fit, Exceptions and example song “Sultans of Swing”
4
What key is a piece in if an augmented chord is used as a dominant?
4
Chromatic 7th chords going upwards in Beethoven
3
Does minor/major affect scale degrees when talking about chords?
3
Minor Key (and other key?) Roman Numeral Analysis
1
Using an augmented chord to modulate to a distant key, will this work?