As the fully diminished chords are not present naturally on major keys, I suppose that they are borrowed from their parallel key. Then,

I think this could be especially important with fully diminished chords, as depending on their inversions they can be different chords (for example, G°7 = Bb°7/Abb = Db°7/Abb = E°7/G, and all their enharmonic equivalents). Then, knowing the degree would determine the name of the chord (and vice versa).

For example, in the extract of Schumann's Widmung shown bellow, would the 8th chord be a G°7/Db? And would it act as a vii of Ab major?

Then, on the 5th chord, which degree would correspond to the Ebø7/Db? And at the 11th chord Bbø7 would act as the ii of Ab? 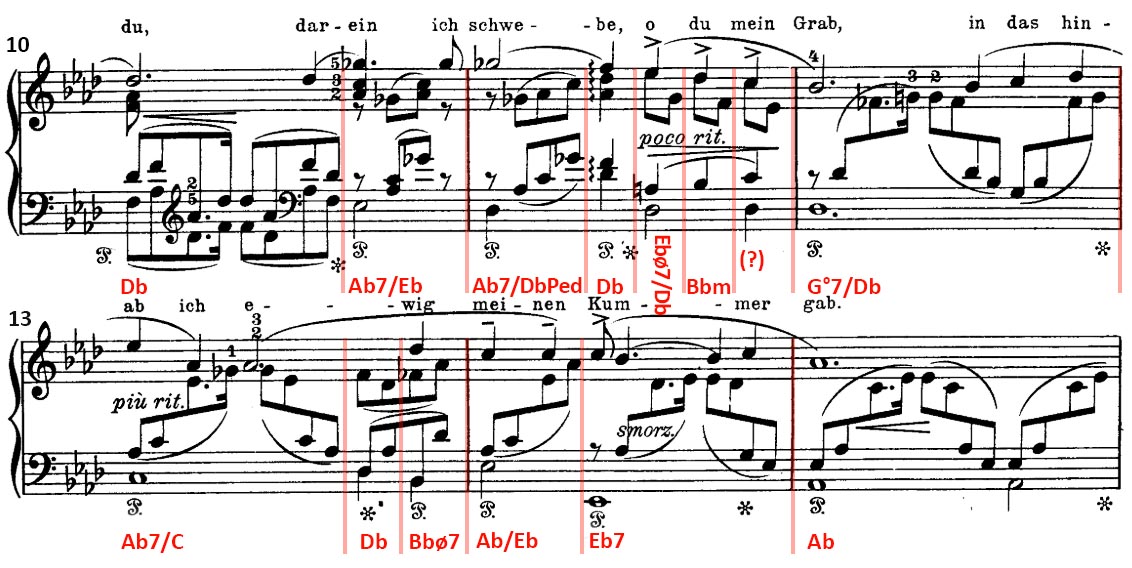 Note 1: this analysis is made by me, there could be errors...

For your first example, your chord in bar 12 would be a viio7 of A♭. Stacked in thirds, that would be G-B♭-D♭-F♭. If you use inversion notation with Roman numerals, it would be viio4/3, which resolves to I6.

Half-diminished sevenths can also function as iiø7 chords, as on the last chord of bar 13 in your excerpt (which borrows the F♭ from the minor mode).

The other chord in your excerpt in the middle of bar 11 is trickier. Yes, you might at first think it is enharmonically equivalent to a half-diminished seventh built on E♭, but that's not how it functions. If it were functioning as a viiø7 built on E♭, the E♭ would act as a leading tone and resolve up to F♭, which the chord doesn't do. And if it were acting as a iiø7, it would be functioning in the local key of D♭ and should usually resolve to V in D♭ (that is, A♭), again, which it doesn't do.

So what is this mystery chord? The key is the spelling. The way the notes are spelled is important, as they often tell how the individual notes are functioning. This chord is not spelled like a E♭ø7, which would have a B♭♭ instead of an A♮. The A♮ actually indicates it's part of the "active" interval of that chord -- the actual diminished seventh interval that resolves to the next chord is A♮-G♭, which resolves inward to B♭-F. One could therefore better think of this chord as an Ao7 without the C, that resolves to the next chord of B♭ minor, all over a D♭ pedal note. (Even better, I might not even think of these as individual "chords" at all, but rather just connecting notes -- passing tones -- between the previous harmony of the bar with descending lines in the right hand and an implied ascending A♭-A♮-B♭ in the left hand with its chromatic passing tone, all over a D♭ pedal.)

Lastly, to your "?" chord: that, I really wouldn't call a "chord" at all. Just like the chord I discussed in the previous paragraph, this is best thought of as connecting lines with a bunch of passing tones: D♭-C-B♭ and F-E♭-D♭ in the right hand, with C and E♭ as passing tones, while there's an ascending B♭-C-D♭ line in the left hand with passing note C, again over a D♭ pedal note.

It's important to remember that chordal analysis is a tool, but it's not necessarily representative of the way music is put together. Composers like Schumann would have spent a lot of time learning counterpoint and probably wouldn't have learned chordal analysis anything like what we do today. To him, all of these chromatic notes were not about building "diminished seventh chords" but rather about how individual lines in the accompaniment resolved and moved, introducing chromatic notes for color and sometimes to add tension that can then resolve. As you encounter increasingly chromatic music, keep in mind that many times a "chord" isn't really a "chord," but just a set of simultaneous notes, each of which has a different direction that they want to resolve to.

When a fully diminished appears, it is considered as the vii degree of the chord to which it resolves?

YMMV, but my usual first-try idea for trying to "understand" a dim7 is to try and see it as a dominant chord for something. G#dim7 could be an E7 or G7 or Bb7 or Db7 in disguise. The expected something may not actually appear, but it doesn't mean that my idea was invalid. Harmony may change its mind every second. Maybe the tune was leading to some direction but ended up somewhere else as a surprise.

And, when a half-diminished chord that doesn't belong to the key appears, is it considered a ii degree of the chord to which it resolves?

Maybe it can do the job of the ii degree of something. In the key of C major, Dm7-5 can be a iv minor i.e. Fm in disguise. It can also plausibly lead to C minor or any of the related chords, like Eb if you see the Dm7-5 as a rootless Bb9. Or it can be some sort of a makeshift E7, leading to Am.

This is a good example to demonstrate once more how useful and practical solfege and movable do can be:

The dim vii chord (vii07 or vii-7) has dominant function and can be considered as a Vb9 substitution (without root tone) resolving into the tonic:

N.B. each degree can have a secondary vii-dim7:

your example contains this latter case:

If we add the 2 chords in question we get a full dim7:

(the ? chord I’d consider generously as the same game - yes, the a is missing but we have it still in the ear.)

Not the answer you're looking for? Browse other questions tagged harmony functional-harmony or ask your own question.

1
How to determine the key and write melodies for a chromatic chord progression?
13
Why do we only build 7th chords on the supertonic and dominant of a major scale?
5
Is the diminished chord not as relevant as the other diatonic chords?
6
Diminished chord constructed over the tonic degree?
2
How do the alternating C and Db function in this modulation?
3
Diminished seventh cadence, is this an IAC or a PAC?
4
Diminished seventh spelling but functioning as an Augmented Sixth?
2
How is D7 functioning here? Applied chord both kind of does and doesn't fit