How am I supposed to orchestrate a D7 when the chordal seventh is emphasized?

This is something I have come across as I try to orchestrate Eine Kleine Nachtmusik for a symphony orchestra. A sort of harmonic ambiguity on Mozart's part. I'm talking about the chord at the repeat of the opening motive. This chord right here:

That is literally just C in 3 octaves. I orchestrated it as a C major chord on that downbeat. But I have been told that what Mozart truly meant by those octave C's is a D7 chord. Um, I don't usually come across octaves in a seventh chord voicing as the only interval. Usually I will at least hear the root, third, and seventh being played simultaneously or possibly the root, fifth, and seventh. Just the tritone alone implies a diminished harmony and just the perfect fifth alone implies a major harmony. A whole phrase in octaves, I normally see that in one of 2 situations:

This is neither of these 2 situations. Of course the tonic is confirmed, it is the first 4 bars. Mozart isn't going to diverge from the tonic that quickly And it isn't quiet and then intensified, it is a full blown forte followed by a quiet phrase. And the C's in octaves, well C is part of multiple chords in G major, but the most likely ones are D7 and C major.

I orchestrated the downbeat as a C major chord and it sounds good. I try to orchestrate it as a D7 and it gets nasty sounding in the orchestra. This here is my C major orchestration of that downbeat: 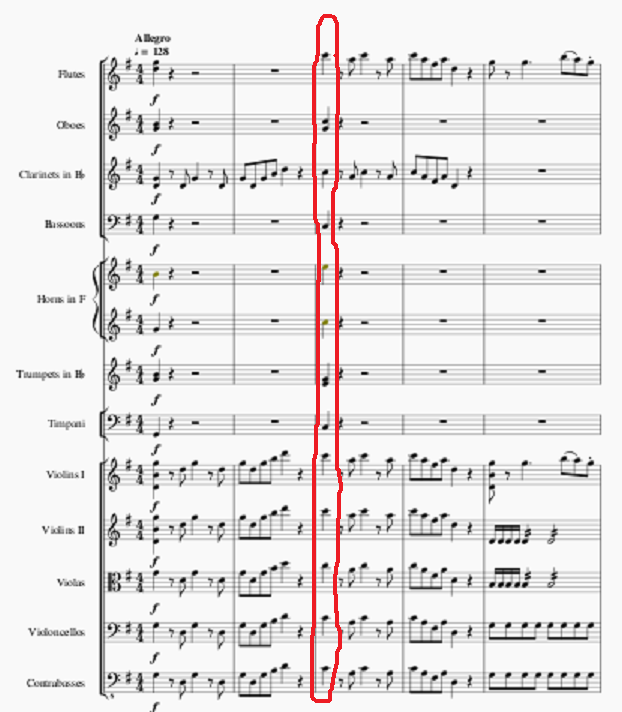 Just to make it clear, the image was taken with the instruments being in concert pitch, so I haven't written the Clarinet, Trumpet, and Horn parts wrong.

If I try to orchestrate it as a D7, the strings being in octave C's like in the original score really nasties up that D7 by emphasizing the chordal seventh. And yet I get told that I should orchestrate it as a D7, per Mozart's intentions. But, to me, it isn't clear whether Mozart intended the downbeat to be a D7 or a C major chord because of the octave C's and nothing else.

Did Mozart intend this as being a D7? If so, then how could I orchestrate that chord to be a D7 without the chordal seventh making it sound nasty(I do have the strings playing the original notes, those octave C's that I keep mentioning)? Or is my interpretation of the octave C's as a brief C major chord within a melodic D7 just as valid and thus I shouldn't change anything about how I orchestrate that chord?

Mozart clearly implies a D7 chord, but if you want to write a C major chord there's nothing to stop you (but maybe you'll hear Mozart turning in his grave). If you do decide to write D7 than you have to make it work by voicing it well. That almost certainly means starting with the root in the bass instruments (including cello/bass). But if a unison C was good enough for Mozart it should be good enough for you.

The first two bars are a G major chord. The next two are a D7 chord. Nothing ambiguous about that (although, of course, a re-harmonisation is always possible).

If your task was to orchestrate, do just that. Keep it as a unison texture. Your job is to choose what instruments to use, not to re-compose it.

Mozart filled in the G chord at the beginning. He chose not to fill in the first note of bar 3. In a chord, the C, as the 7th in a dominant 7th chord would have stood out too much. As a unison, it's fine.

What's wrong with orchestrating it exactly as Mozart wrote it - a unison C?

You are absolutely right, it is harmonically ambiguous. That's the whole point of it. Making it unambiguous is as stupid as writing a three-volume treatise explaining why the chicken crossed the road, IMO.

Not the answer you're looking for? Browse other questions tagged chords orchestration mozart or ask your own question.

17
How to memorize seventh chords and inversions on piano?
1
What exactly is block harmony?
8
How to make the dominant preparation less boring?
4
Did Beethoven really usher in the Romantic Period?
2
Orchestration question: Should I change which woodwinds get which lines?
1
Is it possible to stick too closely to Mozart in an arrangement?
1
Is the Presto in Mozart's Divertimento in D in Ternary form or a Rondo?
2
Unnecessary and confusing bass clef in Mozart's Fantasia in D minor, Why?
4
A chord with only the root note
1
First Movement of Mozart's Horn Concerto no. 2, is it Sonata Form or Rondo Form?