Is it possible to "read" guitar chords just by watching a guitarist on youtube? How can this be studied?

I'm trying to copy the chords of a Guitar player on youtube, but I don't know how to identify the chords by watching. How can I start to learn this?

Link to the video:

string 2 is actually part of the barré, so:

Normally I can recognize a root pattern like a-minor or E-major, than you need just to add the position of the barré finger or the capo.

fret 5 tells me the 4th which you use for tuning. etc ... so always try to identify the bass tones and the highest string first then you have some hints.

My first reading was wrong: I thought this chord is Ab-major ... (completely wrong!)

So I had to take the Guitar and now let's go to listen at the song. :)

So looking and listening at the video we can see that he plays twice the shapes of C G am F (with the capo IV this is E B c#m A = 4 semitones higher).

then he goes up to the region where I was not at home:

but he doesn't play a chord:

we hear just the melody so ...la ti do mi unaccompanied:

followed by the sub dominant A

well, if we listen very precisely and watch accurately we can hear and see a rhythm 2,3,4 to the highest E, the long note (so I assume he is touching the B and G string softly with the index of the right hand, but we can't hear an A that means the B string is touched by the index finger of the left hand.

Finally to get more clearness: From which chord can this position be derived?

E,B,G are open, D is hold in the 2nd fret with the ring-finger. Transpose this 4 string chord in all frets as a barré chord, you'll get all minor chords from E to D#

Now add a G in fret 3 of the 1st string and you get this shape of a four string minor chord with a 3rd as highest tone. You can transpose it everywhere like the normal e-minor chord. 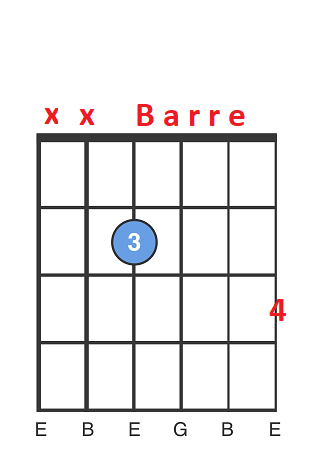 9
What type of exercises should a guitar beginner do?
2
How to play barre chords high up on the neck
2
What type of songs frequently use chords that are a half step apart (like the E and F chords)?
2
What key fits with the chords Em7, F#m7, and B7#5?
5
How do guitar notes relate to chords?
9
Dm6 Chord, why is it B and not Bb?
13
How was the D chord constructed?
6
Can this chord be played or is it transcribed incorrectly?
2
How to identify notes in a key that sound better while improvising?