Recently when playing in a piano trio as a cellist, my teacher told me that a note can have a small range of correct pitches depending on the chord.

Shouldn’t everybody try to play exactly in tune with the piano since it has the definitive pitch for each note?

The piano might not even be playing. If it is, it is indeed probably the best reference.

However in other circumstances it is possible that you would play a slightly different pitch for (example) an E natural as the major third on a C chord, compared to the fifth on an A chord.

To understand why this is, you need to understand how intervals (like major third, perfect fifth) are derived from the harmonic series, and the fact that dividing an octave into 12 equally spaced pitches is a bit of a compromise (a necessary one that allows us to play a piano in 12 keys without needing to retune it when we change!) Here is an explanation.

However stringed (and other) instruments are microtonal in nature, and the player should tune by listening to the other players, and also by having some knowledge of the function the note she is playing has harmonically.

When the harmony you are playing is not strict major/minor (for instance a sax section playing jazz voicings with lots of "colour" notes and no fifth) it's even a bit more hard to pin down as the harmonies are intentionally "slightly out of tune" anyway. Playing in a sax/brass section is a lot more sensitive to tuning when the arranger wrote parts that have major triads or even simpler harmony. (This from experience!)

It's a pretty deep subject and one that takes a bit of getting your head around, but in general listening to what sounds best is a good starting point. (People with more experience of chamber music may know of more precise methods than I do.)

This is really going to depend on the music. For example, if you are playing a first-inversion major chord (for example, you have a G♯ in an E-major chord) then your pitch should be lower than it would otherwise be (assuming that the E and B played by the other strings are in tune with the piano). However, nobody will notice this much unless the chord is sustained (and even then it will only be very noticeable if it is played with little or no vibrato).

If the strings are playing a sustained passage while the piano is flying around in sixteenth notes, then you don't need to worry nearly as much about matching the E on the piano; instead, you should pay attention to the sonority of the string chord. By contrast, if the piano has a sustained note, you may want to match it. If the cello part doubles the bass part in the piano, you will almost certainly want to match the piano. If the cello part takes on more of a tenor role or especially a solo role, then you may want to inflect your tuning a bit more, if the piano part is written to allow it.

The real thing to keep in mind, of course, is that you should do what makes the music sound best. That will vary from one piece to the next, but you should be alert for passages where it sounds better when you tune to your other colleagues rather than to the piano, and that is, I suspect, what your teacher was trying to get at.

As an example, picked out of thin air (or, more precisely, the first result from a search for mozart piano trio sheet music), consider this trio in E major, K 542: 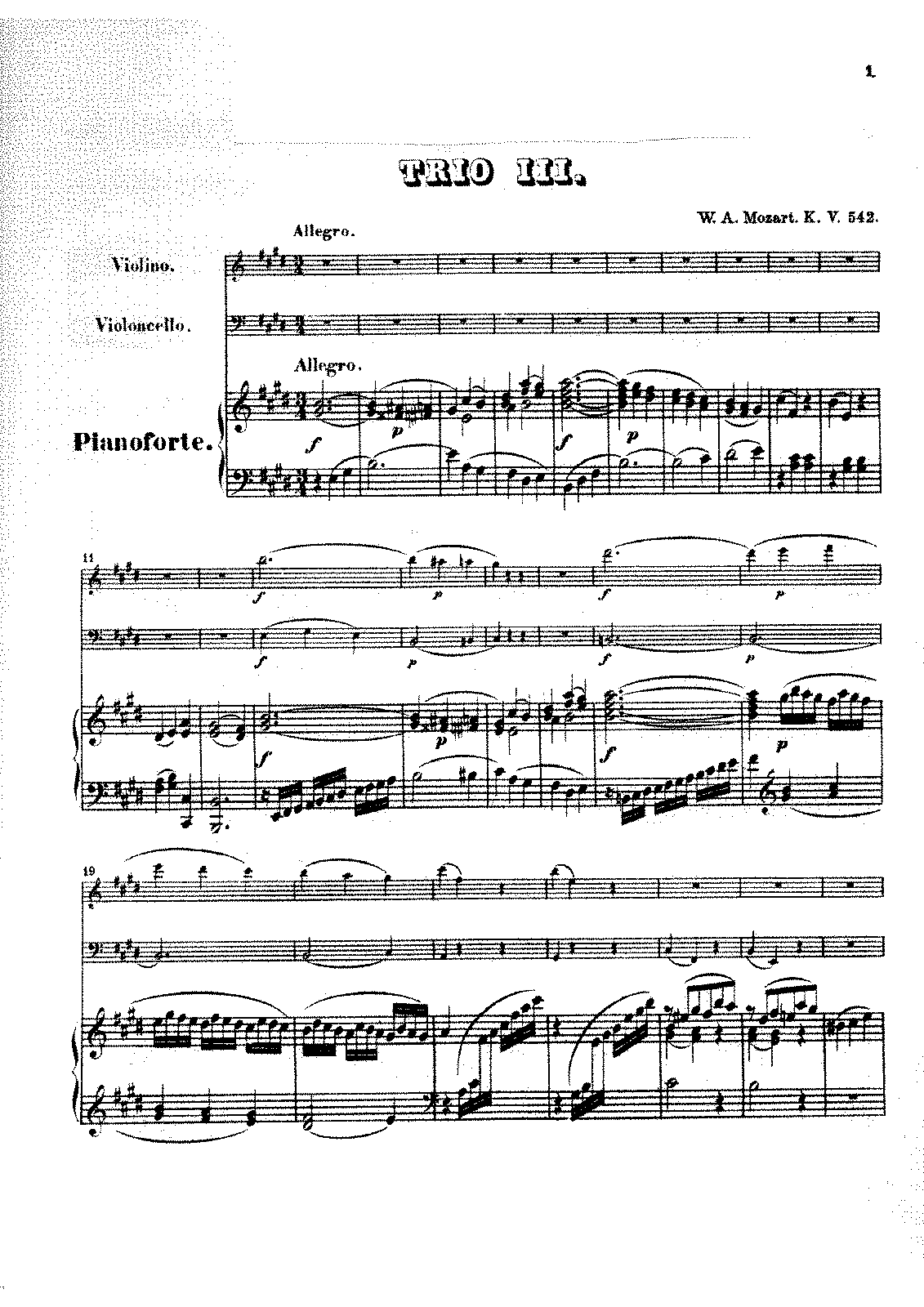 Much of the cello part here is in unison or octaves with the piano, and will have to be tuned to the piano. The C♯ at the third beat of measure 20, however, is not doubled, so you could tune it acoustically to the E in the left hand of the piano part. An acoustic minor tenth has a frequency ratio of 12:5, which is roughly 16 cents wider than than an equal minor tenth. Since the upper note of this interval is played by the piano, you would lower the cello note to make the interval wider.

The A in measure 21 will need to be tuned to the A in the right hand, but the G♯ in measure 22 could be low, because this is the first-inversion chord mentioned in the first paragraph. An acoustically pure major third is roughly 14 cents narrower than an equal-tempered major third. If the violin's B and E are a perfect fifth apart, the violin's B will be two cents higher than the piano's B (this accounts for the difference between the minor third's 16-cent adjustment and the major third's 14-cent adjustment). The frequency ratios for the B and E are 48:5 (6:5 plus three octaves) and 32:5 (8:5 plus two octaves). (Although the notes do not sound simultaneously, there will probably be some G♯ still reverberating when the violinist plays the E.)

In practice, you might find these lowered notes sound flat and dull because, well, they are indeed flat compared to other C♯s and G♯s that you'll hear from the piano. The solution in that case may be to reduce the adjustment rather than to eliminate it altogether. That is, you may find it helpful to compromise between melodic considerations and acoustically "pure" harmonic intervals. Lowering the notes very slightly from the equal-tempered pitch might be an improvement even if going all the way to the acoustically pure pitch isn't.

This question is related to many others about leading tones and equal temperament with good answers and also wikipedia information like this here https://en.wikipedia.org/wiki/Equal_temperament that render excellent explanations with background information so I can give you a short answer without repeating the entire history of music and temperament.

It is a fact that wind instruments and also the human voice like string instruments don’t play the 12 tones always exactly in the same pitch depending their function as leading tones.

The mentioned instruments above can adjust (adapt) the leading tones and also other intervals like 3rd or 5th relating to their melodic and harmonic function.

A brass band leader has always to correct his bandsmen: This note with a sharp has a tension upward, try to play it higher (or opposite: play a flattened accidental note lower).

As the piano has fixed but well tempered tuning the pianist can’t do this adjusting - but the other musicians are able to play the notes according to the piano.

Shouldn’t everybody try to play exactly in tune with the piano since it has the definitive pitch for each note?

They should and they will do it, they even don’t have to mind it, they do it by the ear and they find the tuning. (In opposite to some amateur bands ... what makes them sound sometimes so horrible.)

Not the answer you're looking for? Browse other questions tagged piano chords tuning cello or ask your own question.

14
How can I improve piano proprioception?
2
How can I tune my timpani to different pitches just using a tuning fork or pitch pipe
9
What is an effective way to tune a guitar for an unpracticed ear?
2
How to develop a proper trumpet embochure: Tuning and range
1
High End Guitars - Open string in tune - Fretted string not
8
How should I practice the piano piece Fantaisie-Impromptu?
0
Can a dotted eighth note delay be applied onto a piano piece?
8
How did musicians do “absolute” tuning in the Middle Ages?
2
Is an instrument out of tune really a drawback to having perfect pitch?
5
Reconciling Different Schools of Thought in Piano Technique