Which harmonica to accompany guitar tuned 1/2 step down?

I am a guitar player and I am thinking of trying some harmonica (mouth organ) as well. My guitar is tuned to half step down: E♭ (D♯, G♯, C♯, F♯, A♯, D♯) and most of the songs I play using this tuning. I want to add a harmonica for some ordinary melody. Which key harmonica should I buy?

We usually play songs with chords (not blues). For example, Heart of gold by Neil young. But we play it on our half step down tuned guitar. So, I am confused about it now.

guitar harmonica
Share
Improve this question
edited May 16 '20 at 12:32

Ahh the Neil Young classic "Heart of Gold". That is the song that inspired me to learn to play harmonica and guitar at the same time. It's just not the same without the harp solo.

Many folk songs are played in what's known as "first position" on the harmonica which is they key the song is in. Most blues are played in 2nd position which a 4th higher than the song key. Playing in second position is known as "cross harp" which often features a technique called note bending to play additional notes.

Heart of Gold ends on a G chord and all the chords used are in the key of G major so it can be argued that the key is G. It could also be considered the relative minor of G which is Em. Either way, Neil Young used a G Major Diatonic Harmonica in Heart of Gold and that is what I use as well. Several other songs I play also use the G Major Harp.

Just like you, I like to tune my guitar a half step flat because it's easier for me to sing in that key.

The problem you and I have if we want to play Heart of Gold (or any song in the key of G in first position) a half step flat is that if we use the same chord set as in standard tuning we will be playing the song in the key of F# (or you could call it G flat).

Unfortunately F# harmonicas that are a half step lower than a typical G harmonica are rare. With most harmonica manufacturers who do produce a major diatonic harmonica in the key of F# - that is their highest key and is therefore 6.5 steps sharp vs. 1/2 step flat and is very shrill sounding. What you need to play heart of gold using the Em, D, G and C chord shapes but tuned half step below standard tuning, is a Major Diatonic Harmonica in the key of Low F# (LF#).

I have found two harmonica makers who offer a major diatonic harp in Low F#.

For future reference, I have inserted a handy Key Chart for Major Diatonic Harmonicas below courtesy of the Lee Oskar website. Have fun learning to play harmonica - it's a relatively easy instrument to learn to play in first position. 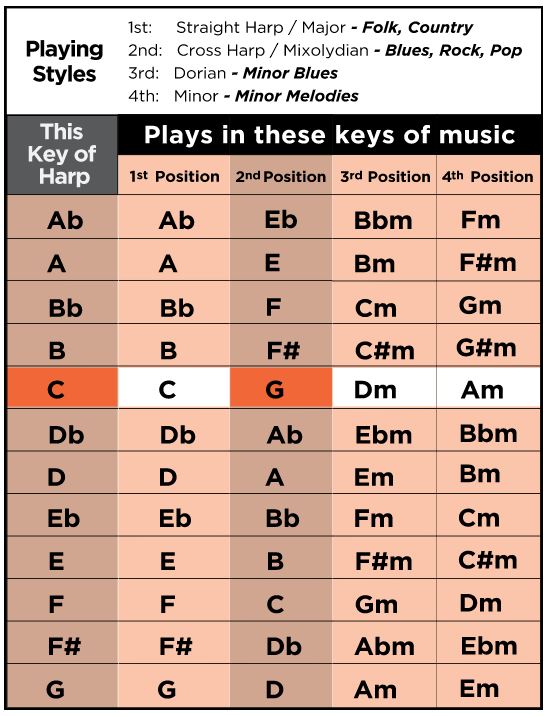 Sets of harmonicas can be purchased - all 12 keys in a big set! But big sets cost big money! You won't be able to use the 'standard' C, F, G, A harps well with your tuning - unless you capo or play barre chords for your songs, so you'll need the others out of the 'big set'.

I'm guessing (have to - sparse info) that songs will be in E♭, A♭ D♭ and G♭ mostly, in real terms. So those are what to go for.

A chromatic would cover all you need, but they take some time to get good at playing in other keys than diatonic C and D♭ (with the button in all the time). But that would only really cover single note playing.

For some chord work, you'll need harps in the appropriate keys, as explained earlier.

Not the answer you're looking for? Browse other questions tagged guitar harmonica or ask your own question.

33
Why do some artists tune their guitars half a step or whole step down?
10
Everyday guitar routine
1
Which key Harmonica to use in conjunction with Distorted Electric Guitar in C#/D half step down
1
My guitar is tuned half step down how can I play along a standard tuned song?
4
Playing in E♭ tuning with capo on the first fret
5
Sustained note out of tune with short note
1
Harmonica key advice sought
5
Choosing the right harmonica and key
2
Why is F sharp the only sharp Major Diatonic Harmonica offered and why is there no G flat harmonica?
4
How does changing a guitar string's tuning affect its timbre?