What is the finger position of this tab?

I don't know how to mute the first string using my left hand. 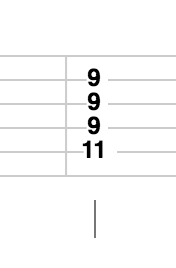 I looked at a video on youtube. It looks like the guy doesn't use fret 11 at all. Why? Sorry I don't know too much music theory.

Should I strictly follow the tab? Or I need to make adjustments?

I think the best answer to your question is that because ultimately it's the same triad chord E maj (E, G# and B). The same note (G#) he ignored on the 11 fret is still there an octave higher on the 2nd string fret9. But, although he's playing the same chord, it's a different voicing of it. The guy looks like playing 2nd, 3rd and 4th strings on fret 9 which is the first inversion 5th (B) - 3rd (G#) - root (E). The tab adds the 3rd in the bass. You can get away with playing either voicings because they sound pretty similar, but if you want to be faithful to the song, pay attention to the bass note, that will help you figure out which one is it. Take it from a guy who used tabs for years, never "strictly" follow tabs, they're made by normal people with normal ears who often make mistakes. Use your own ears as much as you can until you no longer need tabs. Keep rocking \m/

He does look like he is using the 11th fret. In the TAB the lowest line is the low E string. In other words the strings are "upside down" in comparison to how they would be if you are looking at the guitar in someone else's hands. As you look down at your guitar neck while you hold it the strings should appear in the order shown in the TAB.

The "first" string is the high e string and for a chord like this I don't think you mute it with your left hand. Rather, you just don't attack the string with your picking hand.

Not the answer you're looking for? Browse other questions tagged guitar chords electric-guitar or ask your own question.

24
How to hide a flat pick in the right hand when switching to finger picking, Warren Haynes style
3
How does this technique (Beat Tap?) work?
7
Help me to find a way not to bar A-shape guitar chords with my ring finger
8
Left hand position for high fretting (electric guitar)
4
Guitar arpeggios and finger practice
1
Will learning guitar tabs help me improve at learning other tabs/playing melodies?
0
Right-handed newbie with dodgy left index finger tip (knuckle) - What to do?
0
How to find to the right strings of a barre chord by feel?
1
Electric guitar tuning changes in different holding positions
0
Why do tabs show individual notes being played where the song seems to contain strumming?